GAME OF THRONES Season 8 Episode 2 - Can we talk about Jaime?

The second episode of the final season of GAME OF THRONES premiered Sunday night and while it was packed full of tid bits and key dialogue to disect I only want to discuss one key scene. I promise, it doesn't involves Arya or Gendry. (I know, crazy right?)

The scene I want to discuss should come as no surprise. Jaime and Bran's reunion.

The fun begins in the main hall of Winterfell where Jaime has been brought in front of a council consisting of Sansa, Dany, and Jon Snow. Tyrion, Bran, and a few others are also present such as Varys, Missandai and Grey Worm. Dany is questioning Jaime and his motives when Sansa brings up Jaime attacking her father in the streets of King's Landing. Jaime defends himself and says they were at war and everything he did, he did to protect his family. Bran, cool and lathargic as ever replies and I quote, "The things we do for love."

No anger in his voice. No emotion what so ever. Jaime simply has no reply to this. In fact he almost chokes up for a brief moment. Is this Jamie questioning his past motives? Or is he just caught off gaurd by Bran repeating his last words before he shoved him mercilessly out a ten story window?

After Brienne speaks up on Jaime's behalf Sansa decides to give Jaime the benefit of the doubt and Dany has Grey Worm return Jaime's sword to him.

A few minutes later the scene picks back up with Jaime walking up to Bran, who is sitting by himself outside by the Weirwood Tree. This is the first time these two characters have been alone and Jaime says one thing. "I'm sorry for what I did to you." 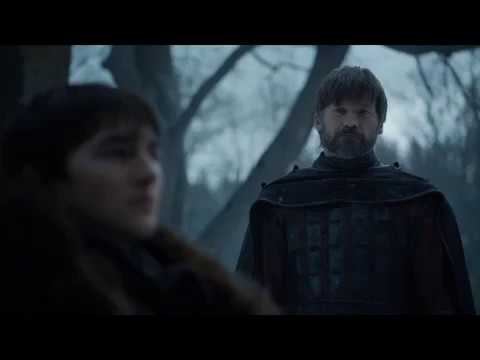 Am I the only one who's jaw dropped when Jaime apologized? His character arc has been quite the journey and I give all the credit in the world to Nikolaj Coster-Waldau for his portrayal of this conflicted man. Still, I did not expect him to simply own it the way he did. No hesitation. As if he'd thought about it several times.

More importantly however, was what was said between them next. Check out the dialogue from the scene below.

BRAN "You weren't sorry then. You were protecting your family."

JAIME "I'm not that person anymore."

BRAN "You still would be. If you hadn't pushed me out of that window. And I would still be Brandon Stark."

BRAN "No. I'm something else now."

JAIME "You're not angry at me?”

BRAN "I'm not angry at anyone."

JAIME "Why didn't you tell them?”

BRAN "You won't be able to help us in this fight if I let them murder you first."

JAIME "What about afterwards?”

BRAN "How do you know there is an afterwards?"

This was some heavy dialogue. Has Bran known almost this whole time that Jaime would be important to this war? If so, why? Is Jaime Azor Ahai, The Prince Who Was Promised? Will Jaime kill the dreaded Night King? There is that golden hand of his...

Or maybe his destiny is to kill his sister Cersei and free Westeros from her cold grasp, allowing someone else to rule. What does Bran see that we don't? I mean, besides everything of course.

What do you think? Is Jaime being saved for something heroic? Is he The Prince Who Was Promised? More importantly, is Brandon creeping anyone else out? Comment below, and until next time, keep on geeking on my friends!