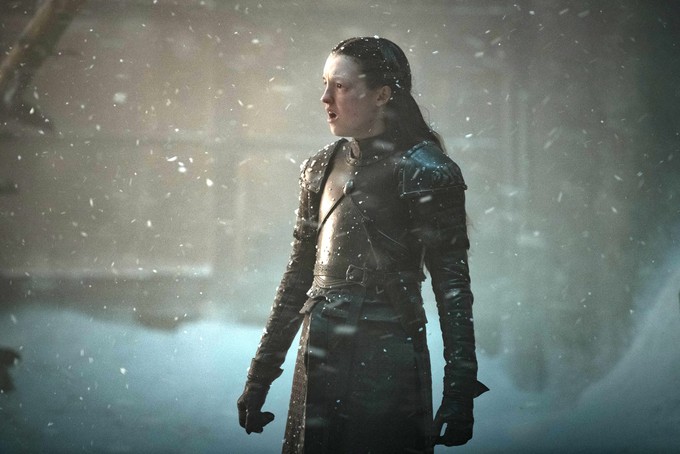 Holy crap, I’m still processing everything that went down in episode 3!  While I take a moment to collect my thoughts, I should point out that what follows will contain tons of spoilers.

One of my favorite aspects of Game of Thrones is how often the story goes in directions I hadn’t anticipated.  Although certain surprises transpire, once I witness them, I realize the story was leading that way all along.  We all kind of knew The Night King needed to die if mankind stood any kind of chance, but how would he die?  From last week’s set-up, I theorized that maybe Theon would get the ultimate redemption by dying in the act of killing The Night King to protect Bran.  I got part of that equation right, the part where he dies.  But really, I should’ve known Theon Greyjoy could never really be a hero.  I mean, every bit of advice he ever gave Rob Stark was bad advice.  With his history of making one wrong decision after another, Theon would do something crazy like run at The Night King with a very predictable and easily averted attack.  Of course, that’s what he did, but at least he died with Bran’s gratitude.

I’ll get back to The Night King’s demise in a bit, but first let’s discuss the battle.  The episode opens up with a sufficient amount of tension as Winterfell prepares for the onslaught of the dead.  Melisandre arms the Dothraki army with fire by touching one of their swords, chanting, and suddenly all their weapons are ablaze.  The Dothraki are the first to rush into the darkness.  I freaking love the visual effect used for this.  All we see in the darkness is the rush of flames moving through it and eventually becoming extinguished.  What an ominous first wave. 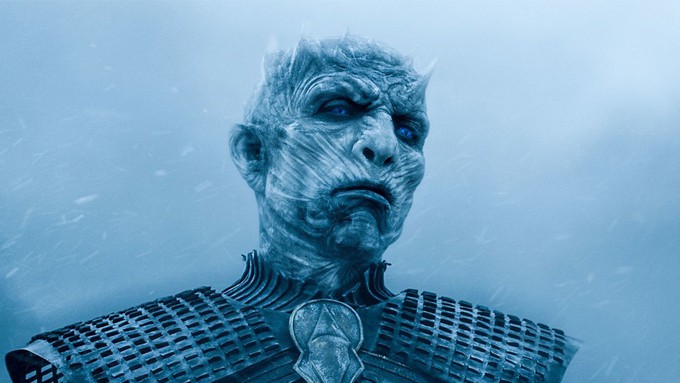 Everyone else watches, staring into the darkness, waiting…and waiting…and waiting.  Sound travels faster than the army and serves to heighten the suspense and sense that everyone is probably going to die.  Suddenly, The Dead rush out of the darkness practically running through people.  Daenerys flies in on her dragon burning large swaths of the Dead Army across the landscape.  Maybe I’m not an expert in battle strategies, but wouldn’t that have been a better way to start things out instead of letting a whole bunch of Dothraki die first?   Come on!  The only thing worse than Dothraki fighting against you would be Dead Dothraki fighting against you.   We all know that those guys are coming back.

Speaking of dead, you can’t have a battle without a body count, and we lost some people this week.  One of the Night’s Watch was the first to die, and he did so right in front of Samwell Tarly.  Poor Sam is not suited for battle, and he ran away as soon as he saw the body fall.

As the Army of the Dead draws closer to the walls, the defenders attempt to light the wood in the trenches surrounding Winterfell.  The flaming arrows land on their marks, but the cold wind blows the flames out before the wood ignites.  Ser Davos enlists Melisandre to help with her earlier-used fire chant.  She does a painfully slow walk towards the trenches.  Seriously, where’s the sense of urgency?  She should’ve run, or at least done a slow jog, but no.  How many people died so she could move dramatically slowly towards the trenches? 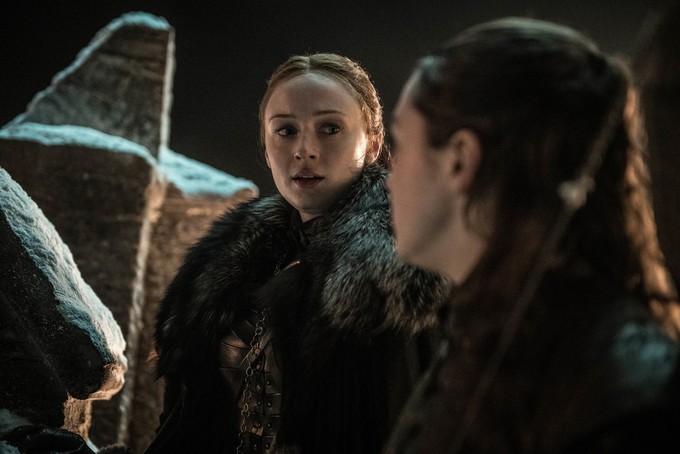 Eventually the dead get into the walls of Winterfell and Lyanna Mormont gets flicked aside by a giant.  The giant kills people left and right, and the young spitfire goes at him, head on!  He grabs her, picks her up, crushing her, but she goes out in style by stabbing him in the eye.  I was devastated to see her die, but I loved that she took out a giant when she went.  Now that’s what a hero looks like!

Speaking of heroes, Arya sports some amazingly awesome moves with the weapon she had Gendry make her.  Once she loses the weapon, she actually becomes the most human I’ve seen her in ages.  She becomes afraid for the first time and begins hiding.  Beric Dondarrion and The Hound save Arya just when you think all is lost.  Beric dies and Melisandre is there to tell him his purpose was fulfilled.

Dragons fly around, with some of the most beautiful images appearing when they are above the smoke and clouds.  Aside from some of the visuals, almost everything occurring with the dragons fighting didn’t excite me as much as I would’ve liked.  When the Night King comes off his dragon, Drogon blows fire at him until Daenerys thinks he’s incinerated.  He isn’t.  He just smiles at her and walks towards Winterfell.  Jon charges after him to kill him, but The Night King raises all the dead bodies, including the ones in the crypts.   Everyone, completely exhausted, is now forced to fight the newly arisen dead and it looks grim.  Jorah Mormont dies defending Daenerys.  Everyone appears weak and all hope seems lost, even Jon appears about to get annihilated by the Ice Dragon.

This is a good time to revisit The Night King.  After killing Theon, he moves steadily towards Bran who just looks up at him.  For a moment, I start to think if those theories about The Night King being Brandon Stark turn out to be true, I’m going to be so pissed!   Just when I think something is going to happen, Arya leaps through the air towards The Night King.  He turns and grabs her by the throat and hand forcing her to drop the knife she was aiming towards his face.  But, the knife falls into her other hand and she stabs him in the chest, killing him and dropping the entire Army of the Dead.  YES!

Next week, the survivors head to King’s Landing.  Already?  It seems so soon.  I suspect Cersei may be a more difficult opponent than the Dead.  Will Bronn kill Jamie, Tyrion, or both of them?  I’ve spoken with a lot of people who think Bronn won’t kill either of them because he’ll have a change of heart.  I disagree.  He’s definitely going to kill at least one of them before he gets taken out.  At least, that’s what I think.  I guess we’ll find out in a week.

Until then, Barbarella (Barbara Kennedy) has some mourning to do. 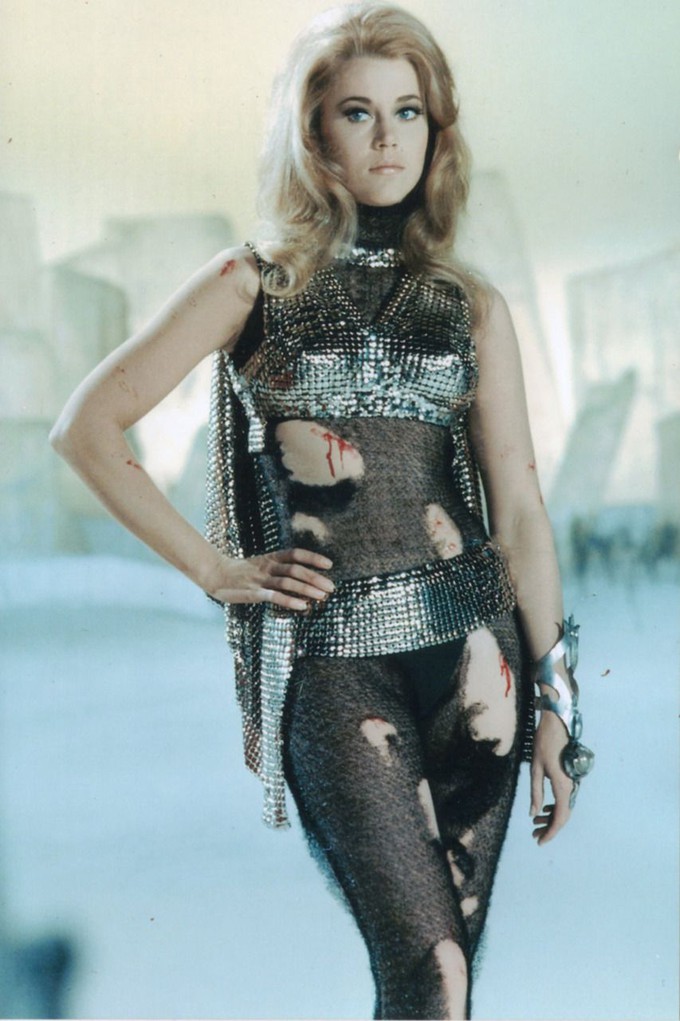