Hey there, fellow horror geeks and monsterphiles! Prometheus here this week’s FRIGHT FIGHT FRIDAY! Sorry for the delay. That said, in these strange times, expect some minor bumps in the road. This week is our Killer Kids Bracket Semi-Finals Round #1, DAMIEN (The Omen) VS DAVID (Village of the Damned)!

Let’s introduce our fighters! As always, intros in the semi-finals and finals will be shorter, as the fighters have already been introduced at length. 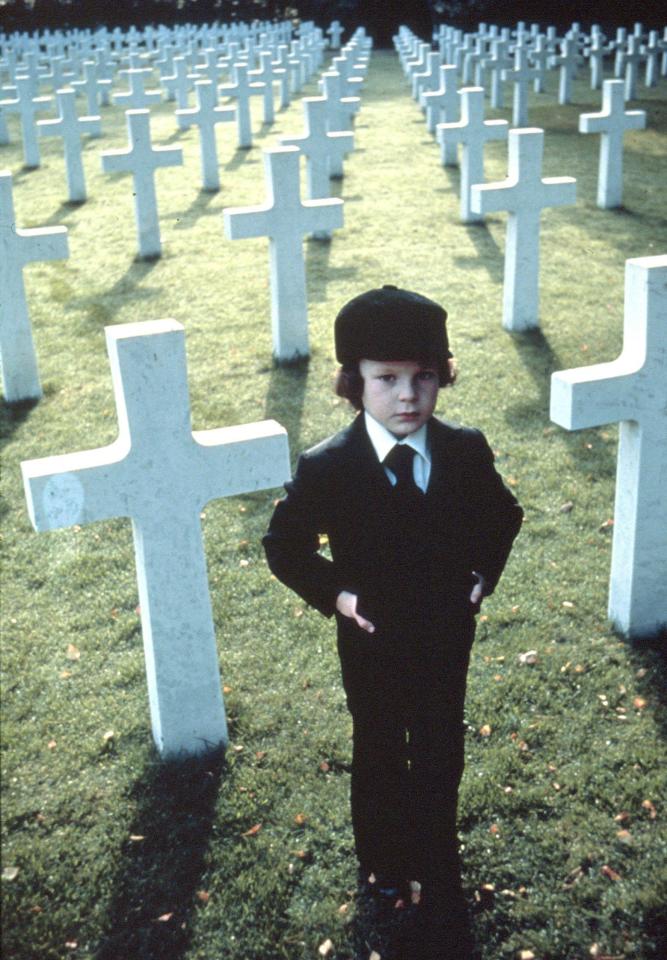 This little dude, in case anybody here is somehow unfamiliar, is the son of the Devil. Like, actually the spawn of Satan. The Anti-Christ, here to bring on nothing short of the apocalypse, Damien’s power is immense. Enough said. 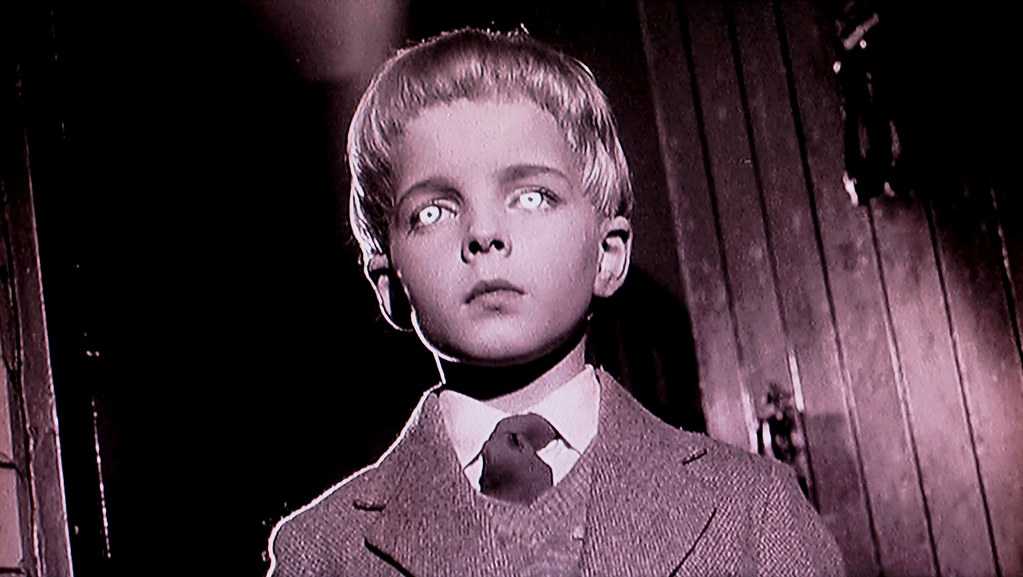 The leader of a strange group of children, all born on the same night to mothers who don’t recall ever getting pregnant. He is wildly intelligent beyond his years and grows at an accelerated rate. He has the power of suggestion, telepathy and can move objects with his mind. 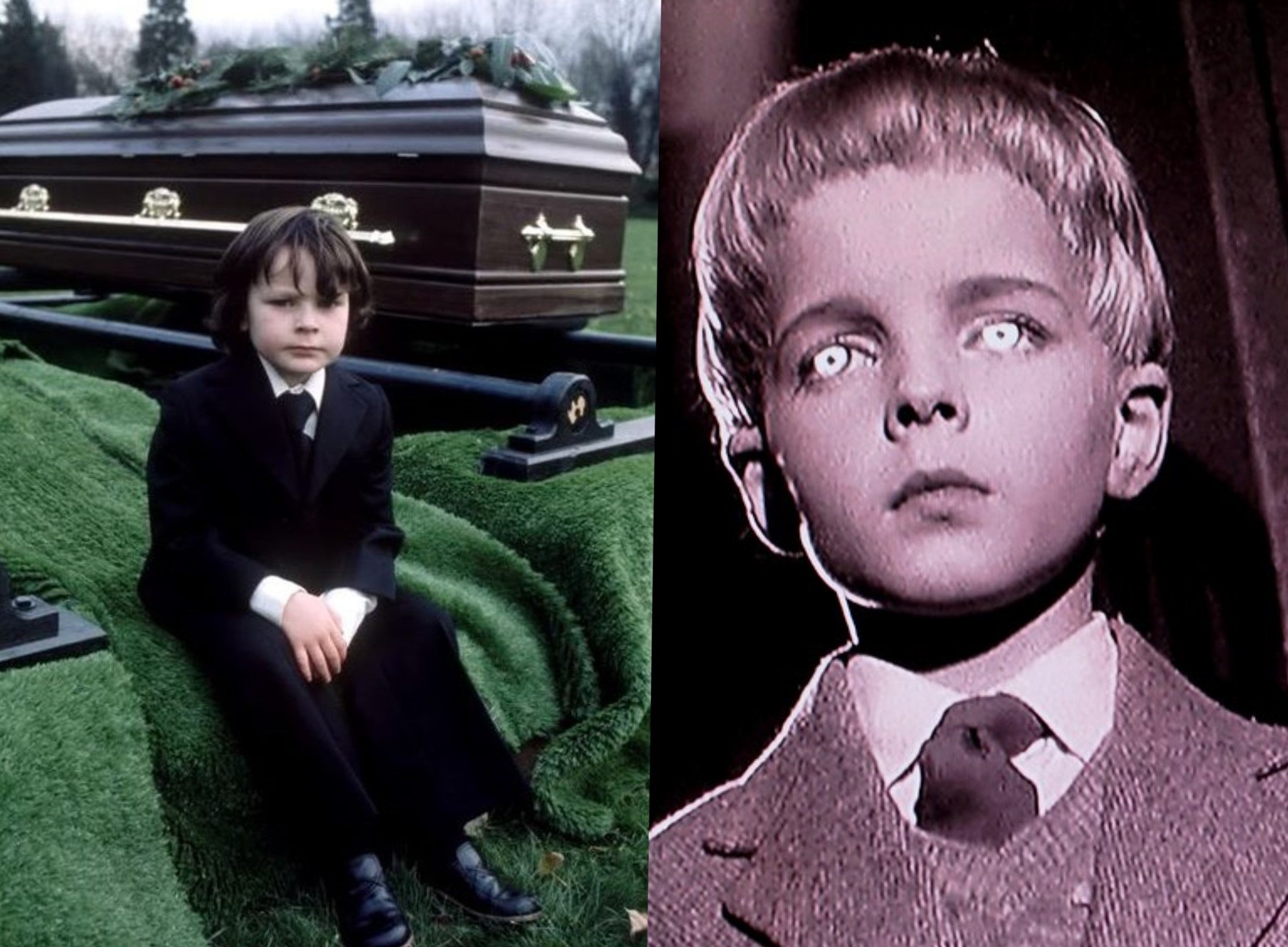 “A small, interesting town. Gatlin, to be exact.”

“What’s in Gatlin that’s so important?”

The man looks at the young boy with a warm, yet somehow twisted smile upon his face. “Not what, my boy. Whom.” His off-kilter smile revealing his jagged teeth.

“I know. He Who Walks Behind the Rows.”

“I don’t understand.” David looks at the man driving. The black fedora hides most of his face, except for one eye. One glaring eye that always seems to be looking at him, even when the man is looking at the road. “You said that…”

“I said a lot of things David. All of which was to get you here, to this very place. You’re important.”

“Because of the prophecy?”

“Is this prophecy even real?”

“As real as ‘He Who Walks Behind the Rows.”

“Stop speaking in riddles and answer me.”

“You not having the answer, David, does notmake it a riddle.”

The Man in Black pulls the car off the highway and onto a small road, lined with corn. As far as the eye can see, rows and rows of corn.

“Why does it live here?”

“Who said that it does?” Again, the man cracks a crooked grin, as he pulls over at the only store they’ve seen in miles. “Wait in the car. I’ll only be a moment.”

As he enters the store, the old door creeks like it hasn’t been oiled in ages then slams shut behind him. The inside is poorly lit, and musty. Light shines through the window, reflecting off the dust in the air. The tired, wood boards cry out as if they ache beneath his feet with each step.

A small, fire headed child is sitting on the stool behind the counter, paying little attention, while reading a comic that looked to be quite old.

“What happened to Isaac?”

The man’s unnaturally deep voice startles the kid, causing him to nearly fall sideways off the stool. The child looks up, his youthful eyes momentarily connecting with The Man in Black’s cold and empty stare. Realizing who just walked into the store, he jumps off the stool and runs full force for the door.

“STOP!” It wasn’t so much a yell, as it was a command. Like a still frame, the boy freezes in his tracks immediately. One foot remains in the air, a hand stretched out toward the door that he almost made it to. The man approaches slowly, admiring his work.

He cracks his neck first to the left, then to the right, as he reaches a hand out, slowly raising the child’s chin to meet his terrible gaze. A lonely tear cascades down his young, rosy cheek as he’s forced to stare into the abysmal eternity of infinite death.

“I believe I asked you a question, boy.”

“Isaac was a traitor. He lost your favor. You sent us another…” His sentence is interrupted by an invisible force that sends him flying through the door, knocking it off it’s old, worn hinges.

David watches from the car as the child lifts himself to his feet and brushes off, his bright red hair a mess.

“Then who sent him, if not you? Who could defeat Isaac without your blessing?”

The Man in Black grins slightly. “That’s what my small, pale, friend, and I are here to find out.” He opens the car door and gets in, starting the engine. “David, punish this impudent little shit, would ya’?”

David rolls down the car window about halfway and whispers something to the child. A moment later, an eighteen-wheeler’s horn blows as the kid steps out into the street. The sound of metal screeching and the smell of burning rubber overtake the senses as the truck jackknifes in the road, colliding head-on with the small boy, almost evaporating his soft, fragile, body entirely on impact. The sound is excruciating.

“Stick with me, David. You’re going to make a fine ruler.” He reaches his hand out, messing up David’s hair as the car drives off, leaving the wreckage behind.

“To them. To be fair, it’s only a small part of me. I’m so much more than that. To others, I’m known as something else. ‘The Man in Black’, Randall Flagg, The Walkin’ Dude, Walter O’dim, Walter Paddock. In the end, it makes no difference what they call me.”

“No. Not him.” The man suddenly seems displeased.

“Is he your master?”

“Ha! I only serve the Crimson King, boy. The Great Scuttling Spider!”

The car makes a sharp left turn, disappearing into the tall stalks of corn as if being swallowed until eventually coming upon a clearing. A group of kids is gathered together, torches stick out of the ground lighting the night as the sun begins to set in the background. The car slows and comes to a stop. As the man steps out, tipping his hat forward the children kneel in front of him.

“Children, I bring to you your new leader. David has gained my favor. Not this traitor who comes under false pretenses. Hear me now, I have sent no one before this day. Bring me the one who claims it to be so.”

As the Man in Black addresses his followers, the wind blows and the corn behind him parts. A small child walks into the clearing. A charming grin on his face, a mischievous twinkle in his eyes.

“What is your name boy?” The Man in Black walks forward, eager to finally get some answers.

He tries but is unable to break the gaze, and as he is forced to look into the very depths of Hell, it is he, Randall Flagg, the Walkin’ Dude, Walter Paddock, the Man in Black, who sheds a lonely tear. Gripped by the ice-cold hand of sheer terror.

As if to prove his point, Damien raises his hands, setting the corn ablaze on all sides around them, trapping them in a ring of fire.

“Go home, Randall. You had your chance and you failed.” The fire rises higher and higher the angrier Damien gets, shooting into the sky like pyrotechnics on an over-priced wrestling pay per view!

“I haven’t failed! Have you not seen the things that I’ve done? Not only in this timeline, but in others?”

“My father is coming, Randall. He will not be happy you betrayed him for your precious Spider King.”

“Where is he now? Your Crimson King?”

Burning corn husks shoot from the darkness like shotgun slugs, several of them landing in Randall’s chest, lodging deeply and setting fire to his clothes. The fabric catches eerily fast, igniting almost instantly, and then spreading even quicker. As the children stand up to defend him, David speaks.

The children turn, gazing upon Damien. His eyes glow red with more than the reflection of the fire surrounding them. As the Man in Black screams in anguish, his flesh smoking and cracking underneath the flames, they charge. Not in control of themselves, one by one their horrible fates befall them. From burning, impalement, to their skulls caving in from external pressure, every single one of them suffers an awful death at the mere whim of this small child. None of them coming within feet of him.

The screams stop, and Randall falls to the ground as Damien takes a step forward. The ring of fire contracts around them, as if following its master closer. The temperature rises several degrees as the flames continue to spread.

“Snap your neck,” replies David. His voice flat and calm. A bead of sweat trickles down his dirty forehead.

“That’s a neat trick.” Damien continues to walk forward as he speaks, bringing the fire closer and closer. “I’m afraid it won’t work on me, though.” Damien smiles, his small stature somehow seeming twenty feet tall. “But if you like tricks, I’ll do you one better.” The red in his eyes now a deep, unmistakable glow. The fire is almost close enough to touch.

Damien raises his hand, lifting the bodies (the ones still intact) of the dead children off the ground and back on to their feet. The look in their eyes is ravenous, their movement staggered as they hobble toward David. The wounds on their little bodies still fresh and dripping blood. They move quickly, yet to be slowed by the arctic clench of rigor mortis.

“Cool, huh?” asks Damien as the mob of reanimated ghouls sets upon David, grabbing at him greedily, his feet unable to move. The flames break apart, avoiding Damien entirely, and enveloping David while they pull and tear, ripping the flesh from David’s burning bones making him cry out for mercy.

His pleas fall upon deaf ears as the entire crowd catches fire, eventually collapsing on top of David’s small, mutilated body. Damien watches, the fire casting an ominous orange glow upon his face. He watches until the flames finally die down. He watches until the glow of the very last ember is extinguished until the pile is nothing but ashes. Until the dirt once again grows cold and the sun comes up above the burnt, black field of corn, he watches.

A cold, refreshing rain begins to fall upon his shoulders, putting out the last of the flames in the field as he rises to his feet, realizing what was in front of him the entire time. This was his world, and he will be king… 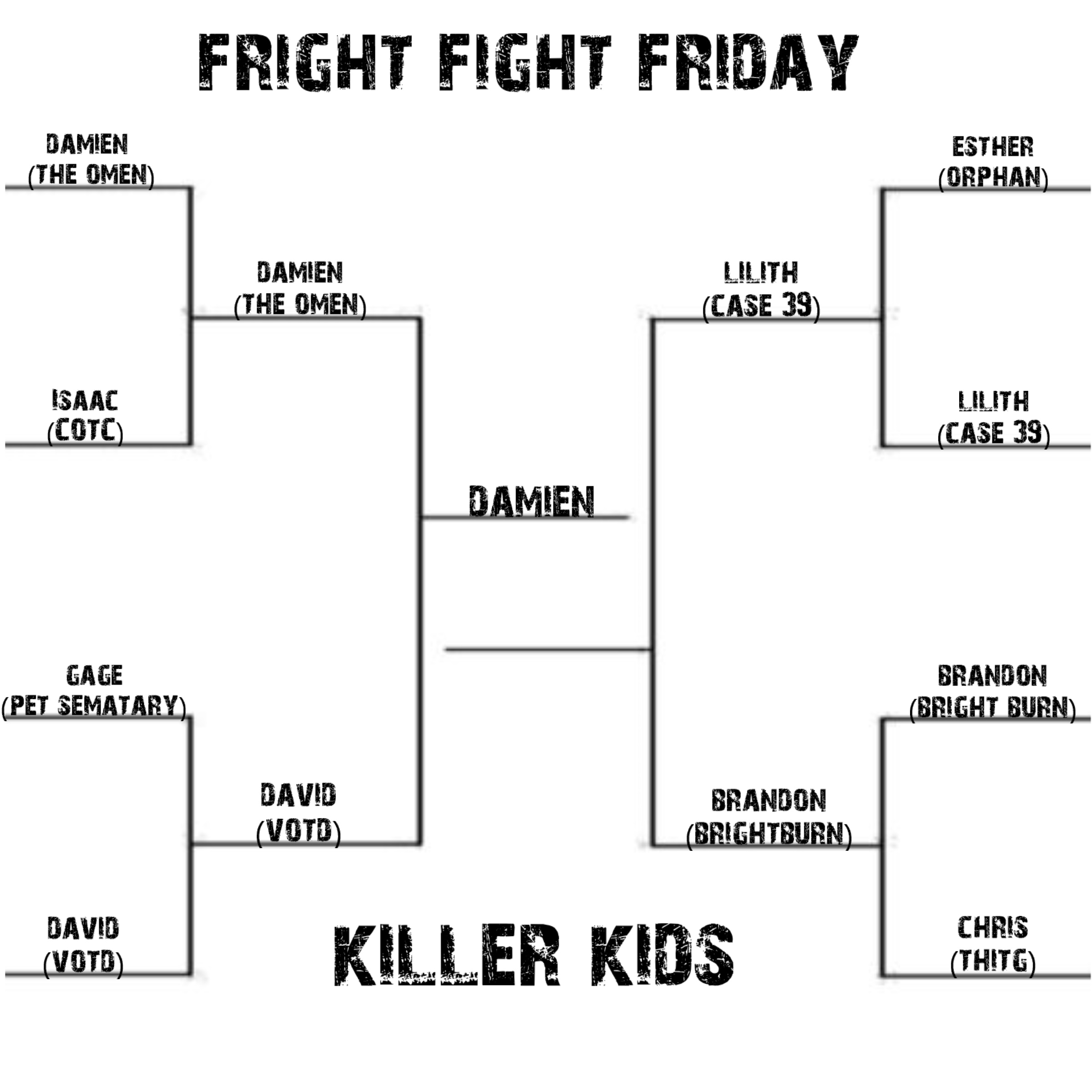 Now, when I do these fights I always try and give each fighter due credit and make sure they get in at least a few good licks before they go down. In this case, I decided to go the other way and have David’s ass handed to him by Damien.

I did this because - truth be told, David probably wouldn’t get a hand on Damien. I am by no means declaring Damien invincible, but if anyone’s going to take him down, it sure as hell isn’t going to be David. Sorry, little pale dude.

I thought it would be cool bringing the Man in Black back into the fold, explaining why he showed up in the first place. He knew he was going to need a new lamb. Adding that Randall Flagg, Stephen King’s main antagonist, was masquerading as “He Who Walks Behind the Rows” made sense not only contextually, but in the Stephen King universe as well. It’s been speculated before.

What do you guys think? Did David deserve more of a chance or do you agree with his brutal elimination? Yell at me in the comments below and make sure you check back next week for our Killer Kids Bracket Semi-Finals Round #2, LILITH (Case 39) VS BRANDON (Brightburn)! Place your bets now! All bets are final!