Welcome to the first round of the Fright Fight Friday Semi-Finals!

Today marks the first round of our FRIGHT FIGHT FRIDAY SEMI-FINALS and we have two tough and very hands-on combatants for you! Jason Vorhees and Chucky! Both our challengers defeated their first opponents to move to this round and we’re going to find out which one of them has what it takes to move on to the finals! There will be no teleporting, no magic chains or portals. This will be a closeup, in your face fight! Let’s get right into it!

Does this guy really need any further introduction? The son of Elias and Pamela Voorhees is one of, if not the most recognizable face, well mask, in horror. He bested Michael Myers in his last fight to get here and if Chucky plans on winning he better bring his A game because Jason is a problem. A virtual mac truck with two legs and a machete. I ran into him before the fight and asked him what his strategy for tonight would be. He just stared at me. Silently. It was weird. (OK, that didn’t happen, but it totally could have.)

A staple in horror since 1988, Chucky isn’t just a killer doll. He’s a killer man trapped inside of a doll. And he’s super pissed off about it. This makes Chucky extremely aggressive and quick to strike. He’s also like 2 feet tall so he’s tough to get a hold of. Add that to the fact that he’s pretty damn intelligent to boot. Many have underestimated the little guy. Most of them are dead. He defeated Leatherface in his last fight and when I spoke to Chucky earlier today, he told me that he plans on pulling an upset here tonight. Then he told me to “f@#k off”. (Also, didn’t happen. But admit it, you believed me.)

Chucky is constantly looking for another body to swap his soul into so he can get of out of the 2-foot prison cell he’s been stuck in for decades. Sick of chasing children and constantly failing, he comes up with a plan one day while watching the news. (Yes. Chucky watches the news, watch the first movie.) A report came on about some killings at a Camp named Crystal Lake. Supposedly some masked serial killer was back again and even though he had been shot, stabbed and seemingly killed several times, he kept coming back. Well, that sounded like just the type of body Chucky needed, so he packed up a few things in his “Good Guy” backpack and headed to Camp Crystal Lake. He arrived just as it was getting dark and the place had mostly quieted down. There were a few cops still hanging around but the campers had all gone home after the murder. Stuff like that tends to really mess a vacation up. Chucky watched through the trees as 2 cops standing outside of the taped off cabin joked with each other. “You would really think that these kids would stop coming here, huh?” “Well if they did, we’d be out of a job.” They both laughed as a large figure appeared from the shadows. “Carl?”, asked the larger of the two men. He raised his arm and pointed; his mouth agape. His feet frozen in place. Carl, the smaller of the two men, turned around just in time to see the cracked hockey mask. He didn’t even see the machete Jason plunged into his stomach. It happened too quick and before he knew it, he was hoisted up in the air. “Oh, shit”, said Chucky under his breath. “Just in time for the action.”  He took the butcher’s knife out of his backpack along with a rope. John, the larger of the two men, tried to run for his life. Jason cocked back his arm and threw his machete. It hit John hard, going through his chest and sticking into a nearby tree. Jason walks slowly to retrieve it, unaware that Chucky is slowly gaining ground on him. He closes the gap quickly before Jason can get to his machete. He runs in between Jason’s legs with rope and ties a tight knot before Jason knows what's happening. The killer doll steps back and in his toy voice says “Hi, I’m Chucky. Wanna play?” Jason cocks his head to the side, confused by what he is looking at. Chucky yells out in rage, this time in the voice of a grown man, as he charges Jason full speed. He jumps and hits Jason just hard enough to knock him off balance. With his legs tied together, Jason falls to the ground with a loud thud. “Awww, you ain't that tough are you, big boy?”, he taunts as picks up a large rock from the ground. “Time to go to sleep!” He brings the rock down on Jason with the strength of a grown man. Then again. He lifts his arm and brings the rock down one more time, figuring that should the trick. The rock lands with such force that it flies out of Chuckie's little hand and into the air. Jason’s arm shoots up and he grabs Chucky by the back of the shirt. He easily snaps the rope around his legs and stands up, holding Chucky out in front of him. Again, Jason cocks his head to the side, wondering what the hell this little thing was. Chucky sticks the butcher’s knife into his neck, “let go of me, you son of a bitch!”, he yells as Jason lets him fall to the ground. “Yeah, you like that?”, he asks as he scans the environment. Jason pulls the knife from the wound as if removing a mere splinter from his finger and looks directly at Chucky.  He marches in large strides toward Chucky, knife in hand. Still determined to get the ultimate new body Chucky barrel rolls at the last second, merely avoiding Jason's large boot. He jumps up and sinks his little teeth into Jason’s hand, causing him to drop the knife. Picking it up he uses his speed to his advantage and runs around Jason, escaping into one of the nearby cabins. Jason follows, kicking the door completely off the hinges. He looks to the left, to the right, no sign of Chucky. He turns to look down the hall when out of the kitchen cabinet behind him he flys. “Ahhhhh!”, a rusty, old hammer in his hand. Jason turns and with one hand, grabs Chucky in midair. He throws him down to the ground hard enough to cause him to bounce. Chucky rolls to his back to try and get up but Jason wraps his large, decaying hand around Chuckie's leg and lifts him straight off the ground. “I’ll kill you motherf@#ker!” exclaims Chucky as he flails his tiny body. “Put me down and fight!” Jason, sick of listening to a toy insult him, slams Chucky face first off of the ground. He immediately lifts him and slams him right back down, harder this time. Then once more, hard enough that one of Chuckie’s eyes pops out from the impact and is left hanging from his broken little face like a morbid Christmas tree ornament.  Jason takes another look at him, holding a foot out from his face, still unsure of what he was. His remaining eye opens and looks at Jason. “Wanna Play?”, asks Chucky. The words were slowed and chopped, almost like an engine sputtering out and then stalling. Jason, not wanting to play at all, rips Chucky in half with ease. Finally, quiet and still, Jason tosses the body aside.  The red and blue lights from the cop car reflect off his hockey mask as he disappears back into the shadows of the woods. 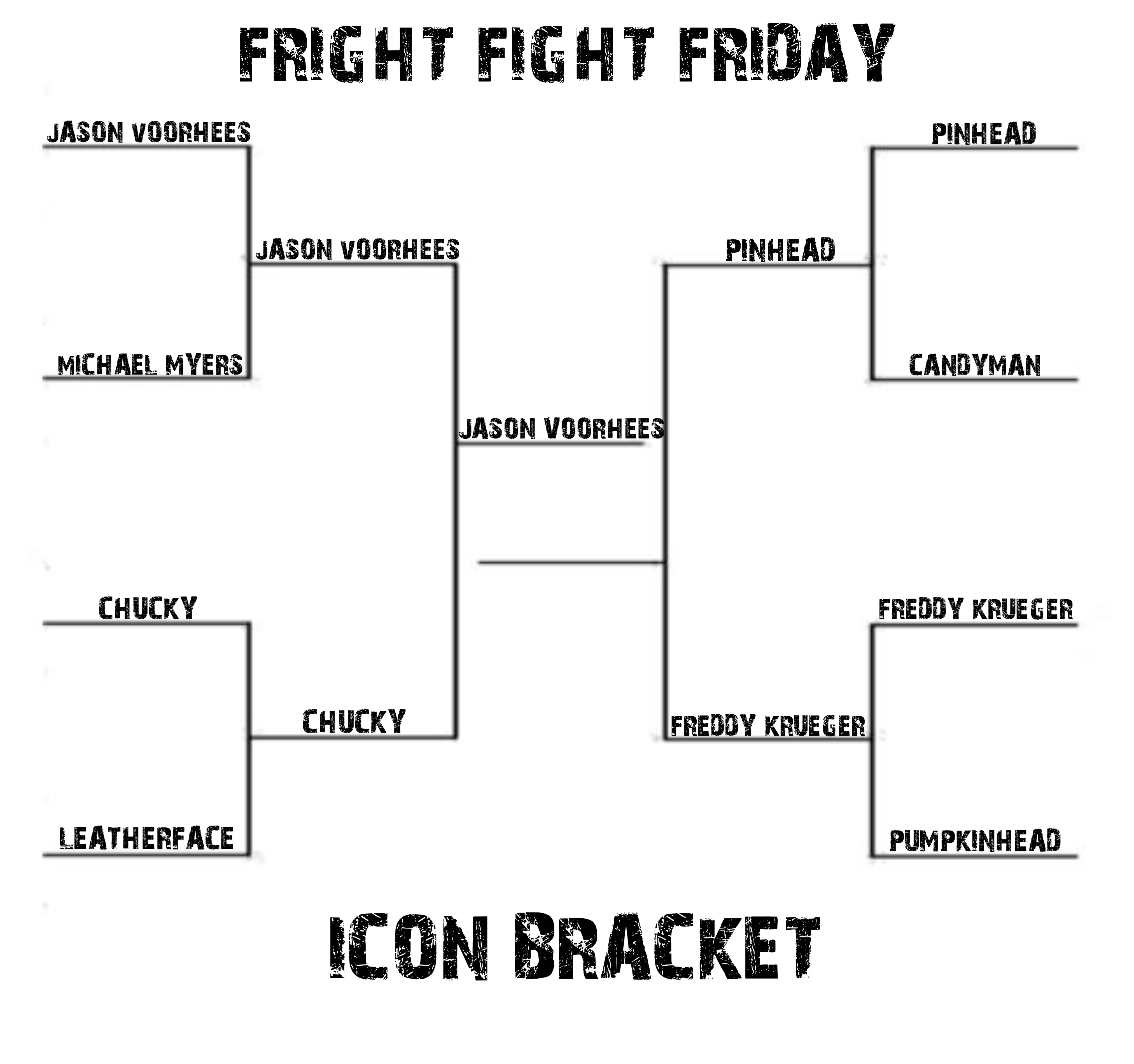 This one in my opinion, was just a matter of time. All Jason has to do is get his hands on Chucky. I’ll give the little guy credit, he’s got gumption, but I just don’t see him being able to do any real physical damage to Jason. Chucky could probably outmaneuver him for a while and maybe even set a few traps but eventually, Jason's going to catch him and utterly destroy him. Nothing in Chuckie's arsenal will be able to save him. Sorry, Chuck. This time you’re f@#$%*!

That’s it for now folks! Stay tuned, next Friday I will announce our next bracket and our next 8 fighters!

Then FRIGHT FIGHT FRIDAY will return the 2 weeks from today! Don't forget to upvote your favorite fighter and comment below! Until next time, keep on geekin' on my friends!