Welcome back to FRIGHT FIGHT FRIDAY where every Friday for the next several weeks we will be taking two of our favorite horror movie baddies to face off against each other! There will be 4 brackets, each with 8 fighters. The winner of each bracket will face each other in the finals for the right to fight the winner of our bonus hero bracket! For a full rundown please revert to our announcement!

This week we have two very powerful, bloodthirsty competitors for you! Clive Barker’s titans collide!

A victim of his own love Candyman, born Daniel Robitaille, was the son of a former slave who gained a massive amount of wealth. His only crime was falling in love with the daughter of a rich white man who he was commissioned to paint a portrait of. (Yes, Candyman can paint!) She became pregnant with his child and when the father found out, he hired a mob to chase him down, severing his hand and replacing it with a rusty hook and covering him in honey, watching as the bees stung him repeatedly to death.

His love, Caroline was forced to watch. After giving Daniel her mirror, he passes away leaving his soul behind forever in her mirror. He now stalks Cabrini Green projects in Chicago (or New Orleans depending on which movie we’re talking about because his background was retconned…) killing to keep the legend of his name alive. They say if you look into a mirror and repeat his name 5 times he will appear, then proceed to murder you brutally.

He enjoys painting, wearing large trench coats and bee farming. Did I mention brutal murder? Because he seems to be into that hard. His strengths are the fact that he’s practically immortal, he’s better with a hook than that Peter Pan villain, has superhuman strength and can teleport. Oh, he’s also full of bees.

Bees that he can control with his mind or will or whatever. Point is, dude has a ton of bees at his command.  Candyman has only 2 known weaknesses. If Caroline’s mirror is broken, his soul is released ending his reign of terror. His second weakness is that if no one remembers his name and if nobody talks about his legend he grows less and less powerful.  Candyman is an extremely powerful being and will be a tough match for almost any opponent.

Our next challenger tonight is a legend in his own right. First appearing in the novella by Clive Barker “The Hell-Bound Heart” Pinhead went on to star in “Hellraiser” and all its 745 sequels. Also known as “The Coldman”, “The Hell Priest” and “The Engineer”. The leader of the Cenobites, extradimensional creatures known as demons to some and as angels to others, who are summoned through the “Lament Configuration” puzzle box.

A veteran of World War 1, Elliot became bitter and disenchanted with life after the war. Seeking more, he delved into the occult and the esoteric until coming across the Lament Configuration puzzle box. Solving the puzzle opened the gateway to another dimension where Elliot Spencer was turned in to the being, we now know as Pinhead.  He now abducts others into the realm of “Hell” to harvest their souls. Pinhead is an incredibly powerful being and is even said to oversee hell in Lucifer’s absence. (Refer to the Scarlet Gospels by Clive Barker).

His weapons are hooks and chains which he can project and control with his thoughts, at will. His strengths are invincibility, Pinhead is practically immune to all forms of physical assault. He can teleport and in certain cases has even been able to bend reality to his will. He has superhuman level strength and is frighteningly intelligent and articulate. He can also create Cenobites out of his victims. However, he must be summoned by solving the puzzle box. He does not kill indiscriminately (except for in part 3 with that whole losing his human side thing.) He only kills those who beckon him forth with desire. Painfully and slowly.

He likes needlepoint, puzzles and shopping for clothes at Hot Topic. Oh, and torturous murder. That’s a big one for this guy.  His weaknesses are limited to trapping him back inside the Lament Configuration puzzle box or destroying it altogether. Also, if you can figure out how to revert him back to his human form he can be harmed, like in Hellraiser 2 – Hell Bound but that was done by a very powerful demon, so yeah. Good luck. And considering we're up to like Hellraiser 115, I’d say that didn’t work too well. To put it simply, Pinhead is one serious opponent.

Both of our challengers have a similarity in that they both need to be summoned to exist. For imagination's sake, let’s say that an antique collector (we’ll call him Jacque because that sounds like an antique collector’s name) came into a certain old hand mirror. Jacque was into the macabre so upon hearing it’s twisted back story involving Candyman, he had to have it. Same with the “Lament Configuration” puzzle box. Another gem in his collection. One day he was at home bored when he decided to take out Caroline’s mirror. He wasn’t going to say his name or anything. Until he did. “Candyman.” He said quietly, almost to himself. “Candyman, Candyman, Candyman.” He took a deep breath. It was just a stupid urban legend, right? “Candyman!” He blurted. Laughing the moment he said it. He put the mirror down placing it back in its box. “Stupid ghost stories.” He said to himself. Suddenly the lights flickered, he turned around and there he was. Standing in the middle of the room. “Shit!” He yelled. “Be my victim.” “What? No? Absolutely not.” Replied Jacque. “But I have such things to show you.” Said Candyman as bees crawled in and out of his mouth. He walked slowly toward Jacque, bloody hook in the air. In a panic, Jacque turned to the bookshelf, the same one he kept the mirror on and grabbed the first hard looking object he saw. The “Lament Configuration” box. He hurled it as hard as he could at the abomination in his living room. Candyman raises his good hand, catching it with a slight smile. “You insult me with toys?” He asks. There was clicking sound and suddenly the box opened, shifted and turned in his hand. A portal opened in his living room wall and inside of it, a shadowy figure in a long leather trench coat. The figure moved slowly and methodically forward, towards both of them “What the, what the hell?” Jacque asked aloud. “Yes.” Said the slender figure, stepping from the veiled portal revealing himself “Exactly.” He was horrendous to look at. Nails were driven into his head in a grotesque grid-like pattern. The fact that there was no blood dripping from these wounds was even more horrifying.  “What is this?” asked Candyman. “This.” Replies Pinhead “is your hell. Or maybe it’s your Heaven. Matters not to me.” A hook shoots out of Pinheads hand and into Candyman’s chest. He swings his arm downward and rips it out of his skin in one motion. Bee’s fly out of the wound. “The mortal is mine.” Says Candyman. As he strides forward swinging with his hooked hand. It almost connects but Pinhead teleports behind him and sends 2 more razor sharp chains towards Candyman. They hit hard tearing more flesh from his chest and his left cheek. “You think you cause me pain demon? Nothing can cause me more pain than what they did to me. To Caroline.” He disappears and reappears behind Pinhead, slashing him in the back with his rusty hook. “I am pain. And you will both be my victims.” Pinhead levitates into the air; a cold and calm laugh comes from the head Cenobite. “Oh, you have only begun to know pain. Chains shoot out from all directions attaching to Candyman and lifting him into the air. The walls start to catch fire and Pinhead lifts his arms, raising the flames. “You think you are the embodiment of pain?” A large chain wraps around Candyman’s neck, coiling like a snake.  “I am the Hell Priest. I am your suffering. I am your damnation.” Yells Pinhead as the house burns around them. Another one of Pinheads chains flies out, knocking over the box the mirror was in. It wraps around the mirror and brings it to Pinhead. “A Flimsy trinket.” He says. Candyman tries ripping out the chains but the more he removes the more come. Bee’s swarm Pinhead but he is immune to their stings. He raises his hand; closes his fist and they fall to the ground dead. Candyman struggles to get free but its no use. “The source of your power is it not?” Pinhead asks, holding up the mirror. “How quaint.”  He slowly returns to the floor. “You’re not getting off that easy. I will tear your soul apart, but I will make sure that it takes an eternity. Suddenly another chain shoots out form Pinheads hand, this time at Jacque. It sticks into the left side of his chest and he lets out a high pitch squeal. “Shit!” “What do you want?” He asks. “Oh Jacque, it is not I that wants for something my child.” “I don’t want anything. It wasn’t me! He opened the box…” “It is not hands that call us, but desire.” Replied Pinhead. A chain shoots from Pinheads hand, a hook as sharp as razors on the end of it. It slices Jacque’s cheek open as it wraps around his head. Slowly constricting. “And we have many sights to see and things to explore.” Jacque and Candyman are both carried towards the portal by the ghastly chains. Blood pooled on the floor as the walls crumbled from the fire. 3 other figures emerge from the portal to greet Candyman and Jacque. One was fat and grotesque, another a woman with a hole in her neck. The third was grotesquely disfigured and could only chatter its teeth. “Show them the true meaning of pain.” Says Pinhead laughing as they disappear back into the portal. “I’ll see you in Hell!” he laughs as the roof falls in around him and the flames shoot up into the night sky. As the last standing parts of the house fall in on themselves the Hell Priest, Pinhead walks into the portal and the Lament Configuration box reforms and closes. 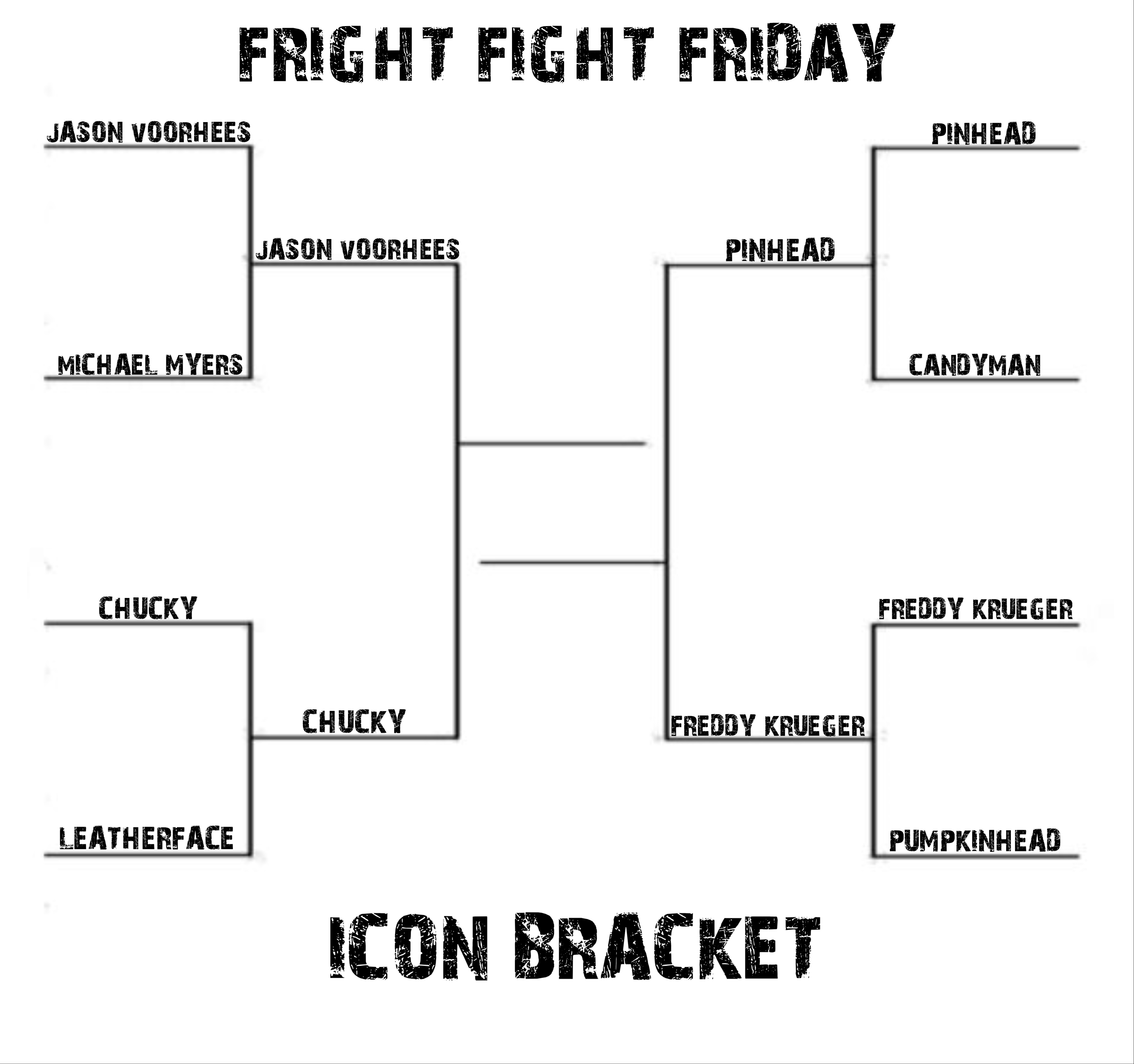 For me, this one was fun. Both challengers are very powerful but, in my opinion, Pinhead has a large upper hand. Not only is he practically invincible, but he's also a reaper of souls. Candyman is a soul who refused to leave this earth realm. In truth, Pinhead would probably be his boss.  This round goes to Pinhead. Quite easily in my opinion.

Well, there we have it. Round 4 is in the bag! Check back next week for Round 5! Jason VS Chucky! Remember to upvote your favorite fighter and comment below! Until next time, keep on geekin’ on my friends!