Freddy reviews the possession styled horror THE BODY WILL FOLLOW

“Your average ghosts wouldn’t be strong enough to take over a person, nor would they even have the means to. That’s not how ghosts work. But some ghosts can get so worn down, so mangled and fractured and scarred by time, that they almost devolve. These ghostly fragments sometimes find each other and merge together into something worse.”

In THE BODY WILL FOLLOW, we follow Carrie a fitness nut who’s lost her way. She went from daily runs to hourly sex romps. She doesn’t feel like herself anymore. That’s because she’s being run by “the Wishes,” a moniker she gave the cluster of lost ghosts that have tethered themselves to her impulses. The Wishes are simple, asking only to be fed and sexually satisfied, often. Carrie doesn’t have much choice in the matter and spends any time she is given to contemplate her escape.
She fails.

Soon after, she’s rescued. The ghosts extracted and her life returned to her.

Trying to piece your life together after you’ve lost your career, all your relationships and all while the cops are after you is a tall order. Luckily she finds a love interest. Daniel trusts Carrie right off, even though she gave him a rash of diseases in their encounter while she was under the Wishes spell.

Carrie learns that after you’ve been possessed like this you are left feeling sagging in your insides. The holes the ghosts ripped internally, an eternal reminder of their presence. She can also see auras now, so it’s not all bad.

Then she sees a man grappling with another cluster of ghosts. She decides to help free him from the Wishes and it doesn’t go well.

THE BODY WILL FOLLOW is written at a breakneck pace. Its 146 pages flew by. The style of writing reminded me of DIARY OF AN OXYGEN THIEF (Anonymous).

The title comes from a self-defense instructor Carrie visits early in the book. Basically stating that gaining control of the head and the body will follow, in a lesson on center of gravity. However, with the Wishes present there’s an entirely new meaning to that thought.

Rob creates great characters that all feel fleshed out. Even the ghosts that only Carrie can see. They don’t follow the typical ghost rules. Grass stabs through their feet, doors slam in their faces and rain will rip through them like bullets. The real world refuses to let them leave.

The only issue I can see with this one, is the content. It’s hard stuff. A woman essentially being raped over and over by men who aren’t aware she’s possessed. That Rob is able to deftly write around such subject matter or counter it with humor and sarcastic thoughts is truly impressive. This isn’t an easy story yet it reads like one.

If you like a good horror novel, this one is as distinctive as they come. It picks you up and tosses you around the walls a bit before settling in and opening up the curtains to what you’re actually seeing.

I absolutely enjoyed the hell out of this one. Not sure I see where a sequel is needed but Rob told me he’s working on one now. I’m trusting he knows better, at this point.

The tiny frozen pellets tear right through the ghost like machine gun fire. He falls to the ground, writhing in agony as needles of precipitation shoot through his ghost flesh. 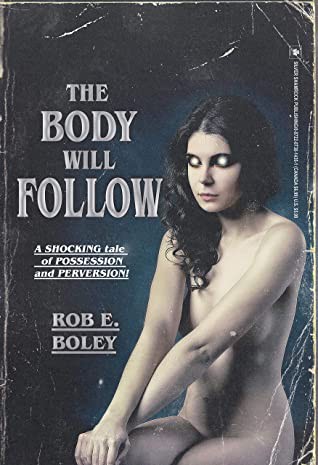