Anyone that reads my articles knows that I love weird film. The weirder the better.

When I heard a movie was titled SHITHEAD, I couldn’t’ resist. Who wouldn't want to see what happened to that lovable dog in THE JERK?

How can I not review that? Then i watched the trailer and here we are.

So what is SHITHEAD?

It’s a movie shot entirely in its own reality. The products are imagined, the commercials creative, the cops are all racist pigs, and there’s only one drug in town-Chenko.

Within this reality we follow father-of-the-year candidate Jordan Cantwell (Johnny Smith) a slacker with no job and a heavy addiction to Chenko. All he wants is his drug of choice and some peace and quiet. He lives with his girlfriend Janee Schlemson (Erica Everett) in his dads (Timothy Day Slisky) house.

While fighting with his baby mama Renee over having to babysit their son, who’s sick, he tries to convince her not to worry because “babies can’t get sick.” Renee quotes the “babyologist,” in her response. These scenes are made funnier by the creative way we view it from the baby's view.

Jordan starts his day smoking Chenko and standing on the corner with a sign for blood donations, dressed in the predictable Statue of liberty getup. He works his shift, gets stiffed on pay and finds fair payment in another donation box, by lifting it from the premises. When he gets home he tries to use the coins to buy some Chenko. The drug dealer arrives and makes it clear he wants full payment later. This keeps Jordan from smoking/snorting his drug. Instead he has to sell some of the bag of drugs in order to relax and enjoy it himself. His first sale is to a couple of local teenagers on bikes. They ride off with the bag of drugs and must have forgotten to pay.

When the drug dealer arrives later expecting payment, Jordan instead offers up his baby to get even. It all goes downhill from there.

Downhilll in ways that would make John Waters jealous. SHITHEAD dredges the bottom of the ocean and shouldn’t it? It is titled SHITHEAD.

SHITHEAD is first and foremost a comedy. There’s one gag after the other. Watching Jordan is like watching Divine back in the day. You are transfixed, a little offended, on the cusp of a laugh and can’t wait to see what happens next.

The rest of this movie is about as offensive as it gets and intentionally so. There’s jokes about gays and fat kids aplenty. Jokes regarding racism are mostly held to the cops, which works pretty well. There’s some slight gore but when it hits it will make your eyes widen. I still can’t believe what I saw on screen when a dick pic he sent on Dickstagram leads to a baby being born on his chest.

The director, Mike Morelli, actually created the first person shooter just for this movie. I was impressed. No the graphics aren’t going to knock out you. The effort should though. There’s a ridiculous amount of commercials made in this alter-reality. Each one filmed in this created world.

Here's the full infomercial we see playing in the background throughout the flick, because they can't change the channel on their tv.

Mike Morelli wrote and directed SHITHEAD which clocks in at 1h 38 min.

The music is insane and takes you out of a few scenes but largely plays to the hyperkinetic way the film is edited.

While I wouldn’t recommend this movie to everyone. The plot is literally Jordan trying to find drugs and trying to sell his baby to obtain them. If you like bizarre films far from the PC police, this one is probably right up your alley.

As Mike mentioned to me, he’s just a kid from Jersey that wanted to make a movie. The only difference between he and a million others out there just like him, is he went and made it happen.

SHITHEAD will drop on Amazon this week. Until then, you can get the info you need here.

Mike promised me a Chenko hat and maybe some other goodies to give away to our readers. Once I’ve figured out how I’ll break down the giveaway, I’ll run a contest. That should be up next week. 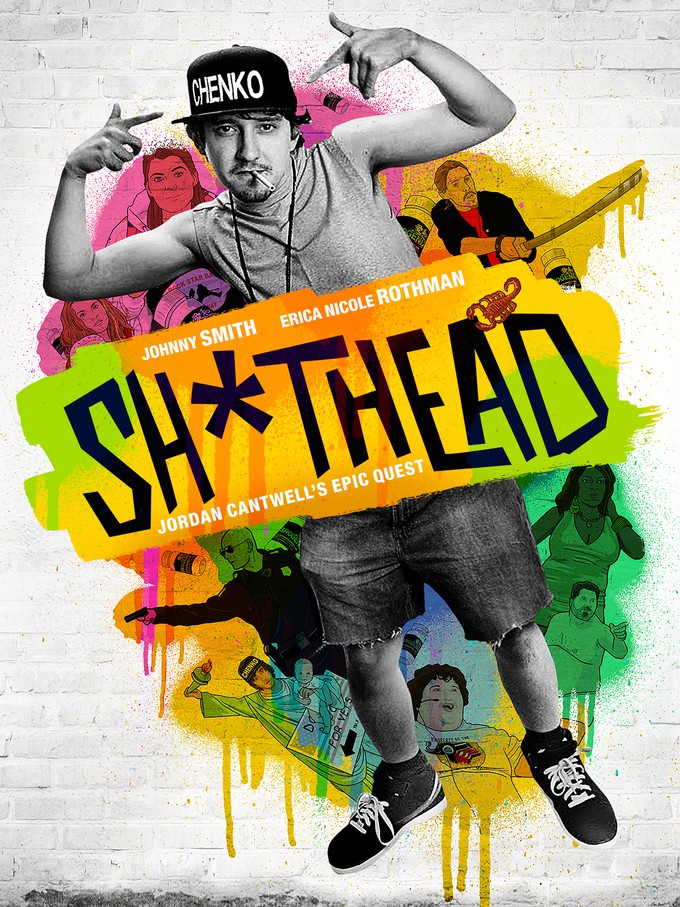