Ken with a review of the new Joe Ledger novel RAGE, by Jonathan Maberry.

"Ha-yuen, where are the children?"

His wife threw back her head and screamed.

With such hungry, hungry laughter.  And then she ran at him, hands reaching and those bloody teeth opening wide.

RAGE opens with Joe rescuing a kidnapped girl, in the way Joe does, brutally.  This isn’t his first rodeo.  If you’ve read any of the other 10 novels featuring Joe, you know he does what he’s asked-his way.

Leading Havoc Team, a smaller subshoot of Rogue Team international, Joe ends up in a complex plot of bio-weaponry.  A small North Korean island finds its people starving.  That’s not entirely surprising, the reasons however for their “rage” are.  The quiet people of this town become mindless zombies in seconds.  Tearing into one another, young and old alike. There's no rhyme or reason to their carnage, leaving the rescuers unsure and unsettled.

What starts as darkly woven tale of espionage becomes a horror novel.

Joe must lead his team to the island to assess what the hell is going on.  Their biohazard suits, all that separate them from the unknown rage.  Well, and a few guns.  Landing on the island under the guise of World Health Organization, Havoc Team is on edge from the beginning.  That’s how it is when you don’t’ know who to trust.

Are the American’s at fault?  The Chinese?  The Southern or Norther Koreans?  Someone else?  It all unfolds in a tightly wound package I rather enjoyed.

I’ve only read two other Joe Ledger books and found them slightly enjoyable.  This one felt different.  More at stake.  Maybe it’s the way Jonathan mixes old characters with new.  Giving a knowing reader sly nods for their efforts but making the book a stand-alone that doesn’t necessarily need that back knowledge.  It’s an expertly woven tapestry that I was absolutely absorbed with.

The bad guy is a bit clichéd.  He even kids with the other bad guy about how clichéd they are.  The novel would have done itself a service to simply remove that chunk of scene.  It reminded me of my initial thoughts on our predictable main baddie.  He only needs a pet cat and an eyepatch or glove to really reach the evil genius heights.

It’s too bad, because his main henchman is bad-ass.  He’s exactly what you want in a bad guy.  Ruthless, cunning and unstoppable.  He doesn’t need money.  He doesn’t have anyone you can use against him.  His motives are his own and it’s clear no one wants to stand in his way.  I hope he eradicates himself of the hierarchy and takes over the reins in the remaining two novels in this trilogy.

The story is really complex and expertly told.

The writing is a bit uneven at times.

The characters are full, even with the break-neck speed it’s written.

The last forty pages you’ll be unable to put the book down and the ending leaves you with mouth agape.  It’s a perfect entry into the continuing story.  Joe Ledger will be very motivated in the ensuing novels.

If you want a smart story, dripping in testosterone.  The type that leans smarts over brawn, until brawn is needed.  That and if you like kernels of horror in your espionage.  You should grab RAGE and thank me later.

RAGE is out now, find it here.

One moment they were still and the next instant they were in full, mad flight, tearing across the street toward the golf cart. Tony and Noah did not try to run.  Noah didn't start the cart.

No, because by then they were screaming, too. 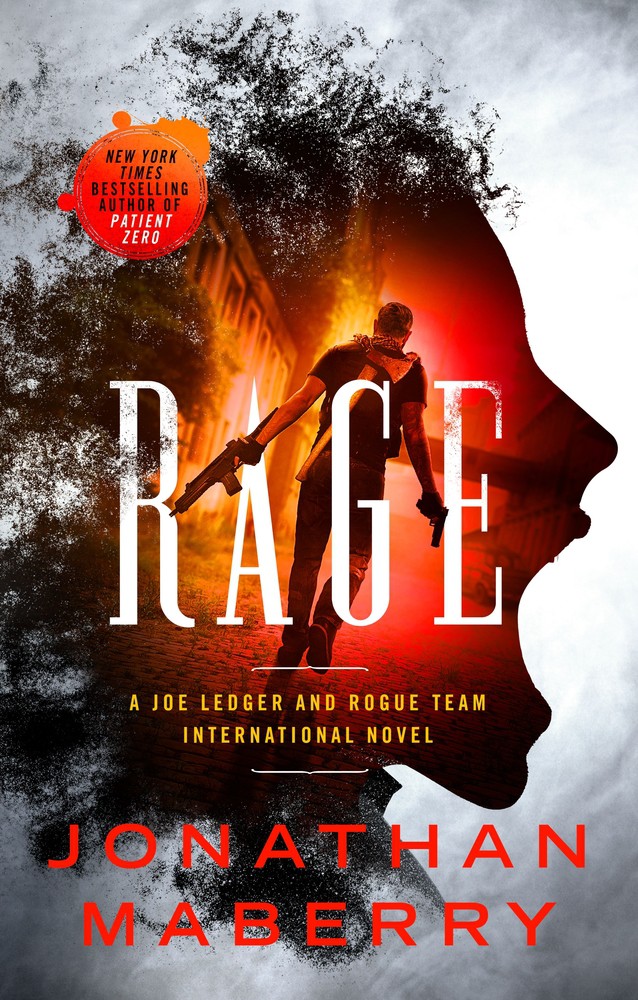