Ken, with a review of a horror flick set upon the ocean waves titled MARY.

David (Gary Oldman) is a glorified tour guide looking for a boat to call his own.  He finds her in Mary, a decrepit husk of barely floating junk offered at the local Florida auction.  He’s drawn to the naked siren plastered across Mary’s bow.  You can tell, because the camera keeps finding moments to pay attention to her boobs.  David wins her in the auction and shit just falls apart from there.

He gets home to his wife Sarah (Emily Mortimer) and she’s less than thrilled that their entire savings is spent on this boat.  She’s even angrier that they still owe money on this glorified log.  Being the dutiful wife that she is later revealed as not being, she helps David fix Mary up for their first voyage on her deck.
It works.  The ship looks amazing and they plan their first trip for the Bermuda Triangle, because…It’s a horror movie.

David brings his trusted friend Mike (Manuel Garcia-Rulfo) and Sarah bring their kids Mary (Chloe Perrin) and Lindsey (Stefanie Scott).  Lindsey gets her boyfriend Tommy (Owen Teague) to come and learn the ropes and they’re off upon the high seas.  One big happy family.

Everything starts off wonderfully.  Tommy loses his mind.  Lindsey gets lost in the dishonesty.  Mike gets possessed.  Sarah has utterly terrifying nightmares.  Mary starts incessantly drawing darkly with her crayons and talking about her imaginary friend Mary.  So David decides everything is Kosher and to keep sailing.

Gary Oldman doesn’t know how to mail in a performance.  He’s excellent as David a moron of a man, lost in his dreams at the expense of reality.  Emily does a great job with easily the worst character in this film.  Sarah is a pretty unsympathetic character and Emily made me forget that many times.  Bravo to her.  However, her unnecessary bookended scenes in this one drag the film down.  As much as I love seeing Jennifer Esposito (Detective Clarkson), I really tire of seeing her as the detective on a fresh case.  There has to be other acting gigs for her to whet her teeth on out there.  The problems here aren't actors though.

The cinematography is great.  I loved the unsettling music by The Newton Brothers.  Everything is all set for an eerie tale set upon the ocean’s surface.

Everything lives and dies by Anthony Jaswinski’s (THE SHALLOWS) screenplay and the writing absolutely kills this one.  Besides the extraneous bookended scenes to a decent horror flick I already mentioned, the lines in this one are like an anchor dragging the ships stern deep into the superfluous.

“Evil needs a body to exist.  The body was that boat.”   Is one of the many forgettable lines you will come across here.

If you don’t mind a flick that has a ton going for it but gets a little “lost at sea” then check MARY out.  It’s certainly not horrible.  It’s too bad honestly.  I love a ship at sea horror flick.  OPEN WATERS, THE BOAT, JAWS, and a guilty little pleasure called ORCA to name a few.  They're usually incapable of missing for my personal tastes.

MARY was directed by Michael Goi and is available now.  The movie runs 1h 24 min before it dries up.

6 out of 10 sailors think Popeye can do better than Olive Oyl. 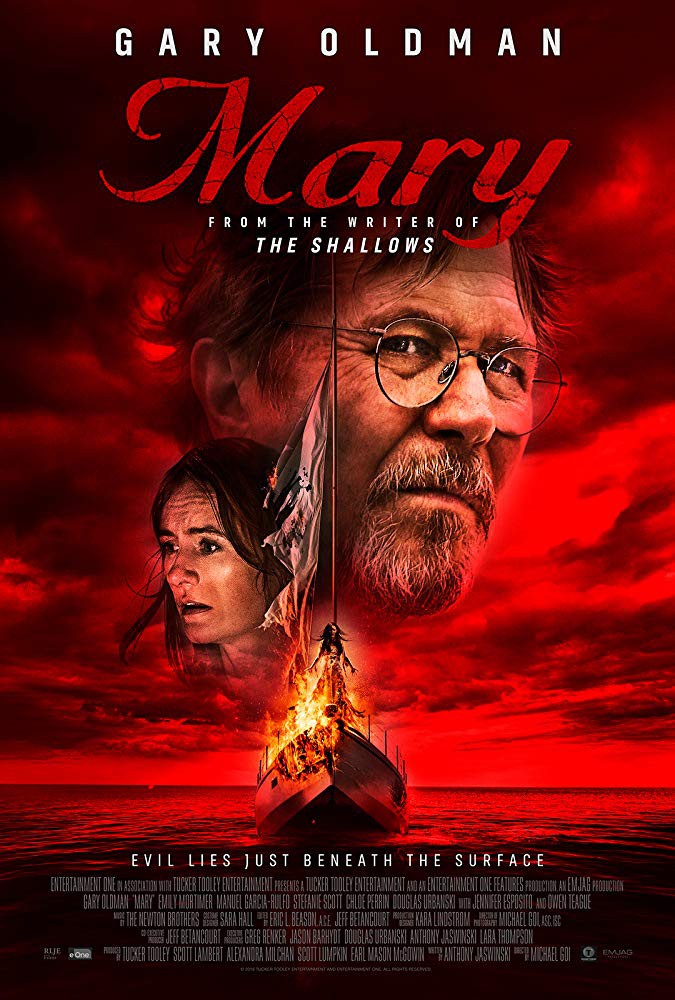