Freddy-With a review of an entertaining homage to the 90’s horror movie era titled TRIGGERED.

I am not sure when it’s appropriate to say so but I will stop writing for the site by the end of the year. No special reason, except I haven’t enough time to do this and write short stories/wannabe novels and screenplays. I want to use my time there moving forward. I'll miss the jerks and those that reach out to me in e-mails. Hopefully the site will grow again. I’ll write something more on my last article at the end of the year, so enough about that shit!

TRIGGERED isn't a documentary on Roy Rogers' horse, instead it starts in a murkily lit forest. It’s two old friends hanging around the base of an old tree. One has a knife, the other is tied up with an explosive vest locked on his chest. They’re not going to stay friends.

Next we meet a bunch of teenagers reminiscing about the good old days. They’re all onto college but nine of them had the free time to meet at the old hangout. (Sure!) They’re typical characters, one nerdy, one jerky, a stoner, a jock, etc. etc. The campfire burns on and one of the girls sneaks off to visit the leaky leaky room. AKA: The forest floor. She is about to do her business when she’s whacked in the head and wakes later, groggy and with a neat explosive vest attached now. She meets the other friends and all of them seem drugged and are also wearing the new fad. There’s also one of them still missing.

They can’t remove the vests. It's locked on tight and will trip if they tug too hard. They can’t figure any of this out but luckily a guy emerges from the shadows and explains what’s going on. He’s their old teacher and this is his final test. They all share a dark secret and he intends for them to pay for it. He initiates timers on all of their vests and lets them know only one of them will make it to the end and then blows his brains out the back of his skull.

They find the missing friend and his timer is beeping red and he ends up meeting his end like that watermelon head in SCANNERS. Time is added to the person that killed him. And the game is afoot.

I had a great time with this one. It really reminds me of the 90’s arcades with its lighting and vest readouts. It also reminded me of the 90’s because it’s loaded with great f/x gore. It’s not Slip n Slide spewing like in a HATCHET but its brutal cruel and awful bloody, all the same.

This isn’t a dread building flick. It’s a harkening love letter to the 90’s horror films. The mystery is easy to solve, with general twists. Some of which I did and some of which I didn’t coming. The story isn’t really that important. This movie is about killing each of its actors in entertaining fashion and with nine to remove, it’s a good time. If you’re into that sort of thing.

The actors are all extremely good looking and surprised me with their ability to handle the harder scenes. I would say they were having fun but it looks cold, dark and wet and the set never leaves the forest setting it begins in. 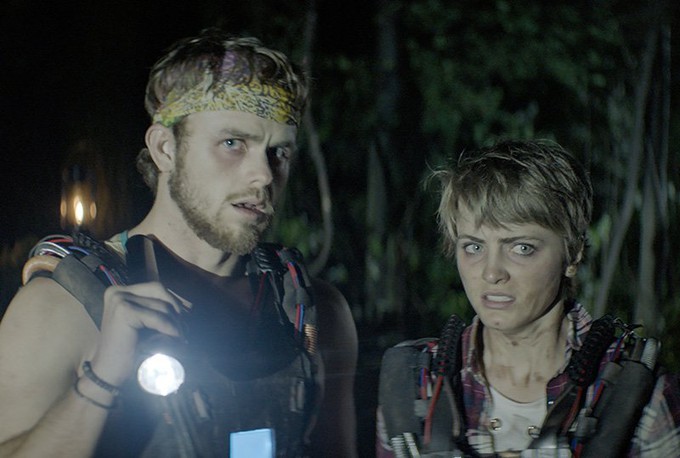 Alastair Orr delivers a really entertaining homage to my childhood off of David D. Jones lively script. There’s all kinds of subtle references to horror films found within. I also thought the dialogue felt loose and carefree, which benefitted the audience believing this group is all friends. Even though it’s clear, they’re not really friends at all.

Hard to stay friends with someone you can kill for more time on this earth.
Don’t hate the player hate the game!

If you like your horror psychological and prefer a slow pace, you will not enjoy this one. It’s unabashed in its joy of another time.

If you liked any horror film in the early 90’s that spent it’s budgets creating great kills and not using any CGI. This is definitely one to check out. Though to be fair i think an explosion or two was enhanced and i'm sure there were other subtle CGI shots but largely, this does without.

Blending the first 10 minutes of THE RUNNING MAN, with SAW, SCREAM, and BATTLE ROYALE to create an enjoyable horror film that makes this guy really appreciate the growth Alastair keeps showing us each time out.

TRIGGERED is out today (Nov 6th) On Demand and Digital. 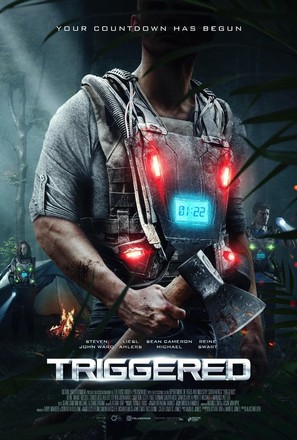