FLINT: THE POISONING OF AN AMERICAN CITY, trailer, exclusive clip and review

Ken, with a review of a must see documentary titled FLINT: THE POISONING OF AN AMERICAN CITY.

I’m serious, this should be mandatory viewing for anyone that gives a damn about clean water to drink.

Flint, Michigan exploded into the automotive industry post World War II via companies like Buick and General Motors (GM).  With industry alive there was an economic boom and with that good, came negatives.

That’s largely what this documentary explores.  The history of industry and the Flint River.  How the lumberyards for stagecoach production led to the automotive industry boom.  How throughout, their local water supply running in the Flint River, was being contaminated through some manner or another.  Sometimes industry was the issue, sometimes it was corrupt politicians.  The latter, being what led to the biggest mistake of all.

Stopping the water supply from Detroit, to siphon off the poison running in the Flint River.  That concoction, mixed with lead pipes created leaks and seepage that put corrosion and lead in their drinking water.

We learn in this documentary that lead exposure, while never good for human consumption, is exceptionally deadly to children.  And no small number of children were affected by this crisis.  Somewhere between 6,000 and 12,000 children were exposed to this undrinkable water.  There was a massive outbreak of Legionnaires’ disease during this time, among all sorts of other health issues.

The movie’s strength comes in its firsthand accounts.  This is a movie largely told by the residents.  The working class.

That's who we meet in AICN's exclusive clip:

We follow their daily routines.  Paying attention to their health, weekly bottled water pickups, and hearing how alone they feel.  How disrespected as human beings this feels to them.

This all started in 2014, that’s 5 years since some areas have had access to clean drinking water.  This coupled with some of the highest water bills in the land is devastating to the psyche.  Imagine that.  Paying a ridiculously high monthly bill, for the water in your pipes that you can’t use.  The water is literally poison.

An honest and unflinching look, David Barnhart (Director), along with Scott L. Lansing (Editor) create a documentary everyone in this country should see.

I thought I understood the water crisis in Flint, until I watched this excellent flick.  It’s opened my eyes.  Not that I ever doubted our government was in it for themselves.  It’s just shocking the levels they’ll lower themselves to.  Always for that NEVERENDING STORY, of greed.

The fact that over 100,000 people have been poisoned by lead in Flint.

Or a USA Today article about how over 2,000 current public water systems across all 50 states don’t pass EPA national standards, currently!!

While it’s not in the documentary, this coupled with our current president’s recent cutbacks of Federal Protections for streams and wetlands, is infuriating.

Everything else, is interspersed throughout the engrossing film in a largely nonjudgmental way.  It has the best explained effects of lead poisoning, I’ve seen.  How the neurotoxin causes permanent brain damage.  Or literally seeks out the body’s crevices of calcium and replaces it with something less conductive.

Like the guy in the trailer's hoodie says, FLINT LIVES MATTER.  Or they should.  To all of us.

The question FLINT: THE POISONING OF AN AMERICAN CITY poses is a simple and effective one.  How can this happen in any American city?

And the truth is, there’s not an easy answer here, because throughout America, right now, there’s water that doesn’t’ meet EPA standards.  Over 2,000 cities folks!  We should all be outraged.  I thought this was an economic boom?  Can we take a smidgen of that and replace our aging industry, pipes and all?  Please?

FLINT: THE POINSONING OF AN AMERICAN CITY is available now in Digital via Upstream Flix. 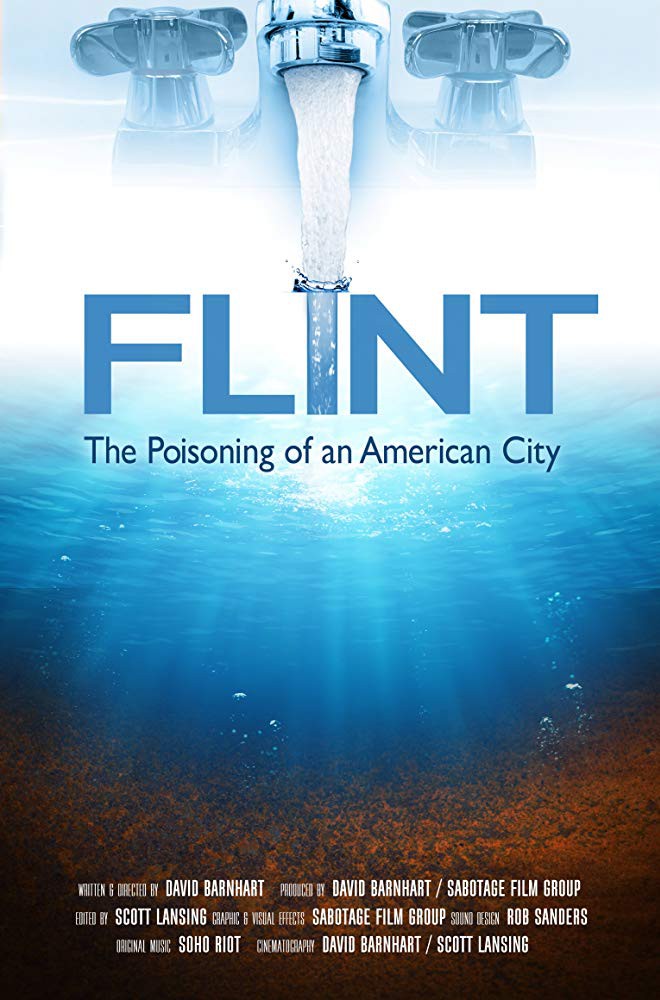