Freddy-With a review of BILL & TED FACE THE MUSIC.

To start this review, I wanted to point to the history of Bill and Ted.

I don’t think some of our younger readers understand how deeply entrenched this duo is in pop culture. Without them, you don’t have BEAVIS & BUTTHEAD or WAYNE’S WORLD. I’m sure some of you feel the world would be a better place without those two but there’s no denying they derive from Bill & Ted. They pushed the boundaries of decorum during a time of rigid stodginess. Reagan to Bush Sr. seriousness led to Bill & Ted silliness.

That’s my theory and I’m sticking to it.

By the way, I know this guy steals a lot more from Jeff Spicoli than Bill and Ted, but does anyone else hear Bill & Ted when he speaks?

In 1989  BILL & TED’S EXCELLENT ADVENTURE came out. Introducing its audience to San Dimas High, a time travelling comedic genius, and our two favorite lunkheads. They have to work hard to pass their history class knowing the future of the planet depends on their entrance into the Battle of the Bands.

Spoiler alert: They win. The end.

Spoiler alert: They beat Death, the killer robots and all the evil plans.

Enter SPOILER ALERT territory at your own risk:

Ted “Theodore” Logan (Keanu Reeves) and Bill S. Preston Esq (Alex Winter) are now, slightly wrinkled middle aged men. We open on the duo at a wedding gig of Missy’s. When we last saw her she’d left Bill’s dad to marry Ted’s dad. Currently she’s marrying another family member. In Bill-and-ted-land though, everything is Kosher and there’s no need for the typical wedding fight. Besides everyone leaves once they hear Bill and Ted’s newest song. 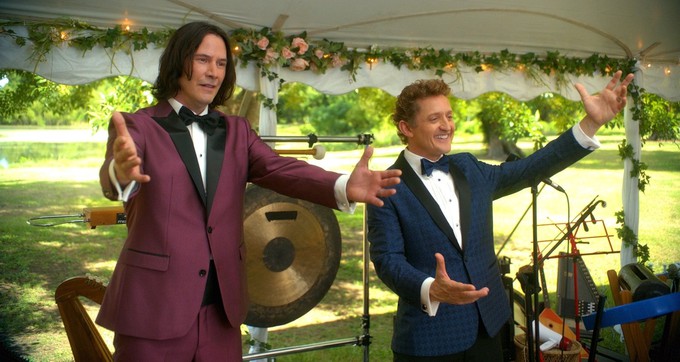 Not only does their music suck, their bro-kinship isn’t appreciated any longer by the princesses either. The girls are mulling a breakup. They even get the boys into marriage counseling. Except it sounds more like breaking up with them via an intermediary. The boys break away without any hard decisions being made and the weight of their reality weighing heavily upon their clueless shoulders. All they want is to write the song that unites the world.

Their daughters are behind them. Ted’s girl Thea (Samara Weaving) and Bill’s girl Billie (Brigette Lundy-Paine) are the same fun loving mendicants their dads are. Musically inclined and socially challenged, they riff off one another creating their own line of catchphrases.

Even with their daughter’s love its clear Bill & Ted are losers. 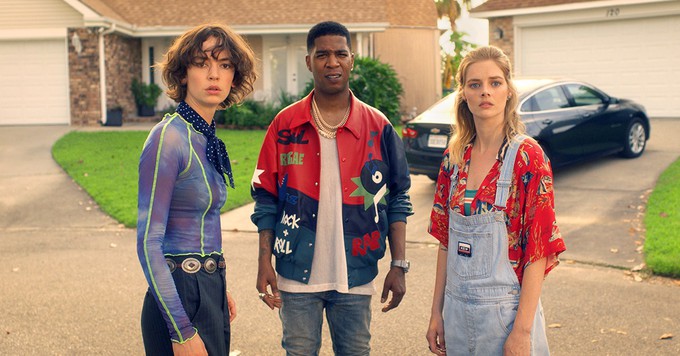 Then a telephone booth comes crashing out of the sky and pretty quickly we see how this flick deals with Rufus (George Carlin). It’s humorous, cute and made me smile. I think they used it perfectly and honored a hero of mine. Then graciously moved on to his daughter Kelly (Kristen Schall), because it’s 2020 and the girls/women are running things now!

Kelly isn’t coming with good tidings. It’s all bad news. The boys failed and the future is fading. The future needs that future saving song asap!

What are they to do?
Jumping into a timespanning telephone booth has done them well so far, so they’re off again. This time they’re after their future selves. One of these future Bill & Ted's has to have the song they desperately need to produce in 45 minutes, right?!?!

A robot named Dennis Caleb McCoy (Anthony Kerrigan) is deployed to kill our guys but it’s the future and even robots have conflicting emotions that need to be dealt with.

In the end, our heroes die and go straight to hell. Their ex-bassist awaits them. Death isn’t happy he’s been kicked out of the band. 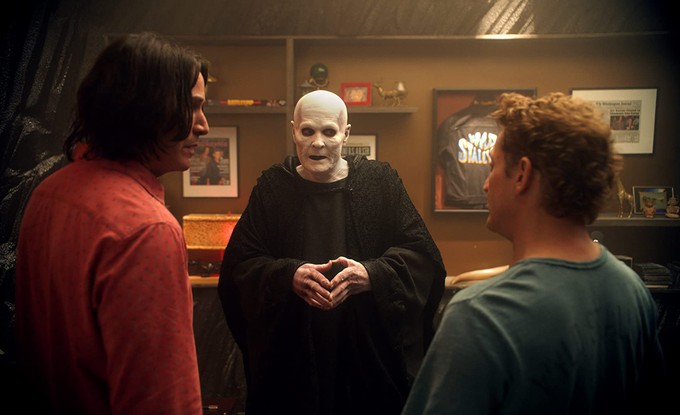 But that’s when Bill & Ted do what they do best. They unite. Or that’s all they’re trying to do.

While I don’t think it’s a big secret it will all end well; I think it wraps up satisfactorily, if a tinge formulaic.

Along the way we meet Babe Ruth (Not Baby Ruth!), George Washington, Jimi Hendrix, Louis Armstrong, Mozart and even Kid Cudi for some reason.

The highlights of this stroll down memory lane are the different future versions of Bill & Ted.

There’s the loser jerks who can’t even get a bar gig. They’ve lost the girls, respect and are even trying to scam their future selves.

Old and dying Bill & Ted are resigned to their fates but still have a few tricks up their sleeves. While it was funny to hear them croak out their dialogue it was also touching in parts, unexpectedly.

Prison yard Bill & Ted were the best though. These dudes are jacked like they’re here to pump you up but, like all Bill & Ted characters, they’re full of heart too. 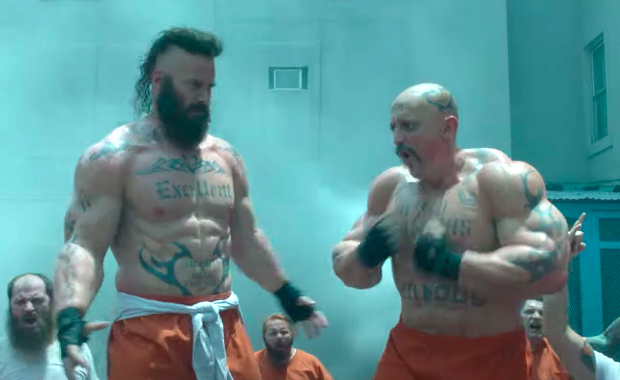 I think it’s important to point out that Alex Winter kills his scenes and was the surprising lead. His energy is infectious and keeps everything moving. Keanu has his moments of course. It’s just that he seems to let Alex be the beacon of energy and he’s up to the task.

Dean Parisot, who directed the best STAR TREK ever, titled GALAXY QUEST, directs here and does a damn good job. Taking a 29 year old story, dormant characters, a leads death and infusing them into a future world not meant for them, isn’t easy. I think he introduces these characters and a few new ones to a fresh audience while satisfying those of us that were fans of the originals.

Chris Mattheson and Ed Solomon teamed up to write the script that makes it all work.

I had a pretty damn fun time revisiting these two. They entertained the entire 1h 28 min film length.

If you have ever enjoyed these lovable dudes, I think you’re going to love this film.

If you’re new to them and like silly innocent fun, then I think you should give them a try.

Whether you’re a big Bill & Ted fan or a little one, who can argue with their central message?
BE EXCELLENT TO EACH OTHER! 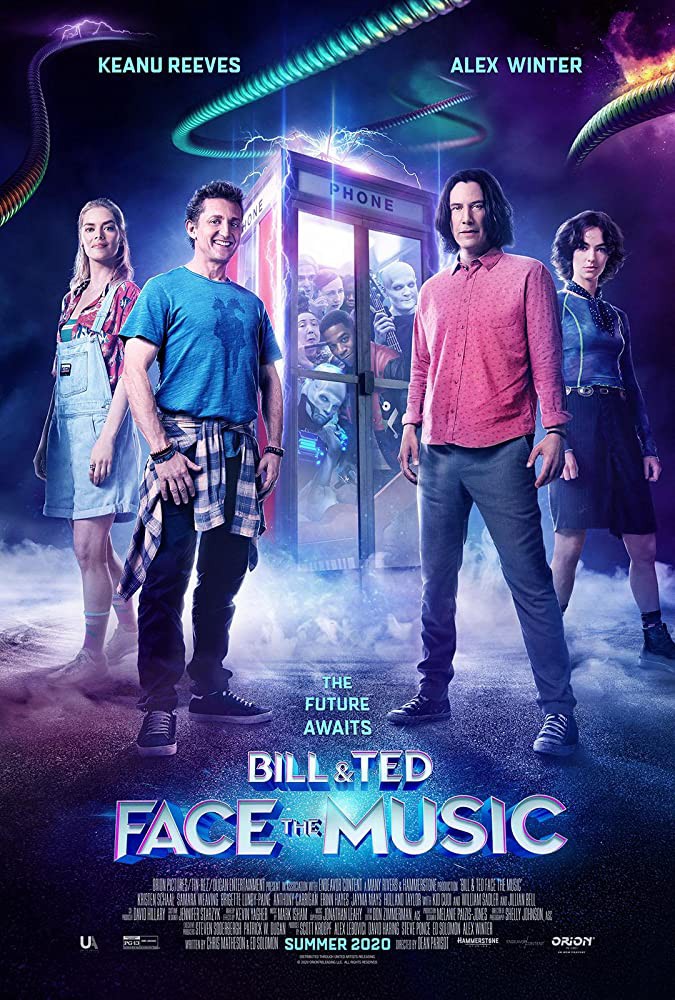 Until the next one