Freddy plays where THE DARK AND THE WICKED do, and lives to tell the tale

Freddy with a review of an unrelenting psychological horror film titled THE DARK AND THE WICKED.

THE DARK AND THE WICKED spans one week on an old Thurber, Texas farm. It’s rundown and looks deserted. It’s not. The patriarch, David Straker (mchael Zagst) has been holding on for years, with the help of life support and a part time nurse (lynn Andrews).

That leaves everything up to the matriarch Virginia (Julie Oliver-Touchstone) around this clearly dying farm. She seems to be handling everything fine until her damn kids show up.

Louise (Marin Ireland) and Michael (Michael Abbott Jr.) come to pay their last respects to pop, against their mothers wishes. There’s love here, it’s just old and falling apart like dad. Their family is frail like the farm itself. This is a family that has grown apart and is trying to connect, too late. For something else has moved in too and it makes its presence felt immediately and never quits.

It all goes to hell in a hand basket when mom tells the kids, “You shouldn’t have come.” She leaves the kids and later starts cutting the veggies for dinner that night. A chair moves without anyone in it. Virginia doesn’t seem to notice though, she’s too busy cutting off the fingers of her left hand and then dicing those bits into smaller portions. She ends up hanging herself in the barn that night.

She leaves behind a bag full of crucifixes, a dying husband and a diary that seems written with the backing of paranoid delusion.

Even with her buried she speaks to Louise in the empty house and later starts calling her on the phone. She’s even more confusing to Michael. Appearing in lurid fashion while smiling devilishly and reminding him that he shouldn’t have come. Hey, mama knows best.

The local pastor (Xander Berkeley) doesn’t agree with that sentiment and explains very politely, why the family will slowly rot in hell for rejecting the Christian teachings. 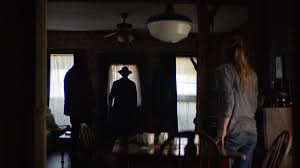 From there, this one gets cooking and never really lets up. It feels like a slow burner but there’s an onslaught of psychological terror thrown at us.

Bryan Bertino (THE STRANGERS/MOCKINGBIRD) wrote and directed this one with a sure hand. He doesn’t let you know what exactly is going on, while showing you everything. The audience isn’t sure if the family is losing it as a collective unit or if something more ominous is at play.

Paired with Tom Schraider’s unsettling score which perfectly punctuates each unnerving scene, the audience is left spooked like those sheep in the barn. Unsure, on edge and waiting for something bad to happen.

The star of this film is easily Marin Ireland (HELL OR HIGH WATER). She is trying to fix a broken family while being broken herself. We feel her pain as she is relentlessly accosted by visual phenomena. Her moves feel real and tangible while everything around her seems to be falling into unexplainable chaos. 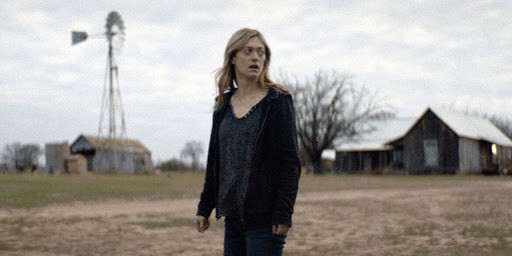 THE DARK AND THE WICKED is an uncomfortable view into a lost family stuck with delusions that become all too horrifically real.

I loved this film. It’s one of the scariest flicks I’ve seen in 2020. The desolation and lack of community falls right into the pandemic filled fall that awaits us.

While I liked Bryan’s THEM (2006) remake THE STRANGERS (2008), I preferred the original. He’s better when left to his own devices.

THE DARK AND THE WICKED is an original and it will leave you seeking the warmth of another when the credits roll.

THE DARK AND THE WICKED is in theaters, On Demand and Digital November 6th. 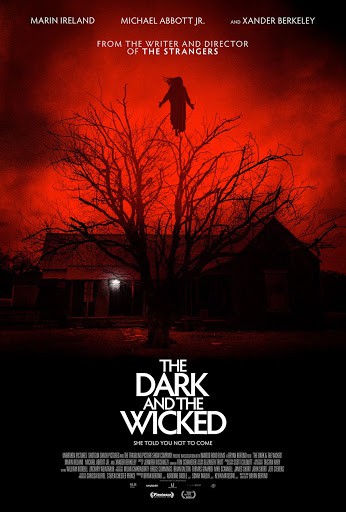