Freddy-With an interview of Nick Stahl for his role in the dark and gloomy thriller titled HUNTER HUNTER.

HUNTER HUNTER follows a family of fur trappers living off of the grid. Joseph,his wife and daughter live in a squat little cabin with proper outhouse. Wife spends the day doing laundry, selling furs, and figuring out how to fix up their next meal. Dad spends his, locating his traps, collecting their bounties and fending off his daughter’s desire to be more involved.

Then a wolf appears. He’s eating the poor critters they catch and that’s no way to go on. Dad decides to do something about it and takes to hunting the canine. Finding its path through broken branches and captured scents. Then he finds it. In a camp. With a detached human hand in his teeth. There’s a camp of at least four dead campers. The wolf didn’t do it though, unless he learned how to tie knots with rope.

Mom is having a hard time of it back at home. She’s panicking and not sure when Joseph will be back. She goes looking and runs into Lou (Nick Stahl). He’s injured and bleeding and she takes him in. Is he a wolf in sheep’s clothing?

Or is he her only chance of survival?

And now, a chat with Nick Stahl. 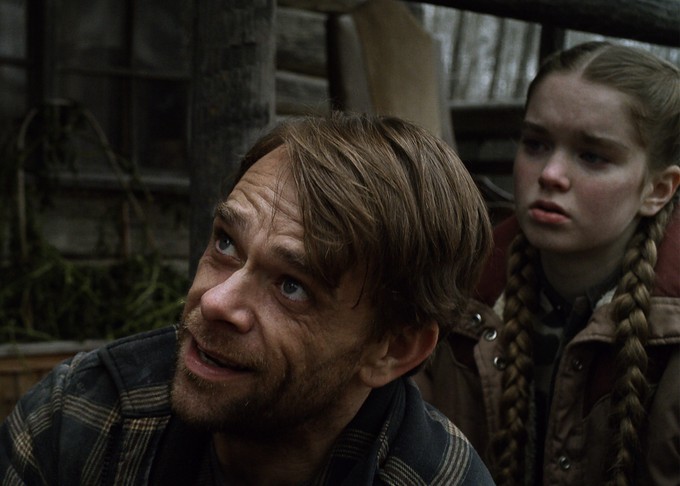 Freddy Beans: How are you doing and where are you today, Nick?
Nick Stahl: I’m doing well, thank you. Los Angeles.

FB: How’s the weather there? Is it as blue down there as it is up north?

FB: I hear you there. It’s a beautiful blue day here in Sacramento but a bit chilly.

NS: It was a cool challenge with the dual nature of the character. Attempting to be this dark stranger masquerading as something else. Then transforming into a, scarier guy. Finding that morph and figuring out what it looked like. It was a great script by Shawn Linden. I didn’t have to do too much with it because it was really clear what was needed on the page.

FB: Without ruining anything, was that you under that F/X work at the end?

NS: Depends on what shot it was. It was me largely and then there’s a double for a little bit. I did a lot of it. There was a lot of makeup time needed. (Laughs)
FB: (Laughs) Absolutely!

Your big screen debut was in THE MAN WITHOUT A FACE opposite Mel Gibson. I was wondering if you could take me through that experience at that age and your lasting impressions of the film and Mel Gibson today?

NS: Yep. That was my first feature. It was an awesome experience. I was cast in a runaround way. I got it through some screen shots for a Disney film that I didn’t get. I was bummed about that. Got a call a few weeks later and Mel’s company had seen the screen test I’d done. They asked if I could put myself on tape in Dallas, where I grew up. Then I met him and was offered the role. I was pretty thrilled. He was an awesome director for a kid to work with. He made the experience a lot of fun on the set and it left a lasting impression for me. I was just a young kid doing films.

FB: Yeah. I like hearing how he engaged with you. That’s all a kid wants.

How early did you start acting and when did you know you wanted to be an actor?

NS: I knew at a young age. I was one of those weird kids that went to my mom at the age of four years old. Told her I wanted to act when I got older. I started doing plays when I was really little. It’s stuck and that’s where it all started.

FB: I know you weren’t originally slated for it but I wondered how you got the part of the Yellow Bastard in SIN CITY? 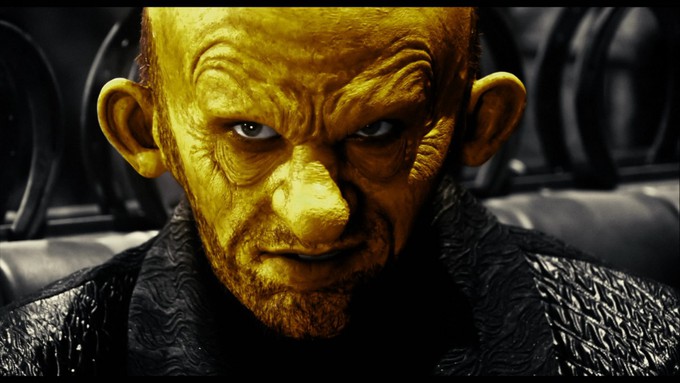 NS: I don’t know. (Laughs) I auditioned for Robert Rodriguez and Frank Miller. I think it was for another role. In the movie, he has that accident and becomes that creature. I only had a small role at the time and I believe it was Steve Buscemi who was going to play the Yellow Bastard. He fell out, due to some conflict. Robert called me and asked if I could do that role as well. He wanted me to call him back on his answering machine to see if I could sound like him. I did that. And nothing. A couple of days later Robert came home and he’d forgotten he asked for that. He was playing his messages, which shows how old it was. He played my message and it scared the shit out of him. Then he remembered it was me and he was like Oh my god. That’s the story of how I got cast in that. It was really challenging. Frank Miller was there. He drew the graphic novel. I felt like, now I have to go sound like what he created in his mind. It was intimidating.

NS: It was awkward but in some ways it helped. You had to pronounce things or do them over the top to show emotions. It was challenging and weird but a cool character that people seem to remember.

FB: I mean that could be SIN CITY’s tagline. It’s a weird film but it’s kind of cool too.

Your standout role for me will always be BULLY. You’re just such a great jerk. No offense. (laughs) Can you tell me what you thought of the role at the time and looking back on it now? I believe it’s close to the 20 year reunion. 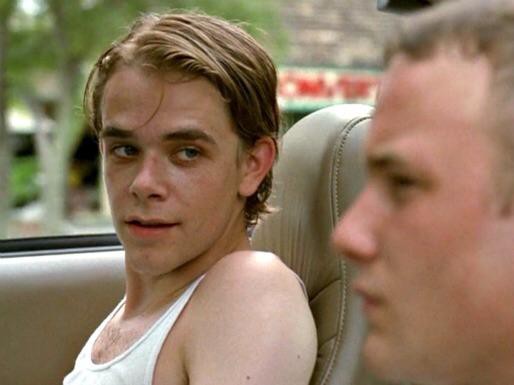 NS: The movie has aged well. I think more people approach me about that movie than anything else. That’s pretty cool for a movie that was a low budget indie film. It was such a compelling story. Especially being true crime. Everything in the movie was taken directly from the personal accounts. I think that’s why it resonates. It becomes that stranger than fiction thing. Combined with that shocking altruistic aesthetic of Larry Clark’s filming. The following for that movie has only grown over time. It’s kind of cool to see.

What is your favorite dark or horror film?

NS: I really like THE SHINING. I think that’s still one of the scariest stories/film ever made.

FB: I wouldn’t argue that. It’s up there.

NS: When I was young, I couldn’t watch that movie with myself. I needed people around me.

FB: Even now, I am afraid of that bathtub scene. That’s creepy shit. (Laughs)
NS: It’s done so artistically it seems timeless.

FB: I know it was a rough time but I wanted to know if you had any good memories of playing John Connor in TERMINATOR 3?
NS: The whole film was so much fun. I got to go up to the Los Angeles forest and shoot uzis with a SWAT team. I got to ride motorcycles. It was crazy. I learned all of these cool skills. Felt like I was a kid. It was a blast.

FB: You said it perfect. You got to walk into a forest and shoot an uzi. That’s pretty kick-ass.

Can you tell me anything about WHAT JOSIAH SAW?

NS: That’s a unique one. I haven’t seen the movie yet. Vincent Grashaw is over the moon with how it turned out. I’ll just say it falls in that horror genre but it’s hard to define. Maybe elevated horror? I had never read anything like it. It’s hard to encapsulate the story but it’s really hard to just plop it into the horror genre. I honestly expect great things, but haven’t seen the finished product yet.

FB: Why do you personally think that CARNIVALE didn’t connect with a broader audience, at the time?

NS: I don’t’ really know. It’s tough. That’s another one I get approached for, all the time. A couple people have told me if it came out today it would be more successful but I don’t know. You can kind of see those slow burn stories or series that take a little more time is more accepted now. At the time, it was new. I guess it’s polarizing. People come up and are literally angry at me for it having stopped. I’m like, I didn’t do it man.

FB: It’s not the easiest question. I appreciate you answering it.

What book would you love to see made into a film?

NS: Interesting. That’s a good question. Probably a book called RULE OF THE BONE by Russel Banks? It’s about this teenage kid looking for his dad. It’s darkly comic. Russell Banks wrote that screenplay for the Nick Nolte flick AFFLICTION. This is completely different in tone with more of a comic feel to it. I think Paul Thomas Anderson had the rights over 20 years ago. I’ve always been waiting for it to be made into a film.

FB: Is there a director out there you’d love to work with above all else?
NS: Paul Thomas Anderson. I just mentioned him and he’s still fresh.

FB: What should our readers look out for from Nick Stahl next man?
NS: I am doing the show FEAR OF THE WALKING DEAD right now. I come into the series later in season 6. That should be out next year in 2021.

NS: (Laughs) I have a feeling that may happen at some point. I’ve been told that maybe that happens on that show from time to time. But thank you! I do appreciate that.

FB: Thank you for your time today Nick. It was a blast talking with you.

NS: For sure. Have a good one.

HUNTER HUNTER drops in select theaters, on Digital and On Demand on December 18th! 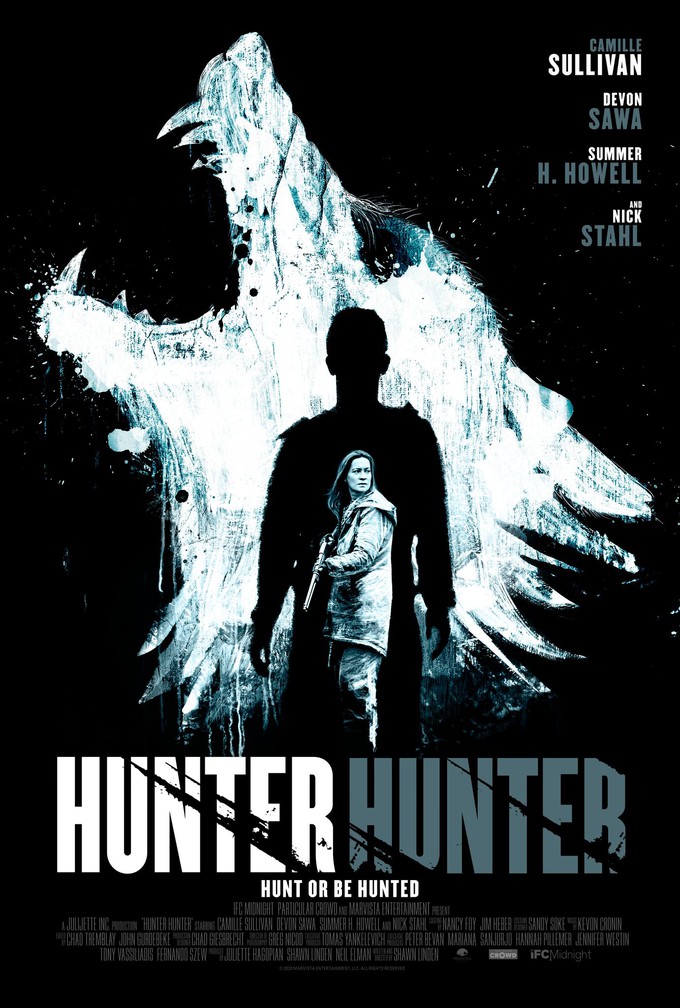