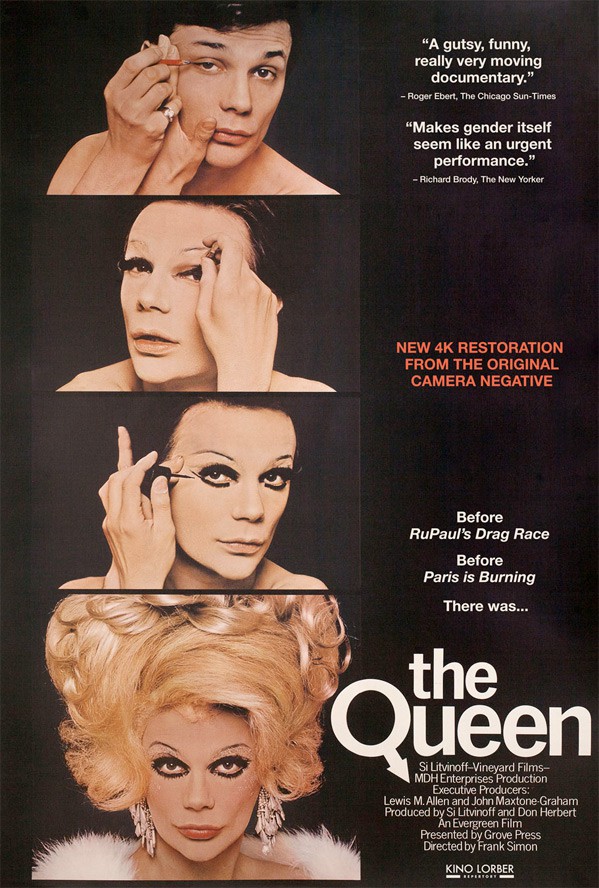 The good folks at Kino Lorber Repertory released a 4K re-release of director Frank Simon's 1968 documentary "THE QUEEN." Some of Frank Simons other documentary films are "Weekend of a Champion," "Polanski Meets Macbeth," and his solo comedy film "The Chicken Chronicles" from 1977. "THE QUEEN" premiered at the Cannes Film Fest back in 1968 and has been a cult hit with the LGBTQ community ever since.

"THE QUEEN" revolves around New York Cities bustling Drag Pageant scene of the late sixties and follows the fabulously fierce and venomous vixens that battled for the crown and clout. For any of you Pop Art aficionados this is also a must-see because the King of Pop art the one and only Andy Warhol was a judge on the panel that would vote and crown the National Drag Queen of Queens!

Kino Lorber describes "THE QUEEN" as-
"Decades before Paris Is Burning and Rupaul's Drag Race, this ground-breaking documentary about the 1967 Miss All-America Camp Beauty Pageant introduced competitive drag to the world, along with LGBT icon and activist Flawless Sabrina. Watch for Andy Warhol one of the pageant’s judge."

Here is the devastatingly drama-filled and fiercely femme'd trailer for Frank Simon's 1968 documentary "THE QUEEN."

Frank Simon's 1968 documentary "THE QUEEN" will be voguing her way back into theaters starting on June 28 in a new 4K restoration from the original camera negative! What do all of you Kings and Queens surfing the web out there think? Is this up your alley? It is mine!