FRIGHT FIGHT FRIDAY’S KILLER KIDS BRACKET ROUND #4 BRANDON (Brightburn) VS CHRIS (The Hole in the Ground)!

Hey there, fellow horror geeks and monsterphiles! Prometheus here with round #4 of FRIGHT FIGHT FRIDAY’S KILLER KIDS BRACKET, BRANDON (Brightburn) VS CHRIS (The Hole in the Ground)! Let’s take a look at our fighters! 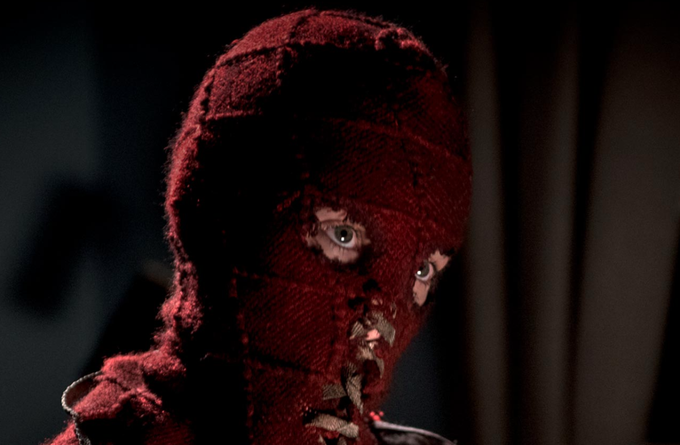 In the version the world knows and loves, the child decides to use his unique abilities for good and in defense of humankind. The question that Brightburn poses is, what if the story went the opposite direction. What if that child decided humans weren’t worthy of being saved and instead viewed us as insects?

Yes, Brandon is basically “you know who” with an evil twist, and he is extremely lethal. He does have one weakness… of course. Brandon is highly vulnerable to the metal his spaceship is made from. Other than that, good luck harming him physically. He’s also of the mind state that humans are worthless insects so, don’t expect any mercy or sympathy from him.

CHRIS (The Hole in the Ground) 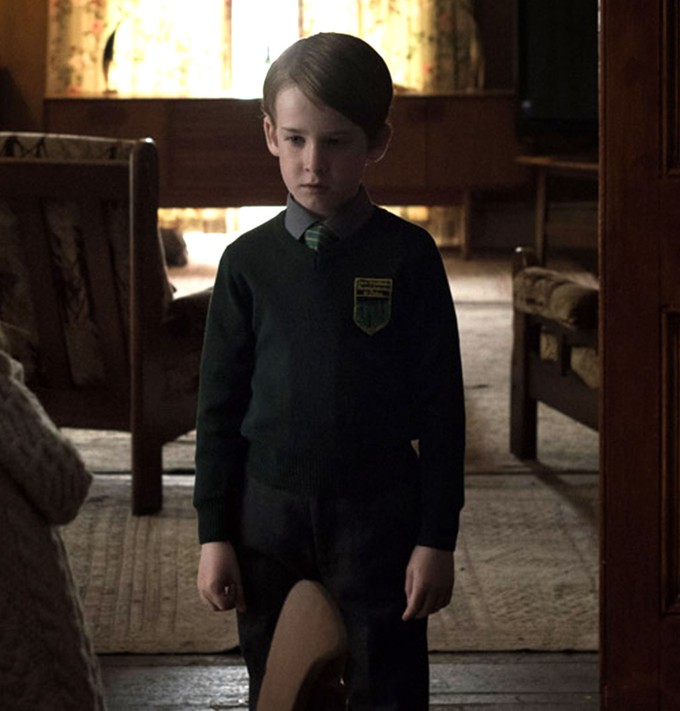 Chris’s story is interesting. He and his mother take off to the country. We assume she is running from a bad relationship, but this is never confirmed. (More on that later.) They meet the standard “crazy neighbor” who’s son died prior. She is notorious for claiming “he wasn’t her son, he was an imposter.”

One day after asking why his dad isn’t there, Chris gets mad and runs off into the woods. His mother goes looking but instead finds a giant crater in the ground. Upon returning home she finds Chris is there already. Chris starts acting weird and eventually, she comes to think he might not be her son at all. After the kid flips out and tosses her around, she knows it. for sure.

She goes into that hole and passes 2 skeletons. (More on that too.) She does find Chris and brings him home. Or does she? It's implied this second Chris might be another imposter… considering there are probably hundreds, maybe thousands of these shape-shifting creatures down there.

To be clear, a lot of the events in the film can be called into question because Sarah, Chris’s mom, suffers from delusions. She has vivid hallucinations and this entire thing could be in her head. Remember, I said it is only implied that she is running from an abusive relationship. Maybe she is just having an episode. Maybe, she isn’t the hero of the story. Either way, we’ll be taking the film at face value for the sake of the fight. The Chris who came back from that hole had immense strength and can shape-shift, able to take the form of anyone he touches. He can also see very well in dark environments. 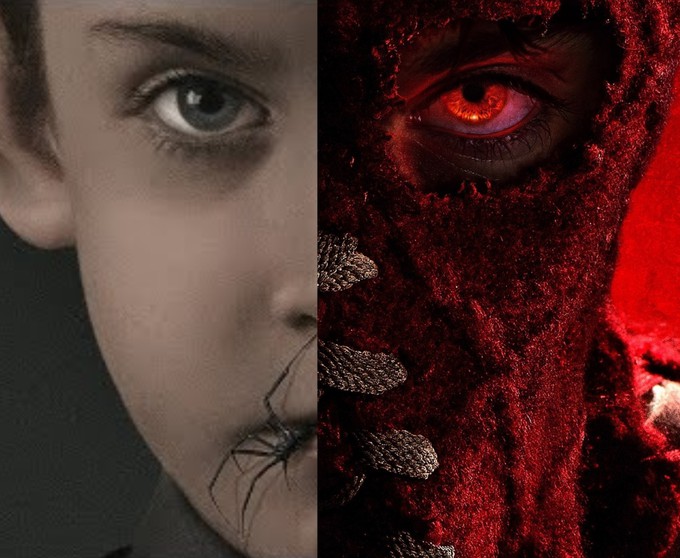 The neighborhood’s as quiet as an abandoned department store during an outbreak. The houses are a good distance apart, separated by thick woods. The home is small but quaint. Nothing fancy, or memorable about it. No adornments hang on the outside, no signs that say, “Home is where the heart is,” or even “The O’Neil’s” A nameless mailbox sits out front, painted with only a number. Nothing that would give you a clue as to who lives here is visible to passersby.

Which is exactly how you would want it if you were running away. Running from a bad relationship or running from yourself. Either way, you wouldn’t want to advertise.

Ever since the… “incident” with Chris at the last home, things have only gotten weirder. Her delusions increased by the distance Chris has placed between them. Every day the words of their prior neighbor Noreen, crazy as she may have been, ring so loudly and clearly in her head that often she wonders how others can’t hear it.

She went into that hole, and she brought her son home. So, she’d thought. Thinking back on that day though, there were two skeletons in that damned hole. One was Noreen’s son. The other must have been Chris. Those creatures, they can take the shape of anybody, but she was so happy to have him back, she hadn’t even considered he could be another imposter. Now, that was all she could consider.

Her days have been spent in a prison of her own fear and paranoia, induced by the ever-increasing thought of being murdered by her own “son.” Possibly some guilt for not noticing sooner, but she did what any parent would do… Right?

These are the thoughts that race through Sarah O’Neil’s mind as she sits on the edge of her bed. The lights are off, and in her hand is a loaded six-shot revolver. The question of her own sanity the only thing keeping her from putting it to her head and pulling the trigger.

She knows where she should aim the pistol, but knowing and having the fortitude to act are two entirely different things. What if she’s wrong? What if she’s the bad guy, and after everything that’s happened, how could she be sure? Ever really be sure?

Such is the conundrum of her life. Confined to solitude and constant self-doubt, wondering if the person in the other room is her son, or if he’s even a person at all. The hallucinations come and go. More often than not she finds it hard to tell the difference, to find the seam between reality and illusion. Her own thoughts become less reliable day by day.

A knock on the bedroom door pulls her out of herself and back into reality. Her hand shakes, and she drops the gun to the wooden floor as the bedroom door opens slowly. Chris slides through the doorway and looks down at the gun. Their eyes lock for just a moment before Chris speaks.

“Are you going to shoot me?” the boy’s voice is frighteningly calm, and monotone, catching Sarah off guard.

“Wh-what did you say? Shoot you? Baby, no. Mommy would never do anything to hurt you. You know that.”

“Maybe you wouldn’t have hurt him but…”

“Him?” As the weight of what was just said dawns on her, Chris smiles. Sarah lunges for the gun, but he’s fast. With unnatural strength, he throws her into the adjacent wall. She falls to the floor but manages to get to her feet. As Chris closes in, all she can do is scream.

He didn’t feel bad, and why should he? Parents? They were insects in comparison. All of them are. Weak creatures who like to pick on those who are even weaker. They’re below his feet, and not fit for anything but worshiping him. Only him.

With everyone who knew his true identity (and weakness) dead, it’s time to start making it clear. He is their ruler now. Not their soft and squishy President. Him. The first thing he would do is fly to their capital. He’d go sit in the Oval Office and laugh as they try to stop him with their useless weapons. How their bones would break. No one would pick on him - ever again.

The wind is glorious against his face as he barrels toward his destination. The people below are the size of insignificant ants while his body cuts through the air effortlessly like a missile. He lowers his altitude a bit, flying over a small town looking for nothing in particular. Suddenly, he hears a high-pitched scream coming from a house beneath him. Now that’s interesting, he thinks to himself.

He lands on the ground in front of the house, his feet leaving deep marks in the earth. Removing his red hood, he takes a few steps toward the house when a woman comes running frantically through the front door.

“Do you need help?” His voice is compassionate and true. “Are you okay?”

“He’s trying to kill me!” The woman points back toward the home. “My son…”

The woman’s body explodes like a water balloon the very moment the two beams connect with her chest. Blood and pieces of flesh-covered bone blow back against Brandon’s face. He closes his eyes, turning off the lasers.

Wiping his face slowly, he smears some of the blood across it diagonally. He looks toward the home and places the hood back over his head.

The wall crumbles easily as he flies directly into it. With his heat vision, if someone else is here, he will find them. His head turns quickly as Chris comes crawling down the hallway, lunging at him. The boy’s strength takes him by surprise, knocking him to the ground.

Brandon smiles underneath his hood as he stands up. His head cocked to the side inquisitively. Chris is inhumanly quick and scurries around Brandon’s legs, again taking him to the ground.

Brandon stands up furious from the taunting, and this time when Chris lunges, he grabs hold of him by the throat. Chris reaches his hand out, touching Brandon on the arm. Brandon watches as Chris’s body changes in front of him, and suddenly, he’s looking into his own eyes.

Confused, Brandon releases his grip, dropping Chris to the ground. “What? How did you?”

This time, it is Chris who smiles as he runs right at his bewildered challenger. In a bit of a surprised and nervous panic, Brandon swings wildly. The blow connects, caving in the front of Chris’s skull. He drops immediately to his knees.

Brandon’s eyes begin to glow a deep red beneath their closed lids. Before Chris has the chance to fall forward, those villainous eyes open wide.

A little while later…

“What do you think happened here?” His badge shines in the glow of the moonlight. His skin a pale, sickly color as he turns to his partner with his hand over his nose.

The two of them stand in the tattered home. A large piece of the roof is missing and the debris lay scattered across the area, but that wasn’t what was making them ill. Directly in front of them, on the floor is what’s left of a young child. His body almost entirely blown to bits by something incredibly powerful, but there are no other signs of an explosion. A woman, who they assume to be the child’s mother, lies outside. Her body in the same, horrendous condition.

“Jim,” one officer quietly says to the other. “Look over there.” He points to the end of the hallway. In the shadows by the back corner are two glowing, red lights. 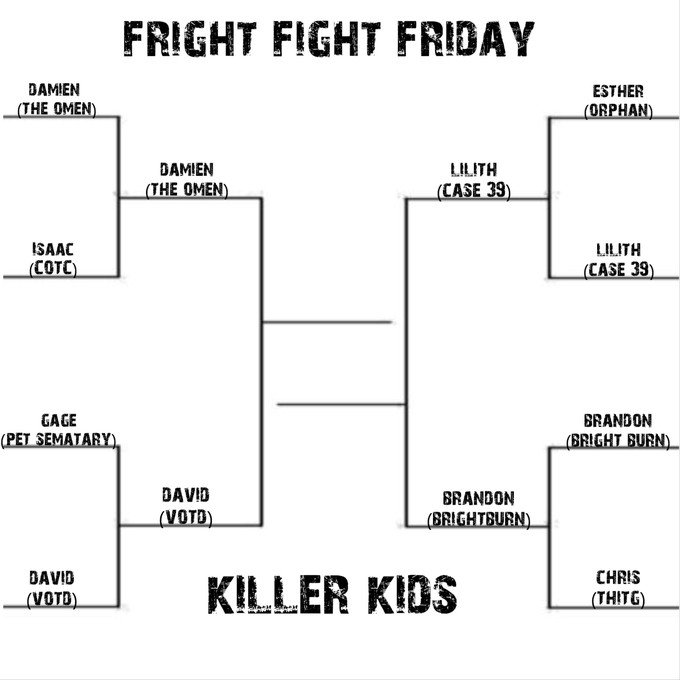 I think we all knew how this would end. Does anybody out there disagree with this outcome? Chris is quick, Chris is strong, and he's creepy as hell, but Chris ain't shit when compared to what equates to an evil version of Superboy.

Brandon's immense strength and numerous superhuman abilities grant him a preposterously large advantage over our little hole dweller. Hey, at least Chris got a couple of takedowns early before Brandon realized what was happening. Good for you kid!

What do you think out there? Am I way off, or do we all agree with Chris being handed a quick beat down? Yell at me in the comments below! See you next week for the first round of the Killer Kids Bracket Semi-Finals, DAMIEN (The Omen) VS DAVID (VOTD)! Place your bets now! All bets are final!