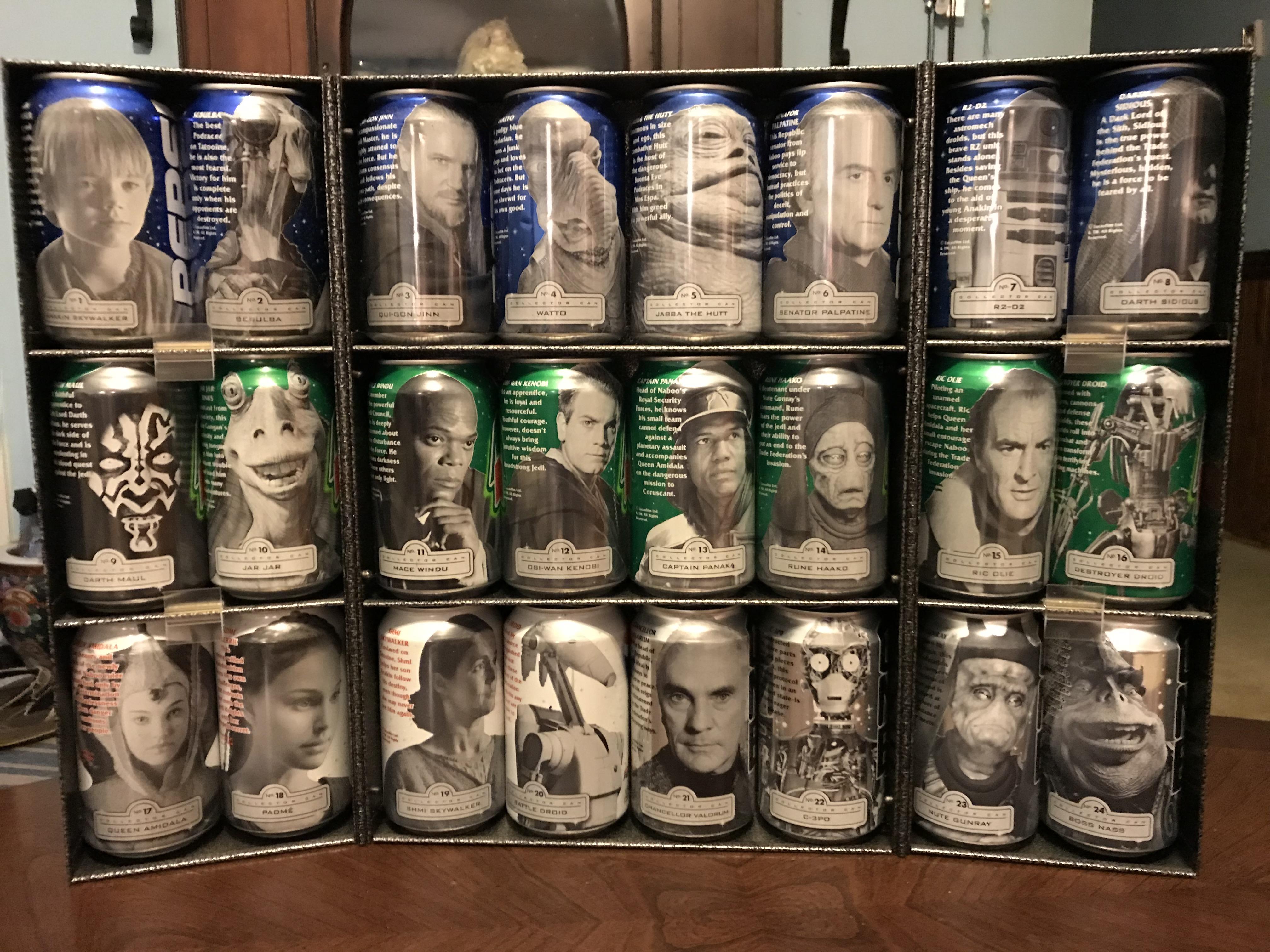 WARNING: The following may cause your virginity to spontaneously regenerate.

The spring of 1999 belonged to THE PHANTOM MENACE.  The summer of 1999 belonged to the backlash.  There had been so much hype that it was impossible for any film to possibly meet, let alone surpass, fan expectation.*   Electricity was in the air, a sense of growing excitement unlike anything we’ve seen before or ever will again; and then once it reached fever pitch, it was gone, like a sudden, global blackout.  No film will ever be so anticipated as EPISODE I, nor will any pop culture event feel like such an unexpected shart in the pants as your date answers the door.  We as humans have since learned to pack spare undies when it comes to such matters as Event Movies.

The buildup to May 19th was the best and worst of times.  It was incredible to walk into Borders and see floor to ceiling displays with Darth Maul (“So badass!”), young Obi-Wan Kenobi (“So dashing!”), Queen Amidala (“So…weird.”) and Anakin Skywalker (“So…wait, a kid’s in this???”).  STAR WARS was back.  After all those years of waiting and dreaming of untold adventures leading up to the trilogy I could recite by heart, this was it: the dawn of a series that would expand the mythology, and add a new Testament to the Geek Bible.

But it also felt like something was being taken away from me.  I’m sure I wasn’t the only geek or nerd** who experienced that utterly disconcerting and thoroughly unexpected emotion; that bizarre sense of loss.  No one can lay claim to their STAR WARS fandom as a singularly personal possession – it’s part of the public consciousness and a cornerstone of the entertainment industry.  Everything from the way films have been made, marketed, and distributed since 1977 has dipped at least one giant toe in the STAR WARS pool.   Well before that advent of THE PHANTOM MENACE, everyone on Earth knew May the Force be with you, and I am your Father,*** and a million sight gags and references in films as diverse as THE NAKED GUN and BILL AND TED’S EXCELLENT ADVENTURE were immediately recognizable to even the most sheltered neophyte.  Everyone “knew” STAR WARS the same way everyone “knows” The Beatles.  It’s a part of our shared cultural heritage.  You don’t have to like it, but neither can you avoid it.

However, once a spectacle has passed, most people move on to the next one.  It’s the fans – a word short for fanatics, it’s worth mentioning – who remain.  The passing of a fad is a lot like a funeral in many ways: everyone shows up for the service, talks shit about the corpse, and then they go home.  Those who truly loved and miss the deceased, however, return to the cemetery to visit the gravestone.  They can’t let go.  They don’t want to let go.

That was STAR WARS, post-1983.  It was dead.  It was memorialized and spoken of in revered tones, but it had lived a full life, reproduced in the form of the next generation of special effects-driven franchises, and its students and disciples were busy crafting new worlds, new galaxies.  Sure, there was the growing Expanded Universe of tie-in novels that flourished with the appearance of HEIR TO THE EMPIRE, and the surprise bum rush success of THE SPECIAL EDITIONS; but the arrival of THE PHANTOM MENACE was different.  STAR WARS had been reborn.

Everyone was camping out for it, calling in sick for it, planning their weekends around it.  I knew, intellectually, that my relationship with these films, nurtured and cultivated during a long period in which there was no one with whom to share it, had become in many ways uniquely personal; and it was both shocking and invasive (?) to see two incredibly hot girls at the mall -- the sort who never would have given me the time of day if I’d mentioned my love of STAR WARS, even back when I had hair -- discussing THE PHANTOM MENACE as they, like, totally came walking out of the 5-7-9, LOL.  No, the first three were Episodes four, five and six, Hot Girl #1 explained to the even Hotter Girl #2.  The new one goes back in time to tell how Anakin Skywalker became Darth Vader.  Sounds silly now, twenty years later, but there was a time when Hot Girls the world over seemingly had no idea (to me, at least) about the episode numbering, or even Darth Vader’s real name, because why would they?  Oh my God, that’s BABY STUFF.  And NO, I will NOT go to Homecoming with you, LOSER.  Hey everyone: this NERD just asked me to HOMECOMING!  Can you BELIEVE it…?

And it was on that afternoon, walking through the mall, that I knew STAR WARS was about to be snatched away from me.  It was no longer “mine.”  Now I’d have to stand in line overnight for premiere tickets, trying to arrive ahead of the same goons who’d made fun of me or beat me up in middle school for reading AVENGERS comics, or Tolkien, and for loving things that, once upon a time, were the refuges of disenfranchised outcasts who chose to stay inside during recess to play DUNGEONS & DRAGONS.  It was easier than getting hit by a football or being called faggot.  In a way, the very thing that made us nerds -- our love of SHIT THAT WAS UNCOOL -- was a safe haven for being called out on it.  So now these very same Douchey Jocks and stupid but very Hot Girls were taking something from me that was mine.  Something precious and innocent and fragile.  Something they’d laughed at and made fun of; and in a matter of weeks, after seeing THE PHANTOM MENACE, they’d return to laughing and making fun of it again; only now there’d be fingerprints that would take years to come off, like someone unboxing a limited edition action figure you’d kept on the shelf for over a decade, roughly handling it with fingers sticky with maple syrup.

(Yes, I know: this sounds absolutely maudlin, self-involved, and somewhat hilarious.  I recognized all these things at the time, and understand them even moreso now.  Self-awareness is both the gift and curse of adulthood.)

STAR WARS was everywhere.  Rows of action figures lined toy store windows, packaged with dialogue chips that, when held next to a Qui-Gon Jinn communicator replica, would allow the respective character to recite such memorable lines as I’m a PERSON and my NAME is ANAKIN.  There was a Jar-Jar dildo-shaped sucker that emerged from his plastic mouth and required you to fellate his face in order to consume it.  There was a PHANTOM MENACE soundtrack CD that spoiled a main character’s death in the track listing; there was also an admittedly brilliant parody of “American Pie” by a clean-shaven (and remarkable good-looking) “Weird Al” Yankovic that told you the entire story in a fraction of the movie’s run time.  There were shirts.  Cups.  Beach blankets.  Cereal boxes.  I wanted to buy everything and then hide it from the world so they could move on to the next thing.  So I could horde it selfishly and protect it from a new generation of casual fans who hadn’t earned it.

Because suddenly everyone was an expert.  Everyone could tell you all about the original 1977 film and recite that classic scene we all grew up on where Jabba the Hutt confronts Han Solo at Mos Eisley.  Or they wanted to argue whether the “Jedi Rocks” song (in what everyone was now casually referring to as “Episode Six”) was an appropriate choice to make back in 1983.

There were nonstop, embarrassing advertisements for KFC and Taco Bell on the television featuring STAR WARS iconography, and every case of Pepsi product instructed you to FIND THE GOLD YODA CAN!  The consolation prize was a Mountain Dew with Battle Droids glaring back at you, which was the perfect thing to wash down that Pizza Hut that came in the Anakin Skywalker Podrace box.  It was like an all-you-can-eat buffet with nothing but your favorite cake and cookies and ice cream and pie, except it didn’t taste right, but you wanted it to taste right, and you didn’t want anyone else to have any.  It became nauseating because you couldn’t stop eating, only you’d paid to be there and everyone else was stuffing their faces for free.

How was this different from 1977?  From 1980?  From 1983?  Was it the fact that, the first time around, we all came to the table together, and experienced the joy and the magic and the wonder, collectively?  Was it the period of time that had lapsed during which the flavor of the week became old news, and our willingness to initiate backlash revealed how cynical we as a society had become?  Was it because people are one step above dogshit and delight in pulling down our idols?  Or was it just that I was a stunted Manchild who wanted the sandbox all to myself, and hadn’t gotten over the fact that I never looked as good as the cool kids, or dated the Hot Girls, or felt allowed to like what I liked regardless of how “cool” it was (or wasn’t)?  Was it the fact that, as a collector of toys, books, movies, music, and memorabilia, I am, by nature, selfish in my love…?

The spring and summer of 1999 seemed insistent on provoking a response, one that reared its ugly head again in 2001 when the exact same cycle began, this time with THE LORD OF THE RINGS.

And then it ended.  Not only for the fair weather fans on the scene, but for the Lifers who saw the film and felt betrayed.  George Lucas raped my childhood became a quasi-ironic catchphrase.  While hyperbole, many people became disillusioned.  Something special, no longer was.  Unsold action figures sat on the shelf, and the only Pepsi left were the cases featuring a young, neutered Darth Vader.  It all seemed silly now.  It felt embarrassing.

* One could make the argument that there was no way THE FORCE AWAKENS could deliver, either, but I think the failure of the Prequels -- in particular, the massive letdown following THE PHANTOM MENACE -- gave J.J. Abrams a boost.  It might be an unfair advantage, but the fact that he objectively made a better film was the icing on the cake; the truth is that THE FORCE AWAKENS was benefited by the fans for wanting it to be better.

** Often frustratingly misquoted as “Luke, I am your father.”