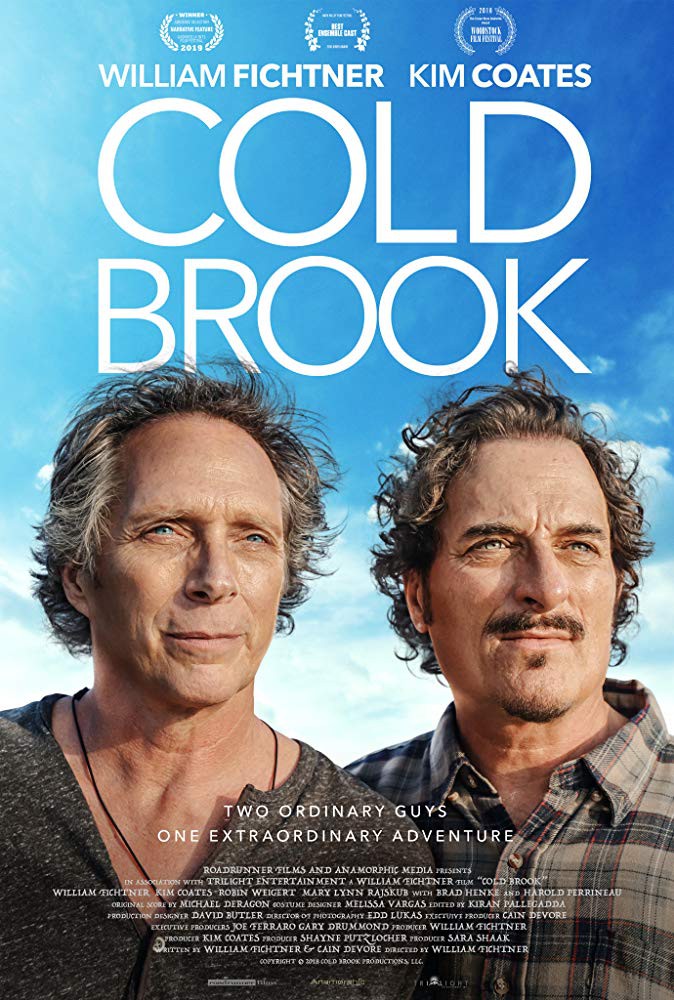 Character actor William Fichtner's directorial debut, COLD BROOK is now out in limited release, and it's the surreal tale of two friends (Fichtner and Kim Coates), who encounter a lost ghost named Gil (Harold Perrineau) trying to find his way home. Fichtner was kind enough to clear a few minutes to discuss the film, and we barely scratched the surface.

ekm: On behalf of Ain’t It Cool News, I want to thank you for taking the time to talk to me today — I really appreciate it!

ekm: I watched COLD BROOK. It was fantastic. So, it’s your directorial debut — tell me a little bit about how the project came about. Was it a screenplay you generated, or was it something that kind of fell into your lap?

WF: Well, I co-wrote it with a very good friend of mine named Cain DeVore. The Reader’s Digest version is that in 2001, I was shooting the film BLACK HAWK DOWN in Morocco, and I met Kim Coates for the first time while working on that film...so I met my best friend when I was forty-four years old in Rabat, Morocco. I was such a fan of Coates that a few years after we came back — and Kim lives really close to me out here in L.A. — I went to my buddy Cain, and I said, “I have an idea for a story, and I’m not really sure where it’s all gonna go, and it’s a story about friendship, and I wanna write it for me and Kim.” That was always from the beginning the intention. Fast-forward twelve years and a lot of time feeling it out and creating this particular story, and eventually all the elements came together and we raised the financing, and I was super committed on shooting the film in my beloved hometown of Buffalo, New York, and in the summer of 2017, that’s exactly what we did — we shot the film.

ekm: I definitely want to circle back around to the Buffalo connection, but something I wanted to touch on first is the fact that this is your directorial debut, and directing oneself is a very challenging thing even for a seasoned director. What made you decide to do both?

WF: The list is too long as far as challenges go, but I will say this: years, even two or three years before we shot the film, I would spend weeks and even sometimes a couple of months in my hometown, figuring out locations and things. I’ve had my eye on this, and my belief, for a very long time, so producing it was really probably more energy than anything else. Yes, it is my directorial debut, but I felt like co-writing it over these years, I felt like I had a really strong sense of obviously the characters and where they came from, and when it came down to the eleventh hour and all the sudden we’re going to shoot this, the one thing that I really didn’t have time for was any sort of self-critique on my own acting in it. Thank God I knew the story as well as I did because there really wasn’t the time for me to go through whatever process I go through as an actor. There just weren’t the hours in the day. This was a rare circumstance because of being involved and wearing so many hats on this project, that it was that rare time when there really wasn’t the time for that, because over the years of writing this, all the things I would go through as an actor I kind of already went through thinking about the role, so when it came to being on set and actually shooting the film…it’s not like I looked at the monitor to self-critique myself. I would look at Kim Coates and go, “Was that any good?’ And he would go “Yeah, I would do another one, Billy.” It was a lot of faith. A lot of trust, when it came to the acting part.

ekm: One of the film’s central themes to me seems to be invisibility, both of the living and the dead.

WF: Yeah, well the story began about friendship. Literally, the desire to write about friends. Out of that, out of creating a couple of ordinary guys that have an extraordinary experience, as we developed and wrote the story, we wanted an experience to happen to them that only happened to them, so that it was a bit of a secret. Something they’d have to go through. Something that would challenge them. Honestly, we didn’t begin it Day One thinking about characters with guilt; that came out of this. It came out of the desire to challenge them and to bring the best out of them. That’s where the entire Gil storyline came from and all the historical significance that goes with it. All of it was born out of that desire. You know, a couple of guys in a small town: life isn’t going to be that different. They’re gonna have their ups and downs, but they’re not gonna have an event like this. I didn’t want an event that was gonna be like, “Oh there’s gonna be a big explosion,” or a heist, or millions of dollars are at stake, and there’s guns. It was always meant to be something that would challenge who they were and their sense of how you do the right thing when presented with something like this. You know, how far do you go to help a stranger? To swing back to what you asked about invisibility, they were never gonna be guys that were that visible. This changed it for them. At least, to them, in a huge way. Then you have Gil, who is this lost soul, and he has his own issues, but to them, it’s very visible about what’s happening. They can only do one thing: to be their best selves.

ekm: Now, obviously, you’re from Buffalo — tell me about the decision to screen it independently there.

WF: I have an incredible distributor, this company Vertical [Entertainment], and they did an amazing job for us, and I really wanted the film to green in Buffalo. It’s a bit of a dream come true to take the film back home. My distributors were very kind an very supportive where I could work that out, and find a theater that was interested, and it was a big deal. Things like that don’t happen when you don’t get the support of all involved, and I did, and I’m really grateful for it. I can tell you this much: we open in select cities around the country, but I am going to be in Buffalo the weekend that it plays, and I will introduce that film every single showing except for the Friday night showing, and Kim Coates will do that, because I’m shooting the show Mom here in L.A. But I will be getting on a late flight so I can get myself there, and I feel like it will come full circle to be there in my hometown for that weekend.

ekm: Well, if there’s any way I can make the drive from Baltimore to Buffalo, I will absolutely shake your hand. You did a fantastic job.

ekm: I might have to take you up on that. You’re one of my favorite character actors — thanks for taking the time.

WF: I’m so glad you enjoyed the film, and that it spoke to you!

Originally, I was supposed to talk to Perrineau as well, so if I have one complaint, it's that I didn't have the opportunity to ask him to scream Waaaaaalt over the phone. Maybe next time.