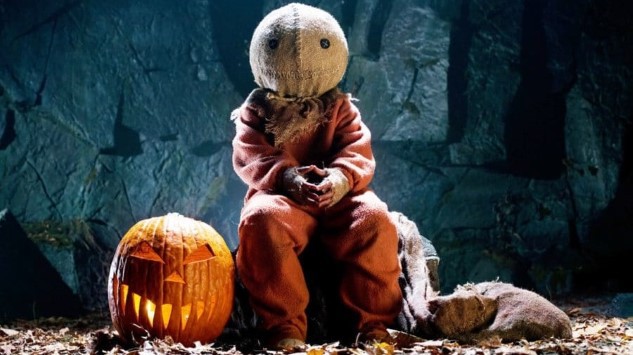 During the past month, I've posted a Horror topic for each day, and tried to inspire conversation and debate.  I've covered as many aspects as I’ve had the time and opportunity, from films and their various subgenres, to books, authors, trends, and history.  I barely scratched the surface, but I’d say I made a go of it.  There's been some great back-and-forth.  I thank everyone who's contributed.

But for me, the coolest aspect — both here, and on social media where the articles have been shared — has been the way Horror fans have communicated their common love in a way that reveals the kind of person who embraces this sort of fantasy: intelligent, insightful, imaginative types, as willing to turn off their brains as they are to peel back the sociological and historical layers to find subtext in films too often dismissed as "simple."

I've seen the directors and actors from some of these films chiming in along with their fans on social media, because while many aren't celebrities to Joe Walmart, they're adored by their followers – and they return this love in kind.  Horror is a unique genre in that its "stars" are approachable.

I've seen friends I've known for years who've never met, now building online relationships and engaging in more and more familiar conversation – often disagreeing, but always appreciating a well-informed counterargument – united by a common interest leading to a mutual respect.  Some of my best (and longest) friendships have been the result of this common passion, and allows us to sit down at a table after years without seeing one another, and fall immediately into warm, comfortable, and – so important! – intelligent discussion.  And it allows me to do the same with new friends as well.

Allow me a bit of annoying, autobiographical information to help illustrate my thesis.  I’ve been writing about the genre for well over a decade, as a contributor to various websites, and print publications.  I made two feature films: the first was a no-budget indie called ROULETTE that, while not “Horror” per se, had an ending so violent and offensive that I was banned from two film festivals, and denied the ability to ever screen anything again at a specific Baltimore venue; the second, BUTTERFLY KISSES, was as much a critical analysis of Found Footage disguised as entertainment as the serials I write for AICN.  The latter film gave me the opportunity to travel around the United States from festival to convention to college lecture, all leading up to the Halloween 2018 release, and it was an eye-opening experience for many reasons.

The first and most obvious was that sense of community I found, and not only at Horror-specific gatherings where there were celebrities behind whom trailed a line of passionate fans.  Creators, in particular, are drawn to one another, both to share their work with like-minded artists, and to sit in the bar afterward for hours and discuss the nuts and bolts of the craft.  Or maybe just to talk about the flicks that scared the shit out of them, and made us all want to scare the shit out of other people.  I hung out with Bill Lustig at the 2018 Silver Scream Film Festival, run by Famous Monsters of Filmland; I stayed out too late and drank way too much at the Horror Hotel after party, catching up with filmmakers I’d just seen on the West Coast a few months prior, and would see again on the East Coast shortly after.  The same faces, the same films.  THE NOTHING.  MURDER MADE EASY.  DERELICTS.  I’M DREAMING OF A WHITE DOOMSDAY.  Awesome films from awesome filmmakers, best exemplified by GenreBlast’s showcase at the Alamo Drafthouse.  The sense of kinship and community was hardly fleeting, as it endures through social media, through email, through future events, future endeavors, and real relationships formed and fueled by mutual respect that is in turn a result of our mutual love of Horror.

I met people who loved my film, and I met people who didn’t.  But we all loved the same foundational elements, and could agree to disagree.  These weren’t just fellow creators, but rather enthusiasts who realize that the Sam Raimis and Peter Jacksons and Wes Cravens of tomorrow come from the same place: the world of offbeat, independent film.  Movies you have to go out and find, and then tell your friends about.  These are the people opening new doors for the voices of tomorrow, and who recognize that the only way to make change within the mainstream is to support work that exists outside of it.

This level of passion and support extends to the websites and podcasts who offer a platform for innovative creatives to discuss and promote work otherwise buried by the lack of wide marketing.  Shows like The Overlook Hour, I Like to Movie Movie, Found Footage Radio, Madness Heart Press, Horror Nights In, Kick Ass Thunder Dudes, and so many others; sites like Dread Central, 1428 Elm, Film Threat, Signal Horizon, Cinapse, Fear Forever, and on and on.  I found support in these places, and it’s support based on respect from the genre rather than what movie star’s name is on the poster.

This last point is notable.  While I can tell you what a great experience Scares That Care might have been, I also played a number of non-genre festivals, and the experience was equally notable.  While I never had any distinctly negative situations play out (indeed, the Sunscreen Film Festival was a highlight of 2018, and my life), there is an air of pretension that relegates Horror films to midnight screenings at best, and mild scheduling embarrassments at worst.  The audiences are very different, and the expectations specific.  You will certainly find new viewers and create word of mouth, but the creators carry themselves differently, and the networking opportunities, friendships, and opportunities to collaborate are fewer.  Or maybe it’s just because I was the asshole with the Horror movie.  Who knows.

It comes back to community.  It comes back to having a piece of the pie, and wanting to share it.  And it all comes back to my question at the very, very beginning of this series: Why scary movies…?  For that matter, why Halloween?  Why dress up in costumes?  Why choose to be afraid?  Why do these things matter?

I love Horror films.  And I love Halloween.  Anyone who's had even a casual look at the main page throughout the month of October will realize this.  Every year, I gorge on pumpkin pie, and drown it in pumpkin ale.  Sometimes I go out of my way to scare the kids who come to the door; that’s faded a bit as middle age rapidly approaches.  I listen to Horror movie soundtracks all day, and end it with AN AMERICAN WEREWOLF IN LONDON.  It’s sort of my Christmas, in a lot of ways.  But: the high point is taking Garyth trick or treating.

My son has autism.  He was diagnosed five years ago last Thanksgiving.  He's still a little guy (seven years old as of August), but Halloween 2014, as we were going through the process of diagnosis, I was acutely aware of how different he was from the other little boys and girls who were out in costume.  He screamed if we tried to take him to a house; if and when we managed, he didn't understand the concept of taking a piece of candy from the bowl and placing it in his bucket; and when asked who he was dressed as, how old he was, or anything else, he stared away in silence, the same as he did with us every day.  We were afraid he might never talk back then.  It's still a very difficult thing for me to think about, and to remember.

Five years later, and Garyth has come so far.  At first I would spend several days practicing and role playing during the last week of October, and because of it – and because of all the strides he'd taken with each successive year – Garyth was soon running from door to door and knocking, saying TRICK OR TREAT to everyone who answered, and THANK YOU or HAPPY HALLOWEEN! when given candy.  He reached in, took a piece, and put in in his bucket, all by himself.  When asked who he was, he answered SPIDER-MAN!  If someone made a joke, he told them THAT WAS FUNNY!  When they waved, he said BYE BYE!  And that big inflatable bat in the neighbor's yard?  Apparently, HE IS POOPING!  And now, he watches AN AMERICAN WEREWOLF IN LONDON with me, and wants to discuss whether it’s painful to undergo physical transformations, and whether monsters actually exist.  Just the other day, he told me he was hunting the house in search of stray children to eat.  The sound of his voice is still magical to me, and he doesn’t even know it.  His dark sense of humor just makes it even better.

Halloween means more to me now than it did before – and it always meant a lot.  It encourages children with social issues to interact.  It encourages one to knock on otherwise closed doors.  It encourages generosity.  It encourages community spirit from neighbors who otherwise might never speak.  And it encourages those with difficulties to step outside of themselves, and to become super heroes.  Or monsters.  Or whatever else they want to be.  It encourages us to be more.  Being scared?  Man, that's just the icing on the cake.

These films and the topics contained are drawn from our shared childhood fears and phobias, and thus allow us to recapture an innocent time in our lives when the world was a large and mysterious place filled with dark corners that encouraged us to dream up incredible possibilities.  It was the wellspring that fed imagination that we continue to channel.  We recognize that in one another, whether we're fans, or the next (or current) generation of creatives attempting to give an audience what was given to us: wonderful fright, and a magic that fades as we grow up – unless we choose not to let it.

So long as we choose to embrace fear, it has no power over us other than the addictive quality of joy; a joy that draws people together and keeps us talking.

Trick or treat, everyone.  Thanks for reading, and participating.