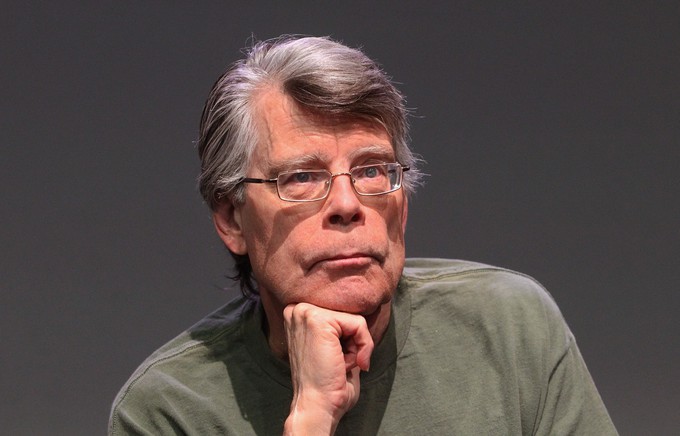 Stephen King is a notoriously inconsistent writer.  His finest novels are unparalleled popcorn genius, and his worst stuff --  while still absorbing – can be utterly frustrating.  It’s a curious, schizophrenic body of work that inspires an equally curious, schizophrenic reaction from readers.  People love them, or people hate them.  King is either an underrated author consigned to the status of Hack due to the wealth of terrible movie adaptations, or else he is, indeed, a Hack because of his hackiness.  The books themselves are frequently overwritten with clumsy deus ex machina resolutions,* nonetheless spun with the earthy voice of a chatty friend at the neighborhood watering hole.  His work is never boring, even after hundreds and hundreds of pages eventually wrap up in a completely unsatisfying way.

King’s career can be divided into four eras.**  You’ve got the Early Years (pre-1974), when his output consisted of lean, nasty novels and EC Comics-inspired short stories for Men's magazines; the Cocaine Period (1974-early '90s) when his popularity soared and his output per year was nearly as excessive as his growing page count; Post-Intervention (early '90s - 1999), at which point his books became the forced, often pseudo-feminist dry-drunk works of a writer trying to relearn his craft but hindered by the handcuffs of sobriety; and Returned From The Dead (post-1999 near death experience - Present), at which point the Dark Tower-obsessed King became in many ways a caricature of himself.

Everyone will have a different list, but the following is mine.  Note that the books and films should be treated as entirely different beasts, and this list focuses on the former rather than the latter.  King’s Big (and Small) Screen adaptations will be discussed in a subsequent article.

1.  Pet Sematary.  A truly nightmarish meditation on death that hits a feverish high during the lengthy stretch in which our protagonist slips in and out of a fantasy – one in which he saves his son from being run down by a tractor trailer -- and we’re given the imagined future history of the child growing to adulthood and leading a happy life as part of a normal family.  This fantasy is one we experience, along with father Louis Creed, on the day of the three year-old’s funeral.   It provides a nice, organic segue into an excruciatingly detailed account of the harrowing grave robbery of the unrecognizably mutilated toddler.  What comes home to Louis is unimaginably horrible, and yet we’re forced to imagine it nonetheless.  No parent should be able to read this book without repeatedly putting it down long enough to give their kid an unplanned hug.

2.  Misery.  A book within a book about writing and the creative process, told from the singular perspective of an author trapped in a farmhouse bedroom at the mercy of his obsessed-fan-turned-jailer.  Any writer who’s ever been up against an immovable deadline and completely devoid of inspiration or decent health will relate to Paul Sheldon’s predicament, particularly as King teaches us a hard lesson about how ideas are uncovered.  Misery is an exercise in claustrophobia and character identification, as we are denied a universal narrator, and we know nothing more of the events or location beyond the locked bedroom door than our protagonist does.

3.  'Salem's Lot.  A modern-day reworking of Dracula by way of Peyton Place, and our first glimpse at King's deft ability to create a believable ensemble cast no less than the size of an entire fictional village.  This is one of the most successful attempts to integrate the classical vampire into a contemporary setting, and for neither to feel at odds thematically or tonally.  Brisk yet epic; intimate and yet sprawling.

1.  The Bachman Books.  King’s pseudonym produced some of the author’s nastiest, darkest work, and it’s glorious.  Rage carries the unhappy distinction of being The Ghost of School Shootings to Come, but despite King’s disinheritance of this early novella, Bachman’s other content is equally grisly.  The Long Walk and The Running Man presage the Reality TV epidemic, and offer us a glimpse of what we’d be watching instead of The Bachelorette were things to become even worse than things already are; and the little-mentioned Roadwork is probably King’s purest study of a man on a self-destructive collision course with his own finality.

2.  Different Seasons.  While Rita Hayworth and the Shawshank Redemption is easily the best-known of the four novellas that make up Different Seasons, STAND BY FANS would recognize The Body, despite the lack of warmth Reiner would inject into his adaptation.  Apt Pupil is the highlight for what it says about the curious relationship between children and adults, and in this case, it’s one that brings out the worst in all involved.  The Breathing Method feels almost out of place after the three exhausting journeys through lost innocence that precedes it.

1.  Survivor Type.  A surgeon is stranded, Robinson Crusoe-style, on a desert island with naught by his cache of heroin…which serves as a painkiller as he begins the long, horrifying process of eating himself to stay alive.

2.  The Boogeyman.  The father of three dead infants, each the victim of crib death, unloads his post-traumatic stress on a psychiatrist, along with the belief that his children were in fact murdered by something living in his closet.

3.  Suffer The Little Children.  A puritanical school teacher is driven slowly insane by her students, whom she believes have become possessed, one by one, by an evil intelligence bent on harming her.  The ending -- particularly in our post-Columbine world -- is shocking mostly because Religious Nuts + Guns = Dead Kids.

1.  Lisey's Story.  Here it is -- the moment where King drove head-on into the existential wall that is the combination of 1) a near-death experience and realization of one's own mortality, and 2) buying into his status as a certified Pop Culture Icon.  Written from the perspective of the widow of America's late-great Author of the Century (seriously: if King sees himself the way this guy is described, then his delusions of grandeur and sense of self-importance are really repulsive), Lisey's Story suffers from one of the storytelling handicaps of latter-day King: people doing stupid things simply to move the plot forward.  In this case, a woman allows herself to be physically assaulted and then stalked by an obsessive fan of her Dead Salinger, and despite around the clock police protection, hides from them the ongoing plot developments that would immediately cause there to be no further plot developments because this shit ain't gonna flush itself.  Filled with the nauseating secret baby-talk language of her bafflingly obnoxious former marriage, this book involves interdimensional time travel and visions and oh my God it took me three fucking tries to finish this.

2.  Mr. Mercedes.  King at his most sexist, racist, and tone-deaf. Once again, an overweight, middle-aged protagonist ends up with a hot, younger woman who -- within five minutes of their meeting -- becomes a submissive sex toy, while his African-American lawnboy intentionally (!?) shucks and jives his way through the narrative, saying things like (and I'm paraphrasing here, but I'm really not exaggerating) Oh, massah, me goan cut dem grasses fo' you fo' SHO!  Then the whole thing ends up at a concert with a Boy Band substitute for the Jonas Brothers.  Bad, bad, bad stuff.

3.  Duma Key.  A mish-mash of King's earlier, better work, squeezed out through a sausage grinder into a snapcase hardcover binding, and not unlike a bloated, crap-stuffed intestine blocked by a week of prescription antibiotics.  This time he decided to branch out; instead of the protagonist being a writer, it's a one-armed painter.  The problem is, it's hard to write about evocative, haunted paintings we never get to see, much the same way it's impossible to write about fictional musicians playing equally fictional music.***  Seaweed demigods and talking dolls and characters experiencing flashbacks in which THE TRUTH is revealed by supernatural means.

4.  The Girl Who Loved Tom Gordon.  A girl gets lost in the woods and listens to a baseball game on her Walkman while pursued by a bear.  This is literally all I can remember about the book except that I seem to recall the story contradicting itself on how the girl came to be lost in the first place.  Plus: I hate baseball, and I don't love Tom Gordon.

5.  The Tommyknockers.  This is the book that, for many, signaled the beginning of the end of their romance with The King.  The ultimate example of his almost shocking tendency to overstay his welcome -- by several hundred pages or so -- The Tommyknockers is his third longest book (following The Stand and It, respectively), except that unlike the two that preceded it, nothing happens.  By King's own admission, the book was written at the height of his substance abuse issues, so it should strike no reader as odd that every character is experiencing chronic nosebleeds and engaging in obsessive compulsive behavior throughout a non-story filled with weird pro-environmental rantings.  A flying Coke machine attacks a reporter if you make it that far.  Many didn't.

So what do we know about King, given his vast body of work?  We know he writes about writers, writing.  As a writer myself, I find it fascinating at times to see glimmers of his process by way of these protagonists, but it becomes transparent and repetitive.  Religion pops up often, though it’s earliest presentations focused on hypocrisy (Carrie) or ineffectiveness; later, King would write novels that were conscious allegory (The Stand) or outright Christian Horror fiction (Desperation).  We also know that King enjoys revisiting themes of childhood, and that some of his best work falls under this banner, particularly the darker stuff (Apt Pupil).  By that same token, domestic violence is troubling in it frequency: Jack Torrance isn’t the first Bad Parent in King’s oeuvre, but he’s the best known.  More casual visitors to the author’s universe might be struck by how often wife-beating factors into his stories, or form the basis of the narrative.

Perhaps it’s because of the prurient content that readers are drawn back to his work, or discover it during their teenage years.  The Shining is an utterly compelling read because it’s a lean, stark novel about growing madness; but equally-compelling is Insomnia, a book about growing old and dying that makes the reader feel as though they're growing old and dying.  Either way, he’s one of our finest storytellers, even when it’s a Shaggy Dog we wish he’d take out back and shoot.  Reading his prose is like listening to that good friend who can make the most mundane incidents fun to listen to.  That’s why we keep picking up his novels.  Even the garbage is fun to root through, and it’s hard to say that about an author so prolific.

*The term,, which is derived from the theater tropE of “the God from the machine,” refers to any climax involving the necessary intervention of a powerful deity, because the storyteller has either 1) written the characters into a corner from which there’s no possible rescue, or 2) wants to show God’s infinite goodness, and why the protagonists pledge themselves to Him.  In The Stand, a book considered by many to be King’s best, the literal hand of God reaches down to blow up the Bad Guys.  It’s easily the most unsatisfying resolution the author has put to paper, in part because of how long it takes to get there.  Likewise, IT is one of -- if not THE -- greatest horror novels of all time...until the sudden third act appearance of a giant, talking space turtle, followed by a preteen girl initiating a gang bang with her six friends in a shit-filled sewer.

**Much like the career of Elvis Presley, which is equally fascinating to dissect in terms of “periods."

***Except for when it's supposed to be The Vampire Lestat singing quasi-Dungeons & Dragons lyrics to what we're told is Spinal Tap-style glam rock, in which case it's hilarious.