ekm’s 31 NIGHTS OF HORROR: EVENING 11 – SEDUCTION OF THE INNOCENT

ekm’s 31 NIGHTS OF HORROR: EVENING 11 – SEDUCTION OF THE INNOCENT 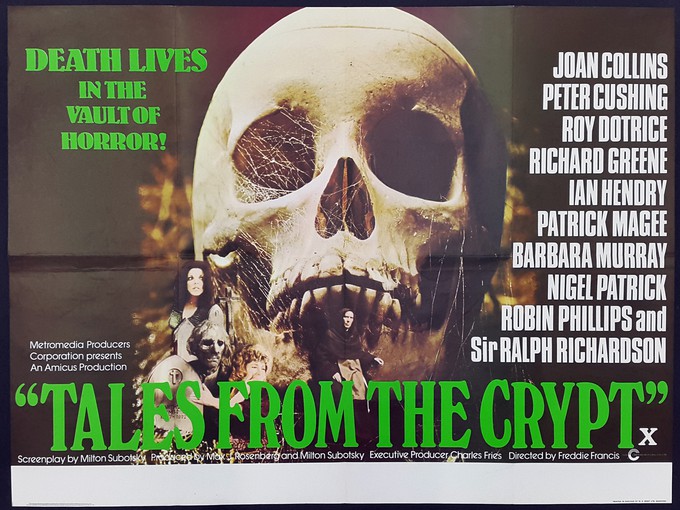 While never as strong as its source material (or even the Amicus films from the early 70s), HBO's TALES FROM THE CRYPT delivered seven seasons of violent, politically incorrect horror, featuring some of the finest writers, directors and stars of the genre.  Hosted by The Crypt Keeper -- a cackling, punning puppet designed by FX superstar Kevin Yagher (and resembling less his comic book counterpart than an amalgam of Jack Davis's rendition, Johnny Craig's Vault Keeper, and "Ghastly" Graham Ingles' Old Witch) -- the true star of the show was the final ironic "twist" that capped each episode of the anthology.  TALES FROM THE CRYPT, first as a comic, then a Portmanteau duology, and finally as an HBO series, offered ghoulish morality tales that were puritanical in their rigid sense of right and wrong; and reflected Eisenhower-era ideals for hip Gen-Xers, with winking, ironic portrayals of women as manipulative she-spiders, and men as idiot slaves to their base impulses.*

For many kids, this was their first introduction to Anthology Horror, just as the comics of the 1950s were for the Richie Toziers of the time.  Prior to his critically-acclaimed MAD Magazine, publisher William Gaines was in the business of wholesome comics.  For whatever eventual reason, Gaines, along with collaborator Al Feldstein, hit upon the notion of offering up a counterpoint to the then-popular Romance genre, which told tales of near-sexist Meet Cutes designed for an otherwise absent female audience.** Why Horror was selected is uncertain; the fact that it was a genre that had not enjoyed success in the four-color format seems curious, or perhaps a shrewd and calculated business move.  Needless to say, The Vault of Horror, The Haunt of Fear, and The Crypt of Terror (later retitled to match the name we all know and love today) were a combined success.

Perhaps EC Comics was too successful in their aims; by the end of the decade, the outraged Dr. Fredric Wertham had launched a campaign to eliminate such periodicals due to their perceived encouragement of juvenile delinquency.  The industry nearly collapsed due to the explicit bans placed upon material designed to show prurient behavior.  With the instatement of the Comics Code Authority, EC turned toward satire (and biggest commercial success; MAD is still published today, though it started sucking hard around 1988 with the departure of Don Martin); other companies had to scramble, and respond.  Thus, Wertham is arguable an accidental influence on the creation of Marvel Comics.

But let’s go back, before the comic book burnings and congressional hearing.  Let’s talk about the content that provoked such an outraged response.

The format never changed.  You had the lurid covers that drew the eye and emptied the pockets of allowance money.  Four stories, introduced by one of the Ghoul-lunatics; each appeared in the other two's books, but the respective host bookended each issue with two stories.  The Crypt Keeper, Vault Keeper, and Old Witch filled their intros and outros with the worst puns imaginable, which only served to underline Wertham's mistake (or perhaps reinforce his premise): the comics were fiendishly funny.  The subject matter -- which drew as much from film noir as it did from Horror -- was often DOUBLE INDEMNITY in claret.  Sister title Shock SuspenStories and its similarly-themed crime thrillers followed a virtually identical format (minus the hosts, who sometimes showed up anyway), and to near-equal popularity.

But the real uniformity across the line was the presence of THE IRONIC TWIST that I mentioned earlier.  If the Crypt Keeper and his undead pals were making bad jokes, it's because the tales themselves were black comedy.  Protagonists tended toward narcissism rather than victimhood; they were largely unlikeable in the extreme, and had no problem fucking over friends, family, or employers.  The women were figurative (and occasionally, literal) vampires: femme fatales in the Veronica Lake mode, using men for their wealth, and often running into the arms of the very hunky (and very destitute) stud who helped her plot her husband's demise.  Male characters were equally as gross as the females, albeit penis-equipped; if otherwise presented, they were weak-willed and ineffectual when it came to deflecting wicked, feminine charm.  In the end, the unscrupulous anti-hero would receive exactly what he or she deserved, whether a carefully-placed icepick (the guy was emotionally "cold"), or dismembered and served in a human-sized chocolate box as punishment for being an obese hog who ate away her husband's paycheck.  The real "monsters" were decidedly human, and the presence of werewolves, zombies, and -- on at least one occasion -- a gorilla with embedded human consciousness, was almost beside the point.  They existed solely to provide just desserts.***

Amicus produced two films: TALES FROM THE CRYPT and THE VAULT OF HORROR in 1972 and 1973, respectively.  Both suffered from the typical problem with Anthology Horror – namely, finding a compelling framing device.  In this particular instance, a near-identical wraparound was used twice, with the second differing only in the lack of a slumming, and clearly bored, Sir Ralph Richardson as The Crypt Keeper.  The films broke the comic mold – five stories rather than four – and suffered a bit by virtue of the very British take on American pulp: it felt in many ways too polite, even when it was heinous.  Nonetheless, being a studio with the mission statement of Rip off Hammer and make cheaper versions of their already cheap films, Amicus managed to evoke the House of Horror by virtue of appearances by Peter Cushing and the usual stable of Bray Studios character actors; the films themselves are even directed by Hammer stalwarts Freddie Francis and Roy Ward Baker.

Several of their takes are genuinely effective:  “Wish You Were Here” is a delightfully mean-spirited extrapolation of “The Monkey’s Paw,” and “Blind Alleys” is an utterly improbable but equally delightful opportunity to see an aggressive asshole punished for his reprehensible treatment of the handicapped.  “Midnight Mess” is an absurdly humorous tale of a guy who goes out for dinner, and wonders why the tomato soup is so salty, and why the waiter is serving him French-Fried Scabs; it turns out that the establishment is in the business of offering vampires a more civilized dining atmosphere.****  The crowning jewel is “Poetic Justice,” which is both nasty and heartbreaking, as poor Peter Cushing’s character, Grimsdyke, is sent hate-mail Valentines by wealthy land developers trying to force him to move off his land; he makes a startling exit, and even more startling return.  It’s probably the one instance where a TALES FROM THE CRYPT story was improved by adaptation.

The films – and indeed, the comics themselves – are largely forgotten in 2019; the HBO series endures.  Capitalizing on the wave of televised anthology series that followed CREEPSHOW and TWILIGHT ZONE: THE MOVIE,***** and then taking advantage of cable’s looser attitude toward gruesome content, TALES FROM THE CRYPT became an immediate sensation.  Unlike the Amicus film, which presented the original Gaines-Feldstein stories largely verbatim but without the winking sense of humor, the HBO incarnation clearly got the joke.  It was often tasteless, and always played for laughs.  At time, the show went too broad, and the updated stories lost their effectiveness due to the necessities of modern technology (“None But the Lonely Heart”) or the showr unners’ insistence on casting Name Actors in every episode – often the detriment of the final product.  Rita Rudner, I’m looking right at you.  And the less said about that inexplicably British seventh season, the better.

There were absolutely some winners.  “Top Billing” captures the nasty spirit of EC, in spite of Jon Lovitz being Jon Lovitz; “Dead Wait” is a similarly faithful-in-spirit translation of what’s on the page, only more disgusting due to 1) the disembowelment of a body filled with parasitic worms, and 2) the existence of Whoopi Goldberg.  “Strung Along” is a fun entry in the Creepy Puppet genre, and “The New Arrival” is some genuinely fucked up, disturbing shit.  David Warner is just the icing on an unsettling cake.

All criticism of stunt casting and overly-camp tone aside, it's a series remembered fondly by fans of both Horror and the Portmanteau format, and contains some episodes that remain shocking today.  It was an accessible HBO-produced gateway drug for the genre, and must-see viewing every Wednesday night.  PLUS: boobs.

But the comic books remain the real deal, and retain a quality no one can ever hope to replicate: both for their arrival on the scene during an era of LEAVE IT TO BEAVER and general wholesomeness, and for the legitimate desire to sell kids a product that would encourage a black-hearted sense of humor.  Somewhere, right now, Frederic Wertham is spinning in his grave; but if Gaines and Feldstein had had it their way, his retirement home demise would have been far more ironic.

*In other words, the truth.

**One of my favorite examples comes straight out of my cherished copy of My Love #25, in a story cunningly titled "No Man is My Master."  The tale -- one of four in that particular issue, which seemed a genre standard for anthology books from which there was rarely deviation -- is about a pretty young lady who dates an aggressive douchebag who treats her like total shit.  Refusing to endure the emotional and psychological abuse, our heroine begins dating a series of boring, overly-polite young men, and decides she prefers being treated like a doormat.  The story culminates with a reunion between said Doormat and her asshole former boyfriend, who picks her up, throws her over his shoulder, and announces: Me Tarzan -- you Jane!  The writer of this "progressive" work was none other than outspoken soap-boxer and early Social Justice Warrior, Stan Lee.  The date?  1973.

****”Midnight Mess” remains (in)famous for an edit made to the climax, in which the victim is strung up by the vampires, who forgo etiquette in favor of sticking a tap in the guy’s throat and filling their glasses straight from the source.  Apparently considered too intense, the scene features a clumsily-inserted still frame of the bloodletting, prompting fans to speculate over the content missing footage for more than four decades.

*****These included – among others – THE HITCHHIKER (lots of sex but not much else); TWILIGHT ZONE (featuring many clunkers, but one truly effective Bradbury story, “The Burning Man”); ALFRED HITCHCOCK PRESENTS (a show that was actually scarier than the Horror shows, particularly first season episodes “An Unlocked Window,” “Final Exit,” and “The Gloating Place); TALES FROM THE DARKSIDE (effective intro, featuring a nightmarish perversion of otherwise idyllic, sunlit environments; otherwise, total garbage); AMAZING STORIES (Spielberg fluff); MONSTERS (nigh unwatchable); and FREDDY’S NIGHTMARES (a masterpiece of cheap, moronic storytelling and bargain-level special effects, made brilliant through the bizarre decision to tell two separate but vaguely connected stories per episode).