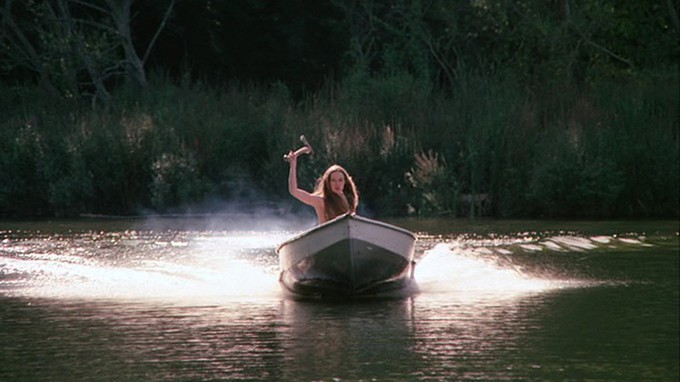 Rape and revenge!  Ever since LAST HOUSE ON THE LEFT introduced us to the double-threat of Wes Craven and Sean S. Cunningham (both of whom would later go on to create two of the three most famous Slasher icons of all time*), the Brutalized Woman subgenre (for lack of a better title) has held a particularly nasty reputation in the realm of Exploitation Horror.  LAST HOUSE -- allegedly a reimagining of THE VIRGIN SPRING -- is the tale of two teenage girls raped and murdered by a group of escaped criminals, who in turn are dispatched by the victims' parents.

It took a certified auteur to introduce this premise to the mainstream.  Ever since John Boorman decided to add a little stench to his arthouse work with DELIVERANCE, in which Ned Beatty is brutally buttfucked and humiliated by two Gentlemen of Southern Distinction, the Avenging Victim of Sex Offense trope has entered Horror cinema with an unlubricated, phallic thrust.  The film, which adapted James Dickey’s novel, is often cited as a tale of Man vs. Nature, and while this makes for lovely subtext worthy of study, we all know why it’s still discussed today, and it has more to do with a scene involving forced pig imitations than any lofty artistic goals.

I SPIT ON YOUR GRAVE ups the ante in every way -- four guys rather than two -- and multiplies the number of rapes so that they occupy nearly half the run time.  DELIVERANCE showed classy degradation by penis; I SPIT ON YOUR GRAVE threw Classy on the floor, broke its nose, and told it to shriek while it was internally hammered for forty-five grueling minutes.  Creative flourishes include the previously-mentioned Forced Anal on A Woodland Boulder; Champagne Bottle Peekaboo; and, of course, that all-time favorite, Sexual Mentorship of a Special Needs Virgin with Erectile Dysfunction.  This isn't even factoring in the wonderful ways in which Camille Keaton dispatches her attackers.  You have to admire director Meir Zarchi’s commitment to his subject matter, especially given the film’s original title, DAY OF THE WOMAN.

Troma laughed at such subtlety; in MOTHER’S DAY, the attackers drop down to a pair again, but the victims number three – one of whom is then folded up and kept in a dresser drawer.  It would be adorable if the film weren’t so mean-spirited, largely due to the fact that MOTHER’S DAY is allegedly satire.  Humor and rape aren’t typically complimentary, and it’s questionable whether viewers at the time got the joke (or whether the filmmakers knew what punchline they were trying to use).  Whatever the intended objective, the film was successful, and launched a schlock-based, micro-corporate empire.  By the time Troma had crawled forth from the primordial ooze with MOTHER'S DAY, the tropes were lining up like Video Nasties in a Mom & Pop store.

Horror stories are morality tales.  We see it in the very roots of the genre, and in the subcategories that continue to branch out.  Films like SCREAM brought the old playground discussions to the forefront, underlining certain key truths in these films: if you have sex, you die; and if you drink or use drugs, you die, etc., et al., ad infinitum.  It's a puritanical and distinctly patriarchal view of young -- and primarily female -- behavior, as well as an attitude whose origins we can find in just about every world religion.  Apple, anyone…?

So what is the appeal of films in which a woman is sexually assaulted and then punishes her abusers in horrible ways?

I'd be all in for the argument that films like I SPIT ON YOUR GRAVE, MOTHER’S DAY, or that largely-unseen desert-based variation, VICTIMS, are feminist works…provided any of them were written or directed by, you know, women.  These are swollen, pulsing, sausage factory productions.  The girls are cast and then directed to simulate trauma for what is indisputably male consumption.  We aren’t watching impersonal attacks by a masked, anonymous killer: these are reality-based moments of shame and degradation, re-enacted for mass consumption.  I haven't met many ladies -- Horror fans or no -- who see the value in the subject matter, even if the exploitation of forced entry is followed by righteous vengeance.  For some reason, girls don’t like watching this stuff.  I know: I don’t get it either.

LAST HOUSE ON THE LEFT is the first and tamest of the bunch, but with I SPIT ON YOUR GRAVE, things got meaner, beginning with the brutal attacks (plural), which constitute half the run time, followed by an all-too realistic (and traumatizing) bathtub castration that makes the somewhat over-the-top rape seem positively cartoonish by comparison.  This isn't Date Night stuff.**  While Horror has certainly been somewhat defanged since the Me Decade, the subsequent remakes of these questionable "classics" have retained a rather startling degree of ugliness that's been purged by their Slasher brethren.***

So what's the appeal?  Men are hardwired for sex, but if we're trying to combine chocolate and peanut butter, then why isn't pornography enough to satisfy sex-as-cinema?  Why rape?  Is this another holdover of conservative values, in which the girl is "clearly asking for" and deserves punishment?  And if so, are the castrations and violence that follow simply a male form of self-punishment for craving the sexual violence in the first place?  Or are these films actually consumer product that reveal the Mr. Hyde lurking within all of us?  Or are we supposed to root for the Survivor Girl, who, in grabbing axes, or using ropes and nooses to dispatch her offenders, is essentially embracing the penis that was previous alien to her?  Or maybe it’s supposed to be – wait for it – kinda hot…?

Or perhaps we're reading too much into all of this, and forgetting that exploitation cinema exists to appeal to our baser instincts and give us what we'd otherwise be forced to ask for.  It's certainly cheaper than the prostitute who does the things you're afraid to ask of your wife.  For two hours, Jekyll can indulge.  Of course, once again, it comes around to what male viewers are getting out of this; whether or not there’s anything there for the ladies isn’t something I’m qualified to judge.

Like anything else, it’s in the way that you use it.  Rape exists.  It’s a terrible thing that happens.  So is infanticide.  So are school shootings.  So was Jeffrey Dahmer.  Because an act is reprehensible doesn’t somehow disqualify it for dramatic usage; if so, we’d all be watching Hallmark Channel movies, or that truly offensive shit Alex Kendrick keeps forcing on us.  Again, it’s a question of whether the violence is a plot motivator, or whether it’s just the plot, period.  Yes, most Slasher flicks are very light on story, and what little there is, is built around Kill Sequences.  There is nonetheless something impersonal about these bits, and the utilization of an imaginary, supernatural psychopath pushes us closer toward the realm of fantasy.  Unless perpetrated by a zombie, sexual assault doesn’t comfortably nest within this category of fiction, and when it’s glorified by serving as the plot rather than as a plot motivator, we have to wonder what we’re watching, and why.

I'm just going to come right out and say it: normal people don't want to watch rape as entertainment.  This might offend you.  You might be thinking -- right now, as you're reading this: Hey!  That Myers asshole just hit me on the Pride Button and activated my Hurt Feelings!  Camille Keaton is a beautiful woman, and there's nothing wrong with opening a cold one and settling in to watch that young lady get stuffed in every hole!  Perhaps you're that person.  Perhaps you rationalize your enjoyment by the fact that you're watching the attackers receive their comeuppance (and in that one particular sequence, involving a bathtub, a hand job, and a sharp knife, it's enough to make even me squirm).  If that's the case, there's something seriously fucking wrong with you.  It's okay -- there's something seriously fucking wrong with me, too, but your problem is pretty indefensible.  Not that I'm judging, of course.  Enjoy.

*In the case of Cunningham, accidentally.

***The 2010 remake of MOTHER’S DAY is a curious beast, as it bears almost no relationship to the 1980 film, and reframes the concept as a home invasion.  Technically, the girls in the original film invaded Ike and Addley’s forest domain and are forced to pay the price; in the updated version, the situation is reversed.  Apart from the absence of rape-based revenge, MOTHER’S DAY 2010 also drops the only intriguing subplot from its source material: the notion of “Queenie,” a demented, animal-like sibling of Mother’s who lurks in the wilderness, waiting for her opportunity to kill her housebound sister.  The final jump scare is lifted from FRIDAY THE 13TH, and while not scary, it’s effective by virtue of its surrealism (due largely to the obvious soundstage lighting).