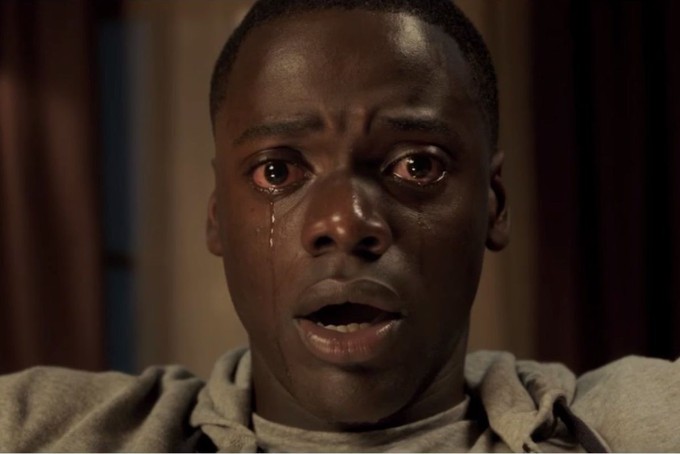 Where's all the Black People? -- A kid I was friends with seventh grade

I think we can all agree that when it comes to American Horror films, the only color more dominant than red is white.  It's a rather pale genre, filled with Caucasians running away from other Caucasians.  There's always the Token Black Friend in a supporting role, and less frequently, the Token Asian or the Token Hispanic; these latter two options are supporting-supporting roles, and it can only be one ethnicity or the other, never both.*  And yes, the minorities do, in fact, die first.

By and large, though, these are films about White People, and the scary things that happen to them.  The Japanese make some nasty little flicks for internal consumption, but only hardcore Region 1 fans will watch them (or anything that requires subtitles, for that matter); U.S. viewers are so fucking incapable of dealing with seeing foreign currency, hearing accents, or anything that isn’t immediately familiar.  Hence pointless remakes that are so close to the original (LET THE RIGHT ONE IN) that the sheer pointlessness only serves to underscore how narrow the American focus really is, to say nothing of our willingness to accept outside cultures.  I don’t go to movies to read!**

The marginalization of minorities in Horror might make more sense if it were a genre that appealed primarily to one type of viewer, but that's the kicker: African-American audiences are (and always have been) a huge percentage of the fan base.  I've gone to see Horror films where I stood out like a sore thumb in the audience -- and we're talking about some very, very non-diverse stuff (WHITE NOISE certainly lived up to the title).  I won’t even go into the stereotype of the Loud Black Woman Shouting at the Screen, other than to say: Yeah, sometimes.

So if this is the case, and if Horror is a cross-cultural source of entertainment regardless of the skin color of on-screen talent, then why is it that we don’t see more racial and ethnic variation in the movies themselves…?

The attempts have traditionally been few and far between, and typically occur when there’s a Caucasian-starring blockbuster to model off of.  There was that terrible Snoop Dogg rehash of THE CROW a while back (BONES), and everyone’s favorite Leprechaun made not one but two infamous visits to the inner city.  VAMPIRE IN BROOKLYN was BRAM STOKER'S DRACULA with Eddie Murphy and Angela Bassett.  Rusty Cundieff's TALES FROM THE HOOD served as an attempt to update the Portmanteau format for "urban" audiences, but its preachiness overwhelmed the potential for fun.  Before that, there were the Blaxploitation Horror films of the 70s (two BLACULA movies, and my personal favorite, ABBY), but it was a trend that never really caught on with mainstream audiences, possibly due to the schizophrenic vacillation between camp and straight Horror.  One minute you’re seeing genuinely terrifying imagery; the next, you’re watching an exorcism in a disco.  It’s hard to know what black audiences thought, historically, due to the very cult nature of the genre, which seems to be embraced more by middle-aged white viewers with an appreciation for Retro (or Tarantino).

If there’s been a recent success story, it’s undeniably GET OUT, which has been critically-lauded for its Horror-framed social commentary.  That’s what makes the film so frustrating.  GET OUT is promoted as a film dealing very specifically with the way in which Caucasians view African-Americans; it seems to be about the inherent dangers in passive racism.  You know: Black people are all such great dancers, so how about dancing for us?  That sort of thing.  Yet the movie doesn’t seem to be about that at all; after an hour of intentionally cringe-inducing moments involving subjugation by way of stereotyping -- be it as house maids, lawn boys, or even black men enduring their white girlfriend’s vaguely racist family -- the film seems to reverse its thesis and suggest that for all the talk about white superiority, Caucasians actually want to…be black?  And what’s more…they want to be black…and live as indentured servants?

If the film had been made by a white filmmaker, this production would be deemed offensive in the extreme, but as it stands, African-American director Jordan Peele presents the premise as a maybe-satirical, maybe-serious look at race relations.  It’s too nebulous to be sure.  If we take the concept of cultural appropriation as subtext (subtext that ultimately slams its fist through the screen to hit you square in the nose, and then lick the blood from its fingers), then fine: GET OUT functions as a commentary on White America’s long-standing tradition of 1) co-opting black culture while simultaneously pushing its people into the background; or, conversely, 2) shining a spotlight and demanding entertainment, as long as the entertainers clean up quietly on the way out.

But that’s not what Peele seems to be saying.  Rather, the idea is that black men (and, in the case of the Armitage family’s maid, a woman!) are so close to physical perfection and/or talented that their historical oppressors want to literally become them, so that they in turn can be sold into a form of slavery.  Because as we all know, if you had the ability to keep grandma alive indefinitely, you’d transplant her brain into the body of an African-American woman and then force her to live in the kitchen making ice tea, right?  It’s this weird sense of Woke self-loathing that makes GET OUT feel as though it was made by an apologetic white filmmaker rather than a black one.

If the film frustrates on any other level, it’s the issue of tone.  GET OUT was marketed as a Horror-Thriller; its trailer is filled with spooky cuts-to-black and intense-looking imagery.  However, don’t be fooled: this film is a comedy, often so broad that the film often nearly loses balance and topples over with each animated spasm of weird and occasionally inappropriate-placed comedic beats.  The fact that GET OUT wants to make a point of some sort (chiefly the concept of self-subjugation by white Americans) is reinforced by its measured intensity, which is in turn torn out by the roots by over-the-top humor.  As camp, GET OUT would work better than it does as Horror; but as it stands, the film, like the characters, want to be one thing, but present themselves as another, ultimately becoming neither.

And American-made Horror for Latin or Asian or Native Americans?  Forget it.  The nearest we've recently gotten was the sidequel PARANORMAL ACTIVITY: THE MARKED ONES, but it was strangely (?) under-promoted, and unless you check your Watch It Now queue on Netflix, you might not even have been aware of its existence.

Interestingly, there isn't much outcry.  When INTO THE SPIDERVERSE was announced, the Miles Morales Question reared its head: Why not simply create original content for minority audiences instead of putting a black guy in a costume we already identify with a white character?***  Box office proves me very wrong in my opinion on that particular subject.  Nonetheless, is there any demand for a more ethnically-diverse FRIDAY THE 13TH or HALLOWEEN update?  I don't for a moment believe that Horror is any more racist a genre than any other, but it’s genuinely surprising that there's no attempt to create specific films for specific audiences beyond one in particular.  If ever there were fertile ground for social commentary, it’s here; but as GET OUT proves, it can be, at times, an uncomfortable marriage.

Horror seems to be a socially stagnant genre with the occasional racial barnstorming (the African-American hero in NIGHT OF THE LIVING DEAD was positively groundbreaking in 1968), and audiences don't seem to mind, offering one more example of why it's an absolutely atypical genre that refuses to adhere to the rules of the cinematic medium, whether internally, or from a critical and commercial standpoint.

*If you're turning Spot the Race into a drinking game, then you have to finish the bottle if a Native American shows up.  Fortunately for your liver, but less fortunate for this most cruelly mistreated of all minority groups – one whom we seem collectively happy to overlook, by the way -- the likelihood of alcohol poisoning is remote in the uttermost extreme.  But yeah, fuck those people we stole from and can’t even bother to give their own History Month, let alone a scene in some shitty Slasher movie; but at least we have that Washington football team with a racist name they can’t even bother to acknowledge is insensitive.  You’re welcome, Indians.

**Note that every other major territory will take American-made content, and subtitle it, dub it, and screen it – whether or not it has MOVIE STARS.  An independent film from the U.S. made for almost no money, and without the benefit of Names on the poster, has a one thousand percent greater chance of being seen anywhere but the U.S.; I’m speaking from experience.  Meanwhile, we remain elitist when it comes to anything but the most superficial, commercial content – we need faces we recognize, places we’ve been to, and some frame of reference existing between two coasts.  Otherwise, it’s literally and figutatively foreign, and thus unworthy of consideration.  It’s a bizarre dichotomy, to be sure.

***My views on INTO THE SPIDERVERSE earned me a few Social Justice Warrior catcalls, and accusations of being Woke; I look forward to my opinion of GET OUT earning me the equally-incorrect title of Racist.