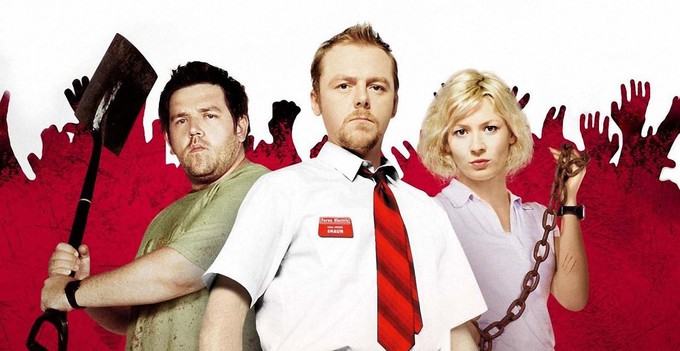 Once, long ago, my parents made the mistake of watching the HBO premiere of AN AMERICAN WEREWOLF IN LONDON with their six year-old son.  The adults laughed uproariously at the film, while the child — who saw absolutely no humor in what was going on, whatsoever — cowered in fear while finding himself unable to look away from the carnage playing out in front of him.  By the time of the films’s very abrupt ending, the Father was complaining that for all the uses of “Blue Moon,” no one had ever thought to use Warren Zevon’s “Werewolves of London.”  The Kid, however, was one step away from crying, and pondering a situation in which an individual would be forced to decide whether to commit suicide rather than undergo an unavoidable transformation, all on the word of his dead friend’s walking corpse.  A long month of interrupted sleep followed.

Now as an adult who has seen AN AMERICAN WEREWOLF IN LONDON countless times, I can see what’s so hilarious about it, and I get why my parents were responding accordingly.*  It’s a perfect storm of Funny and Fright, a thing that many viewers (and critics) of the the time couldn’t wrap their heads around.  Were they supposed to be laughing at something scary?  Were they supposed to be afraid of something so funny?  It was a confusing experience for some, being not a direct satire like LOVE AT FIRST BITE, but neither was it a straight-faced, very-very-serious Horror movie, either.

The unfortunate comparison to its contemporary, THE HOWLING, didn’t help.  THE HOWLING was in many ways more problematic than that other film about lycanthropes; it seemed to be going for chuckles that weren’t funny, but also wanted to frighten you in ways that generated bigger laughs.  The nods to Hammer by way of character names was cute, but never so adorable as the sight of Dee Wallace turning into a poodle on the nightly news.  Even as a kid I found it boring and kind of stupid, and I was a stupid kid, so I should know.  I wasn’t boring, though.

The question that rises to my mind, and then continues to circle: Is comedy in Horror a crutch for a filmmaker who knows that he or she can’t actually scare you?  As with all things, the point is relative.  AN AMERICAN WEREWOLF IN LONDON uses humor to its advantage, getting you, the audience, to laugh off the growing dread because we all know people don’t really grow fur and fangs and eat people, right?  It lulls you into a sympathetic state with the protagonist, who is rejecting the possible reality of being a modern-day Lon Chaney Jr., which is based on the hokiness of old Universal movies we’d all seen a thousand times.**  And that’s how Landis gets you.  He creates a new paradigm that’s anything but hokey.

But how often do we see this, where a Horror movie can be both funny and scary?  In writing about THE LOST BOYS, I went to great lengths to describe it as a very hip, very clever movie about vampires; I also made the equally-relevant point that THE LOST BOYS is about as frightening as Count Chocula leering back at you from a breakfast cereal box.  It qualifies as “Horror” all the same, despite having very little content that can be considered in any way horrific.  Does that mean it doesn’t count?  Do we disqualify by virtue of the film being dressed like a Goth but acting like a Hipster?  Does it matter, either way?

It does.  Until THE CONJURING series first appeared with dreadful warnings of genuine terror for any who dared to plunk down cash for an admission ticket, there had been a drought in terms of genre films making a legitimate effort to evoke fear.  PARANORMAL ACTIVITY made a game attempt, but served little more than to promote further FOUND FOOTAGE knockoffs.  With a few exceptions, “funny” was the principle ingredient in Horror films, with the genre label existing more in terms of its visual iconography.  In other words, they were comedies with any humor being of the gross-out variety.  That’s not even counting the satires and parodies; how many SCARY MOVIES were there, again, and did the filmmakers at any time realize how redundant the content actually was…?

And why was this?  Why were Horror movies — both highbrow and low — leaning so heavily into jokes designed to bust a gut (in possibly more than one way)?  Was it that Horror was a genre deserving a bit of good-natured criticism after having exhausted its way through the lengthy Slasher craze?***  Was it the success of movies like BEETLEJUICE, which lured in people who wouldn’t normally pay to watch a Horror flick?  Both, probably.

Or else there’s a third option.  Perhaps it was a deficiency in the filmmakers themselves that caused scary movies to become anything but.  If that visual iconography I mentioned is there — by which I mean tits, blood, and monsters — then you’ve got your Fangoria coverage.  BloodyDisgusting will feature your trailer, and write a review.  The fans will turn out to see it, because of course they’ll turn out to see it.  Tits!  Blood!  Monsters!  That’s all you need, right?

Maybe.  Maybe not.  It’s hard to find new ways to terrify.  If genre history is a highway, then it's littered with exit ramps, and places where various byways intersect.  There are huge, brightly-lit Rest Stops — FRANKENSTEIN, NIGHT OF THE LIVING DEAD, THE EXORCIST, etc. — and from these locations, traffic speeds up considerably.  Then, all of the sudden, some asshole driver sharing an article like this one on Facebook, drives straight into the jersey wall and flips over four times.  Now you’re stuck in traffic for five years.  How long till the next Rest Stop…?

Sometimes genres cross-pollinate, and you get good stuff (the JUDGMENT NIGHT soundtrack), and terrible, unlistenable noise (the SPAWN soundtrack).  Mixing Horror with comedy isn’t necessarily a bad thing, but when it becomes the norm, it does a discredit to the genre, and to its target audience.  When a filmmaker thinks that you’ll be satisfied by those tits, that blood, and those monsters, then what is that saying about you?  Weren’t those elements there as a means to support the original objective: to scare you?  If all you’re getting is the storytelling garnish, why is that enough for you, and is that because the writer and the director can’t dream up a concept that could get under anyone’s skin?

Don’t get me wrong: I love a stupid, gory movie as much as anyone else.  There is definite fun to be had, and it’s a welcome diversion.  The key word is diversion, though.  Fusing two different vibes to create a new thing is experimental, and absolutely welcome.  Copycats are to be expected, and they ultimately taint what was so clever about the original premise by way of association, but again: that’s nothing new, and hardly a surprise.  But when the entire Horror genre becomes predominantly concerned with emulating this tone in many different pocket subcategories, is this not a problem with the overall objective of the filmmakers?  And shouldn’t fans expect more product that makes an effort to return to roots, as films like THE CONJURING and IT are trying to (with varying degrees of arguable success)?

I love every NIGHTMARE ON ELM STREET movie — the good, the bad, and the very terrible.  But ask me which one is my favorite, and I’ll always say the first one.  It scared the Hell out of me as a kid, which I can’t say for any of the rest.  It’s a ghoulish little film about the terrible lies our parents tell us, and Stranger Danger given the Boogeyman’s silhouette.  The rest?  They’re cute.  They’re funny.  And they just make me want to watch the original, again.

*Scream Factory has just released a new blu ray edition of AN AMERICAN WEREWOLF IN LONDON, right in time for its annual viewing in the (not-Michael) Myers house.  It is, nonetheless, the third time the film has been released in this format, thus ensuring I will not only have to buy the film again so that I can say I’ve owned every edition, but I’ll also have to buy it yet again when the inevitable 4K disc is issued.  I’m not sure what’s worse: studios targeting OCD collectors, or OCD collectors.

**In THE WOLF MAN, the younger Chaney plays the son of Claude Rains, who absolutely isn’t in any way the son of Claude Rains.  Accents (or lack thereof) were a bit notorious in the Universal flicks, going back to James Whale’s FRANKENSTEIN, during which characters refer to Dr. Waldman as “Dr. Valdman” to seemingly authenticate their German status…despite pronouncing everything else in lofty, Old Hollywood mode.

***For anyone still predicting that the bubble is going to burst on the Comic Book Movie literally any minute now, I would remind readers and non-readers alike to remember that the Slasher subgenre lasted from 1978 to around 1989.  Wait a minute, never mind.  Maybe you guys are right, after all.