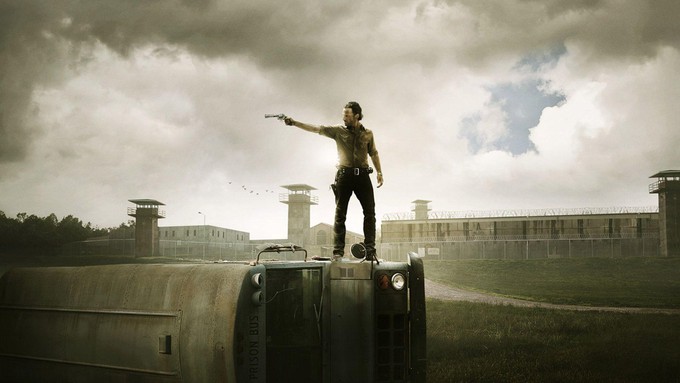 Adaptations.  Ugh.  What a can of worms.

FULL DISCLOSURE: Despite being an obnoxious, know-it-all Horror fan, I came to THE WALKING DEAD later than most.  I’m also a comic book nerd, so I'd read the series as far as it's been published, but the show was new to me.  As such, I was prepared for some GAME OF THRONES-style deviation from the source material, but by the time I was a third of the way through Season 3, I was more than a little confused.  Why did they kill Dale?  Sophia died, but Carol lived?  It was so much more interesting the other way around.  And what's up with this incarnation of The Governor…?

I'm a writer.  I'm also a voracious reader.  Growing up, I was noshing on Gothic literature from a young age (the librarian at Lincolnshire Elementary refused each week to allow me to check Dracula out because I "couldn't possibly understand it" -- maybe that's why I own about fifteen copies); later on, I moved from Stoker and Shelley and James to Stephen King and EC Comics.  I took my Horror seriously.  I also took it personally when the movies, frankly, fucked it all up.  In no universe is there a Sad Dracula, moping around his castle and awaiting the reincarnation of his lost love.  So why does it keep happening in film after film to the point where it begins to become a defining part of the story?  And for that matter, why has there never been one single version of the literal hundreds of adaptations that actually hews to the source material?*. The same with Frankenstein, for that matter -- what makes these books unfilmable?

Stephen King novels are the greatest offenders: you can count on one hand (maybe two, if you're generous) the number of films that resemble his books in a more than superficial way.  Yeah, Frank Darabont stays inside the lines, and Mick Garris essentially sets the camera up wherever Steve tells him; otherwise, it's a head-scratching buffet of questionable decisions.  MISERY is one of the author's nastiest, most claustrophobic works; Rob Reiner gives us a mild, sometimes silly version that leaves out the most horrifying moments but exchanges them for trips outside of the home, completely missing the point of locking us inside the room with our protagonist.  Kubrick clearly hated THE SHINING, because he kept the title and little else.  And let's not get started on either version of IT (yet).  The list is a long one.

But while I'm a fan of Horror fiction, I'm also a filmmaker. Adaptations necessitate change.  Compression for film; expansion for television.  Different mediums demand different packaging.  Sometimes two characters need to be combined into one, or a new character has to be created to help illustrate backstory or motivation. What works on the page doesn't always work on screen — one need look no further than THE LORD OF THE RINGS to see an example of how to do it right.  Check out THE HOBBIT if you want to see how to do it wrong.  Or if we're talking Horror, sit down and watch NOSFERATU, The Universal DRACULA, and the 1958 Hammer version, and make a list of what you see (or don’t).

I enjoyed THE WALKING DEAD up to that third season point.  It was wonderfully violent, and the soap opera elements kept me guessing.  It's followed the basic through-line of the comic closely enough that I can anticipate what's coming next ("Oh, this is where they find the prison, right?"), but then the show would throw me for a loop ("Wait, Lori's dead?  NOW?").  Then it reached a point where it felt — ironically — toothless, and treading water to fill out the requirements of a season’s length, and I ultimately gave up.  If there was a grand design, I'll just have to consider it from afar; I can’t be convinced it wasn’t a case of showrunners "improving the book" — something producers of Horror entertainment (and entertainment in general) so often feel they're doing.  After all, if fans love the source material, then it clearly needs to be fixed, or at least changed for the sake of making people wonder what the point was…right?

But while on the topic of zombies (which, incidentally, I consider one of the most bankrupt of all subgenres, given that they’re literally the same movies over and over again, which can be divorced from similar claims about Slashers by way of the absence of an individualized antagonist), we have to talk about another medium that has been given the adaptation: video games.  Yes, I’m talking about RESIDENT EVIL in particular, though these same criticisms can be easily applied to just about any other film or series of the kind.

The issue with turning a video game into a novel, television show, or movie is somehow distilling what’s fun to play into something that’s not only fun to watch, but has some sort of dramatic stakes that cause you to invest.  Unlocking a new combo move doesn’t count, unfortunately.  Some games have intricate narratives in which it’s easy to invest; others are fucking stupid.  Guess where RESIDENT EVIL fits in?

Usually I begin my articles (or segues such as this) with an anecdote or a clever witticism.  This time there shall be neither anecdote nor witticism.  Instead, I’m going to make one very simple statement: RESIDENT EVIL is a movie series for morons.  It was written by a moron, directed and produced by morons, and it targets morons who will lay down their money to further their nirvana-like moronification.  The only good thing I can say about the series is that it didn’t give me cancer (though cancer takes a while to manifest, so who knows?).

Want a plot summery?  Too bad.  There isn’t one.  Basically, you’ve got Revlon Girl (Mila Jovovich), who fights alongside gun-wielding super agents, all with some “urban” humor that presumably elicits howls of idiotic laughter from the audience despite the fact that no one ever says anything even remotely funny.  Together they try to save an annoying little British girl (Sophie Vavasseur) from a host of zombies before the city is nuked in an attempt to prevent the disease from spreading.  Then some stupid shit happens, and the movie’s over.  The fact that it seems to always end exactly where it began only makes the whole thing a greater waste of money and brain cells.

Are you the sort of person who cherishes their eardrums?  If so, stay away from RESIDENT EVIL, because you might go deaf.  The directors (whose names I won’t list out of pure spite) decided it was a good idea to make the movies get REALLY LOUD EVERY TIME SOMETHING SCARY HAPPENS.  First it’s quiet….THEN ALL OF THE SUDDEN THE SOUNDTRACK GOES UP TO ELEVEN.  I guess this was a really desperate way of trying to scare the audience, since all the “jump moments” can be seen five minutes before they appear.**

Now, I’m sure there’s that sub-set of Video Gamers out there who go to movies based on RPGs in a sincere search for epic storytelling (I once knew one such guy, and FINAL FANTASY: THE SPIRITS WITHIN was his favorite movie); and I realize these guys are sitting in front of their computers right now, reading this review, eating their Cheez Doodles and fuming that Mom is running the vacuum cleaner; and they’re thinking that RESIDENT EVIL had all sorts of neat-o in-jokes from the game that a snob like myself wouldn’t notice.  Well you know what?  They’re right.  I have sex on a regular basis, so don’t bother asking me if I noticed any particularly clever sight gags, okay?  However, what I did notice is that this was an adaptation of source material that was, presumably, changed.  And who am I, after all, to complain that Christopher Nolan robbing Two-Face of any sort of worthwhile narrative contribution is in any way different?  We’re all nerds who love what we love, and hate to see what we love changed.

*The most egregious example is the constant inversion of Lucy and Mina, which often occurs alongside decisions to create paternal ties to Seward and Van Helsing, or the outright removal of Jonathan Harker by killing the character at Castle Dracula.  The second and third examples make a certain amount of sense insofar as tidying the narrative, but switching the ladies’ names is a decision made for decision-making’s sake alone.

**Let me give you an indication of how bad my last theatrical experience with this franchise was.  At the concession stand, I got myself a twelve dollar Slurpee with a bubble top.  You know what I’m talking about: one of those plastic lids that forms a dome with a hole in the top for the straw…?  So about half an hour into the movie, I’ve consumed enough of my Slurpee that the straw — which was short — had sunk down into the cup and gotten stuck under the lid.  I had two choices: pop the top off and drink without a lid; or try (vainly) to cram two fingers into the tiny straw hole in an attempt to 1) grasp the straw, 2) lift the straw through the hole, and 3) remove my fingers without dropping the straw back into the cup.  The former would only take a moment; the latter was virtually impossible.  I opted for the latter.  When my then-girlfriend noticed what I was doing, she tried to snatch the cup away from me and remove the lid, to which I protested that it was keeping me amused.  RESIDENT EVIL: APOCALYPSE was that bad.