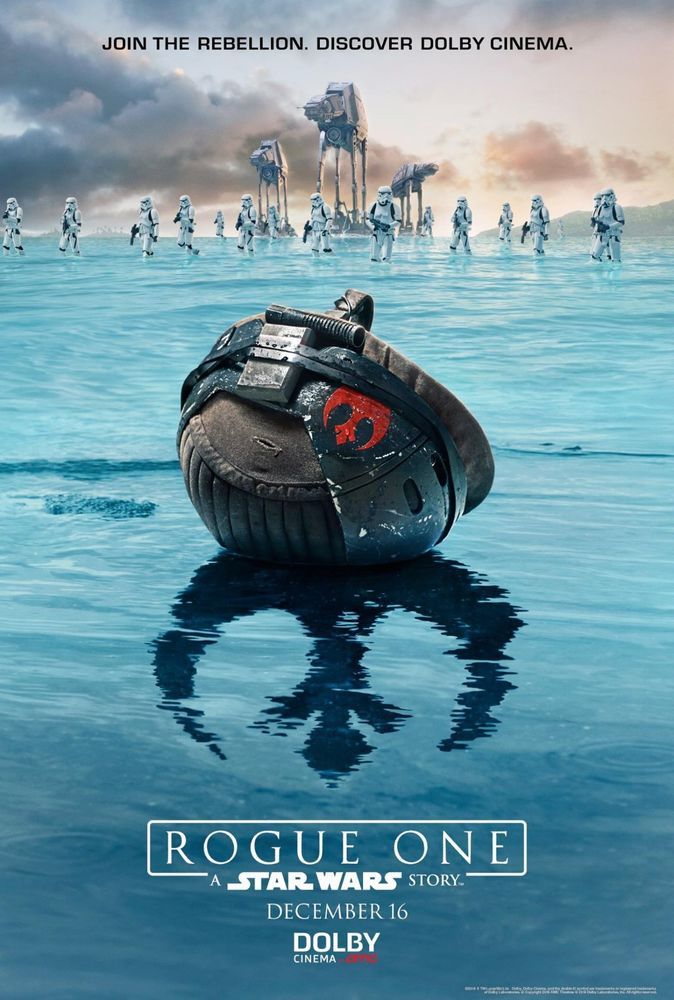 "It is a period of civil war.  Rebel spaceships, striking from a hidden base, have won their first victory against the evil Galactic Empire.

“During the battle, Rebel spies managed to steal secret plans to the Empire's ultimate weapon, the DEATH STAR, an armored space station with enough power to destroy an entire planet.

“Pursued by the Empire's sinister agents, Princess Leia races home aboard her starship, custodian of the stolen plans that can save her people and restore freedom to the galaxy...."

No sooner had the Star Wars franchise gotten back on track with THE FORCE AWAKENS — a film even whose detractors grudgingly accepted as a safe but necessary course correction for a franchise stigmatized by the word “prequel” — the new Lucasfilm handlers at Disney announced the release date for ROGUE ONE…which, by the way, happens to be a prequel.

It felt a little soon for this.  Since Disney’s 2012 acquisition of Lucasfilm, the focus had been on moving the franchise forward while keeping one foot firmly planted in the STAR WARS of 1977 – 1983.  As such, it’s natural that if the idea was to do a “flashback episode,” it would be one taking place during the Original Trilogy.  Thus, with ROGUE ONE, we get the story of the heroic Rebels who stole the plans for the first Death Star and transmitted them to Princess Leia moments before the start of STAR WARS.  There’s a lot of familiar iconography on display: classic Stormtrooper design, Imperial Walkers, Star Destroyers, and the Death Star itself.  The trailers and previews also promised Alliance honcho Mon Mothma (who smiles in this one, since No Dead Bothans yet), as well as tantalizing glimpses of a Darth Vader who doesn’t whine about sand anymore.

But like the fall of Anakin Skywalker and rise of the Empire, is this a story we really needed?  It’s one thing to flesh out the rough sketches, but how Leia received the data tapes never felt like something demanding expansion.  Part of what makes the beginning of each STAR WARS movie so fun is that we start off in media res — in the thick of the action — with the text scroll telling us what just happened prior to the opening scene.  The impression of depth and implied history is always more effective than the details themselves.

After all, who cares how the Rebels obtained the schematics?  The plans themselves aren’t even that important, story-wise; they’re a McGuffin, Hitchcock’s term for a plot device that spurs action.  They don’t really contribute much to the narrative of STAR WARS — by the time they’re safely delivered to Yavin IV, it’s barely a minute before the useful data is obtained, after which they’re never mentioned again.  The true purpose of the stolen data tapes is to give Luke Skywalker a reason to leave home and become a Jedi knight; for Han Solo to abandon his selfish tendencies and to become part of a greater cause; and for Princess Leia to become a key and open leader in the Rebellion against the Empire.  The real narrative significance of the Death Star plans is to initiate the greater plot.  Our heroes join forces, battle oppression, and transcend their former selves.

This doesn’t mean there isn’t a worthwhile story to be found in ROGUE ONE.  There’s definitely material to be mined.  By that same token, between the redundant nature of the proposed storyline and the fact that, like all prequels, it becomes difficult to create tension when the fate of the characters is already known (SPOILER ALERT: Princess Leia gets the plans at the end), ROGUE ONE felt like unnecessary backtracking at best, and crass corporate sausage-making at worst.  Adding further fuel to the fire was the news that director Gareth Edwards, whose 2014 reimagining of the GODZILLA series had succeeded as spectacle entertainment and spectacle entertainment only, had been ordered by Lucasfilm to oversee massive reshoots (forty percent of the film according to reports).

But Joe Moviegoer doesn’t care about any of this, does he?  Joe Moviegoer just wants a fun STAR WARS movie.  He’s not interested in the mechanics of storytelling or inter-industry soap operas.  Yet for average audiences, there was an entirely separate issue: what was ROGUE ONE, anyway?  Was it a sequel to THE FORCE AWAKENS?  Did they recast the British girl in the lead role, because she kind of looks and sounds the same, but also kind of different?  And wait, there’s another Death Star?  Where’s Luke?  Does Darth Vader come back to life, because I think I saw him in the commercial?  What is this movie…?  It wasn’t hard to understand why the film was scrutinized to the most microscopic detail, and why anything less than a Sure Thing wasn’t good enough for a franchise that had seemingly lost its way once before and couldn’t be allowed to a second time.

Fortunately, in spite of studio meddling (or perhaps because of it), ROGUE ONE works.  It succeeds as an outgrowth of the STAR WARS franchise, and manages to tell a story with twists and surprises despite an ending that’s been previously established.  It’s also decidedly darker than any film in the series to date, being both a war film and a heist movie in one, with lightsabers and the Force taking a backseat to violent death and mass destruction.  The film sometimes teeters close to an uncomfortable edge, where we’re asked to cheer for Rebels performing acts of terrorism on what they consider a corrupt political machine.  A more cynical viewer might squirm ever so slightly when the musical score directs us to applaud.  Make no mistake: this is less FLASH GORDON than a SAVING PRIVATE RYAN injected with occasional 9-11 imagery, and the first STAR WARS where the kids might ask some hard questions on the drive home.

Apart from the two scenes featuring Darth Vader – the first containing a double-pun that may cause you to accidentally sprain your eyes from rolling them too hard; the second featuring the character in a moment so defining that it’s already achieved legendary status – the most fiercely debated aspect of ROGUE ONE was the return of Grand Moff Tarkin.  Via the Lazarus Pit of Industrial Light & Magic’s digital artists, Lucasfilm (controversially) resurrected Peter Cushing to startling effect.  Tarkin sometimes walks uncomfortably close to the lip of the uncanny valley, particularly when sharing scenes with human actors; but while the technology may not yet be capable of creating one hundred-percent photorealistic characters — and may in fact date ROGUE ONE as surely as the similarly-animated Jar Jar Binks dates THE PHANTOM MENACE — the ongoing development of such techniques should be encouraged and further refined with each subsequent experimentation (though this raises as many ethical questions as it opens doors for storytellers).

OR…WE MAY GET SOMETHING FAR, FAR WORSE.

What am I talking about?  I am referring to my fear that ROGUE ONE would involve inserting new characters into 1977 footage, or outtakes into the 2016 film.

When FOREST GUMP -- that loathsome little Robert Zemeckis movie that everyone inexplicably seems to love but me -- was released in 1994, one of the chief talking points was the way in which it was now possible to drop newly-shot actors into archival footage.  You had Tom Hanks interacting with Kennedy, for example, and it was the first time something like this could be achieved without the use of lookalike actors.  We’re now quite a bit removed from that film, and technology has advanced dramatically; the fact that Tarkin is a supporting lead in ROGUE ONE exemplifies this fact.  With that in mind, and given the concept of this particular prequel, here’s what I was predicting throughout 2016, and what I began to seriously dread as I sat there at the press screening, watching a zombie Peter Cushing gnashing and rending his villainous dialogue like a bloody, rare steak.  Read it, and imagine it, if you will.  Share my fear with me.

With our team of misfits assembled, the ROGUE ONE characters do their thing: they steal the plans, transmit them to the Tantive IV, and then go on the run.  Sweet.  Awesome.  But it’s not over yet!  Jyn Erso learns from her Dad (and Death Star designer), Galen, that there’s some important, vital piece of information missing from the data tapes, without which the Rebels cannot succeed in destroying the Death Star.  It seems the only way Leia’s pilots can fire those proton torpedoes into the exhaust port is if some hitherto unnoticed lever or switch is flicked in the main reactor core, without which the ventilation shaft remains closed.  Because the Rebel signal is untraceable on Yavin, and because Leia can’t be contacted with this information, Jyn Erso -- a cocky loner at the beginning of the film who now, at the end of Act II, has come to realize that she alone can save the galaxy from the planet-killing weapon of the Empire – chooses to board the Death Star, sneak into the reactor, and activate the MacGuffin.  And look, her team is coming with her, because Friendship!  But they have to hurry, because the clock is ticking: the Rebels fighters are on their way!  CUE SHOTS FROM THE ORIGINAL FILM.

So begins a desperate fight through the Death Star to reach the power source, while familiar pilots are shown, outside, skimming that equally-familiar trench.  Against all odds, Jyn is battling Stormtroopers and Imperial droids, with each member of our ensemble cast falling along the way; until, at last, it’s Jyn Erso, alone and unaided…and all the while, we’re cutting to the X-Wing trench run from the 1977 film, filled with Blast it, Biggs, where are you? and other iconic moments.  Hurry, Jyn, Luke’s about to make his final approach…!

The Force Theme comes up.  Luke switches off his targeting computer.  We cross-cut to Jyn, as she simultaneously achieves her objective – and oh no, she has to face down her father/Mendhelson/whomever!  BOSS FIGHT.  It’s sweaty and bloody, with lots of high shutter speed and rapid editing.  Now she’s panting as she’s dragging herself along the floor, her leg broken, near to death, as the equally wounded villain is staggering behind, trying to stop her.  Will she make it???

Then, the literal moment Luke fires, she flips the switch, and closes her eyes as the villain screams Noooooooo --

BOOM.  The Death Star explodes.  “Great shot, kid, that was one in a million!”  Remembering that the Force will be with him always, Luke and company head back to Yavin for victory medals.  But we the audience now have a new perspective on these events.  ROGUE ONE has taught us that even victory is bittersweet, as the tale of unsung hero Jyn Erso will forever remind us.  We will never watch STAR WARS the same way again.

I was shocked they didn’t do it.  But they will.  Someday, they will.  And once they do, we can never come back again.  Once we go there, nothing’s sacred.  And that’s worse than any SPECIAL EDITION I can imagine.

NOTE:  Parts of this article originally appeared in my 2016 review of ROGUE ONE for The Dagger, which is ironic, given my predictions for ROGUE ONE’s climax.