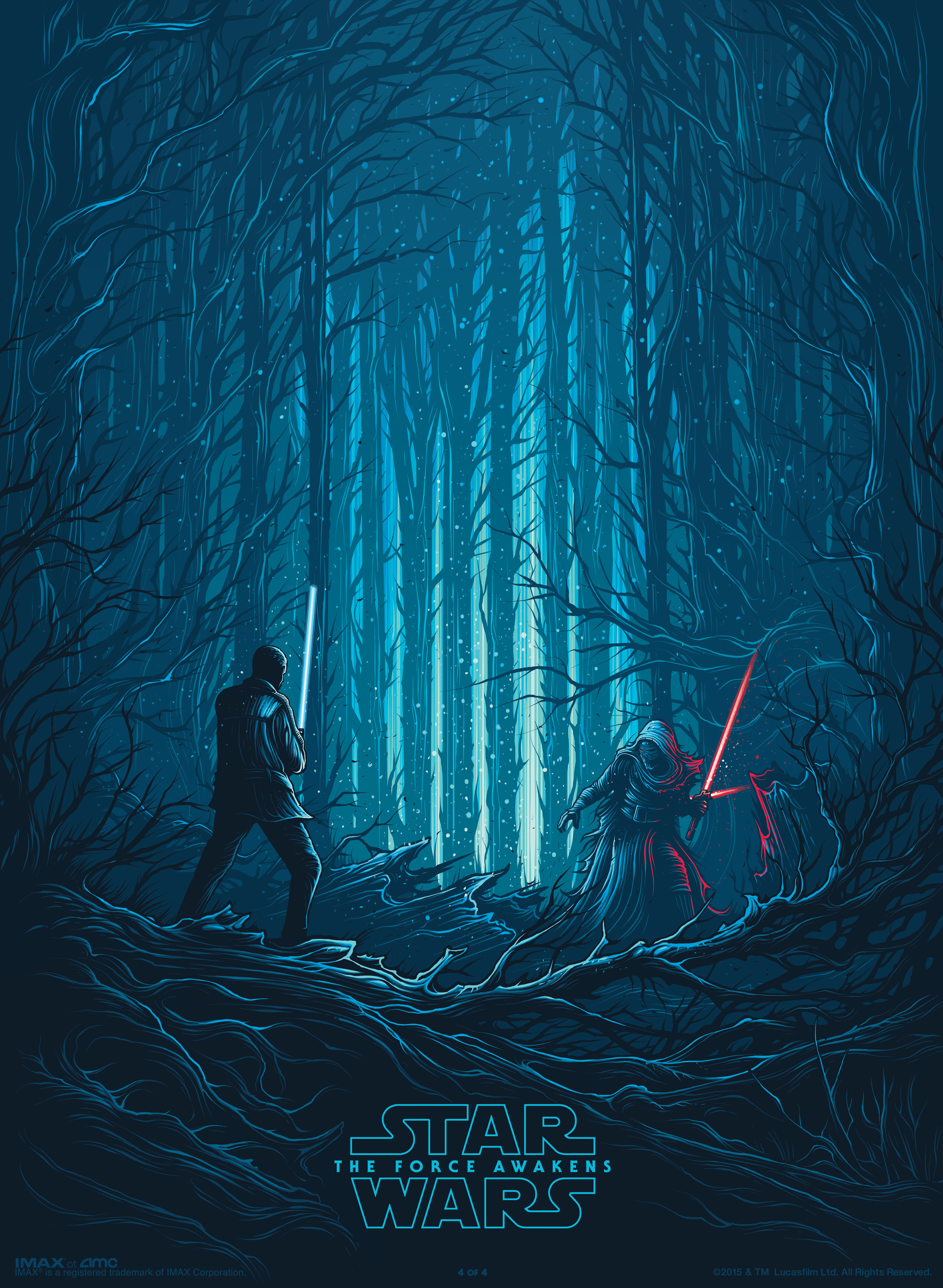 In many ways, we weren’t playing fair with THE FORCE AWAKENS.  We expected so much of it.  It had to satisfy the fans who were happy with the state of STAR WARS, post-Prequels; it had to lure disenfranchised Geeks like myself back into the fold; it had to serve as both a continuation as well as a jumping-off point for both the next generation of characters, as well as the new audience just discovering this universe for the first time; and it also needed to take a tired, whipped franchise and inject new life into it, while simultaneously recapturing the magic of a bygone era…all while laying the foundation for an endless series of sequels, prequels, sidequels, and remakequels.  It had to be Art, but it also had to be Commerce.  It had to be Familiar, but it also had to be New.  It had to have cutting edge special effects, but it also had to have retro models, sets, and creature costumes.  It had to be everything you wanted it to be while also being everything you didn’t know you wanted until you got it.

So honestly, how could this film possibly deliver…?  It simply had too many boxes to check off.  With THE PHANTOM MENACE, people were all waving their arms: IT’S GONNA BE GUD!  With THE FORCE AWAKENS, people had their arms crossed, saying:  IT BETTER BE GUD.  The fact that George Lucas was no longer involved, coupled with the love-it-or-hate-it assignment of directorial duties to J.J. Abrams, was both a reason to celebrate and a reason to be wary.  It’s STAR WARS, after all -- people are still in therapy over this shit.

Considering everything EPISODE VII had to accomplish, there were two things, and two things only, that were, for me, non-negotiable.

1.  EVASION AND INFILTRATION.  As stated during my ATTACK OF THE CLONES write-up, the first four STAR WARS films were about characters either running away from the Bad Guys, or trying to sneak into the Bad Guys’ house.  The character elements were hung on this framework like lights on a Christmas tree.  That’s the formula for both STAR WARS and INDIANA JONES:  run run run run run, fast.  The second and third prequels were about slow walking or sitting and talking.  We needed Coca-Cola Classic, posthaste.

2.  CHARACTERS WE CARE ABOUT.  Any strong association you had for Prequel characters was derived from their significance to the Original Trilogy.  Nobody gave a shit about Dexter Jettster or Sio Bibble or Ki-Adi Mundi.  No one cried when Padme died or dressed up as Mace Windu for Halloween.  All of our attachment was to the classic characters, or characters who were in some way significant to future events.  You cared about them because of the other movies, not for the movies they were actually a part of.  The Prequels were coasting on Goodwill, because the previous entries were doing all the heavy lifting for them.

These two points were essential if THE FORCE AWAKENS was going to work on any level whatsoever.  The first is so baffling self-explanatory that it’s amazing that it was somehow forgotten in the Prequel Trilogy.  The second, however, is trickier.  When creating the backstory for the STAR WARS universe, the essential characters were right there: Obi-Wan, Anakin, Yoda, and Palpatine.  No one else really mattered, when it got right down to it, as all paths would lead to a predetermined conclusion.  Now, with THE FORCE AWAKENS, you once again had your essential “givens”: Luke, Han, Leia, C-3P0 and R2-D2.

But there were two ways to go from here.

The first is to do what the so-called “Expanded Universe” (EU*) writers did in books like the THRAWN TRILOGY or in graphic novels like DARK EMPIRE: they aged the characters appropriately, married them off, and gave them kids.  The new characters were ancillary, and even when they grew up to become Jedi or Sith, they were still utilized as prompts to which the established, iconic characters would respond.  I cannot stress this enough.  Anakin Solo or whoever else wasn’t a character designed to carry the torch; he was Danny Cooksey joining the cast of DIFF’RENT STROKES, or Leonardo DiCaprio on GROWING PAINS.  These were kids injected into the story to give the pre-existing characters new things to do.  As such, the universe never widened.  We simply stayed with the same familiar faces, none of whom really changed all that much -- it was just that the supporting cast grew bigger.

The second option was to hit the reset button.  Introduce an entirely new cast, with a few of the original actors returning in parts comparable to Alec Guinness or Peter Cushing in the original STAR WARS.  We’d see Old Luke, Old Han, Old Leia, and have the gang back together to wave at the audience like they were on a parade float; but the story wouldn’t be about them at all -- they’d be characters from previous chapters in a story that was still unfolding.  Their legacy would go on, but they, like Obi-Wan before them, were not long for a world in which they no longer belonged.  STAR WARS is about a galaxy far, far away, and it takes more than the Skywalker family to fill it.

It’s a dangerous proposition.  The whole reason we got the never-ending Further and Ongoing and Continuing Adventures of Luke Skywalker in the EU was because that’s what people wanted.  They wanted Luke.  They wanted Han and Chewie.  How can you tell stories taking place after RETURN OF THE JEDI and not show us what happened to the heroes we were all so invested in?  But by that same token, we already saw what happened when we got Indiana Jones back: it was like watching Fat Elvis stumbling through karate moves on a Vegas stage.  No one wants Fat Elvis, especially with a lightsaber.

And that’s where you run into the biggest problem: who wants new characters hogging up screen time when and if we get the chance to catch up with what the old ones have been doing these last three decades?  There’s a reason people didn’t respond to THE BRADYS or THE NEW LEAVE IT TO BEAVER, where the cast is all grown up with kids of their own who fit the same familiar archetypes from the original show.**  Nobody likes Eddie Haskell’s kid; they like Eddie Haskell.  Pop culture iconography is lightning in a bottle: it can’t be cloned by some CGI asshole with a long neck on a water planet.

With all that said, we know what Disney, Lucasfilm, Abrams, and screenwriter Larry Kasdan opted to do: they went with the riskier but potentially more satisfying option.  THE FORCE AWAKENS was designed to be a Passing of the Torch film, one in which our old favorites showed up, and more or less willingly surrendered the franchise to a new, younger group of characters (and by extension, a newer, younger group of actors, filmmakers, and yes, audience).  And in that respect -- launching a new generation whose adventures we were now supposed to follow -- they were completely and one hundred percent successful.

The worst case scenario was that the Rey, Finn, Poe, BB-8, and all the rest, would be forgettable.  Had we been watching them run around on screen, all the while gritting our teeth and waiting for Han to show up, then the film would be an undeniable failure.  That was my concern.  It was necessary for us all to go into this wanting to see Luke, and to walk out wanting more of the new cast and their ongoing adventures.

If J.J. Abrams has one outstanding quality as a director, it’s his talent for casting the right people in the right roles.  His reboot of the STAR TREK franchise was equally risky, given that it required finding new actors to embody classic characters, and to balance imitation with genuine performance.  STAR TREK INTO DARKNESS gets a pass despite a bungled script and failure to connect the most obvious dots*** if only because we’re having a good time with people we enjoy seeing.  It’s like going to a really shitty party with your friends; as long as they’re there with you, the time goes by.  You might bitch about how lame it was later, but in the moment, it’s all good.  Pass the drinks.

The same talent was applied to THE FORCE AWAKENS, in which new and iconic characters had to be created from scratch -- a far greater challenge.  The kids on the playground had to be considered, as well as their future Halloween costumes and the action figures they asked Santa to deliver.  One could argue that it’s very calculated galaxy-populating: we get a girl, a black guy, a Guatemalan, an Emo-Goth, a redhead, and a bunch of old people.  There’s literally a flavor for everyone.  STAR WARS movies are family events: you need to be able to sit everyone down in the theater together and make it fun for the whole group.  In THE FORCE AWAKENS, there’s an avatar for everyone, but what makes it successful is that it only feels contrived when you break it down with a cold, corporate eye.

Calculated or not, they’re cool.  They have wonderful chemistry.  The relationships remind us of the ones shared by Luke, Han and Leia, in that the interplay is both authentic and immediate.  And that’s why the film works so well:  I like Rey.  I like Finn, and Poe, and Kylo Ren.  I like BB-8.  They somehow do the impossible and manage to make me forget about the old cast, who are wisely saved and then portioned throughout the film, so that when I get them it’s a bonus rather than a necessity.  I wanted more Han Solo just as much as everyone; but by the end of THE FORCE AWAKENS, I was satisfied that Han’s story was over.  I’d have been satisfied if I’d seen the last of Leia and Threepio, just as I felt that I’d be ready to say goodbye to Luke Skywalker after THE LAST JEDI.  And that’s awesome.  It’s necessary.

You can fault THE FORCE AWAKENS for many things if you choose to.  You can criticize it for remixing elements of the original STAR WARS.  You can roll your eyes at another Death Star.  Hey, you can even create shit to complain about by labeling Rey a “Mary Sue” without knowing what a “Mary Sue” actually is  What you can’t do is accuse the new cast of being unlikeable, or lacking charisma.  You can’t call them “boring.”  They’re not: they’re fun and funny people, juggling the character moments while breathlessly sprinting from set piece to set piece.  We follow them because this is STAR WARS; we want to see the narrow escapes, and to cheer them on as they save the day.  We’re along for the ride.  We want to see them succeed.  They’re our friends.  They’re awesome.

That’s the STAR WARS I wanted.  And I genuinely believed in the groundwork being laid for what would ultimately be called THE LAST JEDI.

***If the film was designed to echo WRATH OF KHAN within a SPACE SEED structure, was this not the perfect time to kill Old Spock, thus removing him as the dangling plot point he now is?  How poignant would it have been for Nimoy’s character to have committed self-sacrifice the same way he did in STAR TREK II, this time knowing it was for good?  I can’t help but imagine a scene where he and Quinto are on either side of glass, their hands up in Vulcan salute, with the older Spock effectively relinquishing the role to his successor.