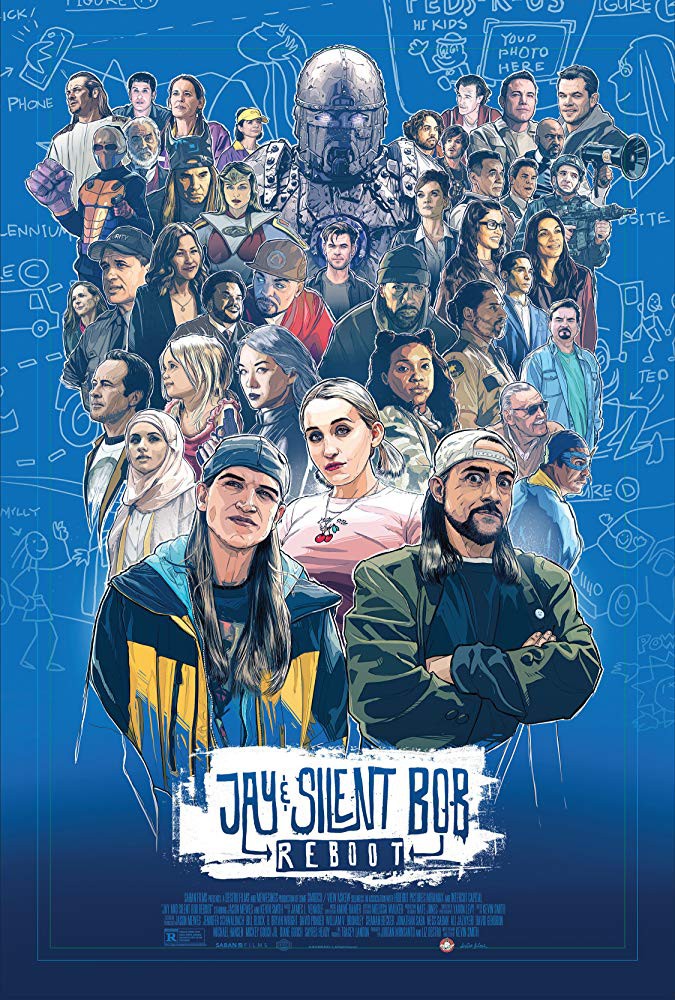 It's not every day that one has the opportunity to talk to a cartoon character, and Jason Mewes didn't disappoint. I fully expected to discuss JAY AND SILENT BOB REBOOT, and found the conversation getting off to a very unexpected start, and ending with a very sincere display of genuine gratitude for the road his career has led him on. It was a fun chat with a funny human being who is as much the guy he plays onscreen as he isn't.

ekm: I’m doing well! I want to let you know it’s truly an honor to interview you on behalf of MoviePoopShoot.com.

ekm: I mean, let’s confirm this: Ain’t It Cool News is MoviePoopShoot.com, right?

ekm: Awesome. So look, I know you’re a busy man. You’ve got a lot of interviews, so I’m gonna throw a few questions of my own your way. Is Harley Quinn with you? (NOTE: Harley was originally scheduled to be a part of this interview - ekm.)

JM: No, after this, I gotta go grocery shopping for the house. We take turns, me and the wife. She had to go do things for the kids’ school and I’m out grocery shopping and don’t want to get distracted. I was gonna get [groceries] when I first got on the phone, but then I realized all the stuff would just sit in the car for an hour and a half and I figured I’d just wait; but I’m gonna go home and stream. I’ve been streaming on Twitch, and that’s been so much fun, man. I really enjoy it so much.

ekm: What is grocery shopping like for Jay of Jay and Silent Bob?

JM: (laughs) I follow a list. Sometimes I overdo it and, like, think about things I think we need that we’ve gotten in the past, and I’ll overdo it sometimes and my wife gets all bummed, but you know: it’s just me following a list and getting broccoli and asparagus and chicken, and of course I’ve got to get my snacks. I’m obsessed with these white cheddar chips they have, oh my goodness. They’re so good.

ekm: Dude, that’s so mundane. I was expecting something a lot crazier from you than this.

ekm: So, let me ask you a couple of questions about the REBOOT movie. Taking a look at the entire JAY AND SILENT BOB franchise, going all the way back to CLERKS, it’s like watching the construction of an indie-level mini-empire. What’s that journey been like for you, starting on this ultra-low-budget production, and then moving on to larger-scale films with more support?

JM: I didn’t plan on doing it. When I was doing CLERKS, I was roofing, and we’d work at nighttime, and afterwards I went back to my normal job roofing, and that’s what I’d do. Then Kevin was like, “The movie got bought, and we’re gonna be doing another movie called MALLRATS, and we’re gonna go to Minnesota.” But even after that, by the time I got home from MALLRATS, my friends are like, “Dude, you made two movies!” So after MALLRATS, I went to Vancouver to make an indie movie with this guy I met on set (DRAWING FLIES). So I’d made three movies. But remember, CLERKS we did all as friends and we didn’t get paid. When Kevin sold the movie, he threw everybody some coin. MALLRATS was scale for a first-time actor, so I think after taxes, I got like, eight grand. Then after [DRAWING FLIES] I made, like, another eight grand after taxes. So I’m not sure of exact numbers, but let’s say after three movies I made maybe a total of fifteen thousand dollars, and people are like, “Oh my God, bro, how many houses are you gonna buy? How many cars are you gonna buy?” And I’m like, “Bro, I gotta go deliver pizza for my buddy.” So my point is, it’s been so surreal because I made CLERKS and MALLRATS and I didn’t get offered anything beyond that, and then I got lucky and got offered [DRAWING FLIES] in Vancouver; and then Kevin did the MALLRATS premiere and we did CHASING AMY, which I was only in one scene; but all the way up to DOGMA, I worked delivering pizza and construction and roofing, so it’s all been super-super surreal. It’s interesting, all the people I’ve met over the years, and moving to L.A., which I had literally only seen in BEVERLY HILLS COP and 90210, so I’d only just seen the beaches and palm trees and Mann’s Chinese Theater and Hollywood premieres. So I remember coming here and landing at the airport and being like: This is paradise. This is crazy. I still have those moments where Kevin and I will be somewhere, and we’re hanging out at a party, and across from us is Robert Downey, Jr., and so-and-so and so-and-so. It still blows me away, man. That’s how it’s really been since CLERKS. And getting to travel and do my own show, JAY MEWES & HIS A-MEWES-ING STORIES, and they’re not huge venues, but I’ve had a few venues where we’ve sold out three shows, and they’re, like, four hundred seats. Almost twelve hundred people, or whatever. And I’m like, Twelve hundred people are coming out to watch me stand up and talk about my Brown Eye, you know? So it still blows me away, bro. I feel very grateful, and very lucky.

ekm: Along those lines, you’re the mouthpiece for Jay and Silent Bob. Kevin is obviously tuned in to Pop Culture minutiae; he’s part of the machine that produces the comic books and films he’s satirizing [in JAY AND SILENT BOB REBOOT]. Is that a passion you share? Because you’re the guy voicing all that commentary.

ekm: — voicing all the commentary on the remakes, reboots, trends, whatever.

JM: No, not necessarily, man. I think Kevin is way more in tune with whatever. My wife and Kevin make fun of me all the time because I won’t even know that something’s going on. I’m like, “Oh my God, did you hear that so-and-so got arrested?” And they’re like, “Dude, that happened a week ago.” Even with the reboots and remakes, for me, it doesn’t bother me so much. When [movie studios] make a new movie, I’m like, “That’s cool, I wanna check it out.” I don’t get too involved with, “Oh, that stinks, they’re gonna ruin it!” I don’t think that way, because for me, if I’m entertained, I’m entertained. If I’m not entertained, I might not be digging the movie so much, but to me, it’s not like they ruined everything by remaking it. This movie or that movie. So no, I wouldn’t say it’s me speaking what I feel, necessarily. Kevin’s way more into really feeling about…There’s videos where he’s crying about a movie. Don’t get me wrong, I’m not saying I don’t cry over movies, but Kevin cries for a whole different reason. So no, I’m the mouthpiece, but…I really find him to be clever. He’s super clever at taking things from the old movies and putting them into the new movies and really making them work. Making them come full circle. And it’s so amazing: Kevin’s daughter is in the opening scene of JAY AND SILENT BOB STRIKE BACK, and now she’s my daughter in the movie, playing the lead in this movie and playing my daughter, and then my [real-life] daughter’s in the movie. So all that stuff: I find Kevin to be super-witty and clever about it all.

ekm: I thought it was really cool that Ben Affleck had the scene [in JAY AND SILENT BOB REBOOT] with your daughter.

ekm: I was also really impressed that Affleck was in this movie and having a good sense of humor despite the fact that REBOOT is sort of making fun of BATMAN v SUPERMAN and Affleck’s take on Batman — or, at least, Affleck participating in that reboot of that particular universe.

JM: Yeah, he was great, man. It was really awesome when we found out that he was able to come and be a part of the movie. It’s funny because Kevin had wrote so much dialogue for him. Speeches. Not even, like, back-and-forth dialogue where you can take a cue from someone and cut if you mess up, and turn the camera around start over. At one point, I think one page was literally from top to bottom, one page-long monologue; and when he got there, Kevin was like, “Do you wanna take some time and go over it?” And [Affleck] was like, “No, let’s do the blocking and stuff.” And Kevin was like, “Do you need a script?” And [Affleck] was like, “No, no, let’s just go through it.” And no lie: he just fucking banged through it. I was blown away. Kevin was blown away. Because, again, Kevin was excited that he was coming to play and be part of the movie, but I also I think — and a small part of me thought this, too — that he’d be so busy that maybe he didn’t have time to look over the script, and he was gonna come and say, “Let’s cut this a little shorter, let’s do this…” But he came full-ready to go and blew it out of the water. It was awesome. And he was patient with my kid. He was sitting there, and she goes to try and hug him, and she’s a little weary because she doesn’t know him, but…it was awesome. Super awesome.

ekm: Well, I don’t want to hold you up any more, but I want to let you know your recovery story has helped a lot of people. The podcast is fantastic. MADNESS IN THE METHOD was also awesome, and I loved you in FREDDY VS. JASON.

JM: (laughs cynically) Thank you, bro. I appreciate it.

JM: The podcast for me was such a huge help. For me, it was going to meetings all the time and talking about it, and I didn’t expect people to be like, “Hey, I’ve been listening to the podcast and it got me through one more day and one more day, and now I’m two years sober.” I didn’t even expect that. I thought maybe it would help me to talk about myself, and help me stay sober, so that was just amazing. For you to see that and recognize that — thank you, brother.

ekm: My pleasure. I wish you the best of luck with the movie release, and with grocery shopping.