Disappointment is how HALLOWEEN ENDS! 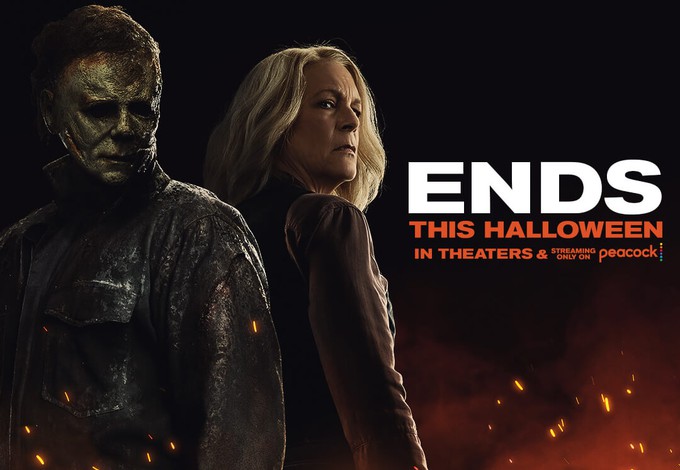 Hello, Horror fans and welcome once again to the House of Macleod’s movie review corner! Today we take a look at David Gordon Green’s Halloween Ends (1h 51m,18,2022) starring Jamie Lee Curtis, Andi Matichak, James Jude Courtney, Will Patton, Rohan Campbell, and Kyle Richards. Written by Brad Logan, Chris Bernier, Danny McBride and David Gordon Green, Halloween Ends is the trilogy capper to the revitalised franchise which began with Halloween in 2018 and continued in Halloween Kills in 2021. The movie opens with a teenage Babysitter named Corey who has the arduous job of babysitting a spoilt rich kid called Jeremy. During a game of hide and seek, douchbag Jeremy locks Corey in an attic at the top of some very tall stairs. Trying to get out, Corey gives the door a swift kick sending little Jeremy accidentally tumbling over the railings. He hits the ground like a dart just as his parents walk through the door. Oops. Corey then has to suck it up and live with being called a child killer and all sorts for the next three years. Bummer.

Speaking of time jumps, it's been four years since the events of Halloween Kills and the residents of Haddonfield still haven’t built a bridge and gotten over it. Myers on the other hand somehow disappeared after laying the smackdown on that angry mob from the end of Kills and now he’s hanging out in a sewer, going full-on ninja turtle, but more on that later. His nemesis and hero of these tales, however, Laurie Strode is trying her best to live her best life with her granddaughter Allyson. She’s also writing her memoirs, called “Stalkers, Saviours, and Saw-Wen”, this is a nice little easter egg in itself as “Saw-Wen” is the Celtic festival that eventually became the Halloween that we know and love. The more you know... Anyway Corey the babysitter from the start of the movie has had it tough, he’s been taking some shit from some local bullies and in an altercation with them, gets injured. This is where he meets Laurie and eventually Allyson whom he develops a relationship. Now, being the nice person that Allyson inherently is, she invites Corey to a Halloween party where he bumps inexplicably into Jeremy's mother who is attending this party for some reason. Did she go there specifically to give Corey some shit for offing her son Javelin style or was she just there for the two-for-one schnapps? Who knows, I'm guessing not the writers. Anyway, Corey leaves the party because, you know, the stress and heads home only to bump into the kids that have been bullying him. This scene bothered me quite a bit because well, Corey took it like a thing that meows. He gets thrown off of a bridge and if that wasn’t enough to ruin his day, he gets dragged into the sewer that Michael has been chilling out in. Nearly losing his life to the famed masked killer, Michael however senses that this boy is different and lets him go leading to a team-up of lacklustre proportions and a final battle that has to be seen to be disappointed by.

I could go on and on about the side plot about Corey and Allyson’s romance and how he turns to the dark side and becomes tag team partners with the most feared villain Haddonfield has ever seen but to be honest, it bored the hell out of me. It reminded me of Joker if Joker wasn’t done very well. I sat down to Halloween Ends ready for the finale to top all finales. The epic conclusion to a forty-year battle between Strode and Myers only for her to beat him down in roughly five to ten minutes with minimal effort. Instead, we are treated to Michael living in a sewer. How? that's the first thing I thought. How? Was he eating rats? Does his rage sustain him? To say this was total mistreatment of a legendary horror icon is a massive understatement.

I expected far more from Halloween Ends. What was with the time jump? Why not just continue where the last movie left off? They had everything at the end of Kills, the townspeople had reached a state of paranoia that was making them crazy, and Laurie had just lost her daughter giving her rage and motivation, it made no sense from a storytelling point of view to jump forward and what bugs me, even more, is that it took FOUR writers to make this awful choice! Why make Myers himself a side character? He’s barely in the movie for god's sake and when he is in the movie, his kills are diluted and so so. In fact, all of the kills are. Well, I say “all” but that DJ kill was pretty cool. I guess they “Shocked” that jock hahaha…Sorry, I’ll let myself out...

See, my big problem here is that Halloween Ends isn’t a bad movie, it's just a really disappointing movie. This would have been far better suited as a two-parter, really building the tension between Laurie, Corey, Allyson and Michael leading to an epic conclusion, but it felt phoned in. It felt like the paper that you hand to your teacher that you did but you put in the bare minimum effort into. Like you had a great idea, to begin with, but you lost your steam when you realised you have to fit all of this story into a one-hour fifty-one runtime. My dear readers, I'm not saying it's bad, I'm just saying it's not what I wanted. But then maybe it is, maybe it would have been better fleshed out over two movies. Who knows?

Halloween Ends is in cinemas around the world now and if you happen to be lucky enough to live in a region that has Peacock premium you can stream it there too. Let us know what you thought in the talkbacks, did you love it? Did you hate it? or like me, were you just bummed out by it?

Official House of Macleod score: 7/10. "Look how they massacred my boy"