Barbarella here with some news.  If you’ve been waiting your whole life for a science-fiction/martial-arts movie, the wait is over; JIU JITSU is here!  Dimitri Logothetis mashed the two genres into a super-fun film, starring Alain Moussi (KICKBOXER: RETALIATION), Tony Jaa (ONG BAK: MUAY THAI WARRIOR), JuJu Chan (WU ASSASSINS), and the legendary martial artist, Nicolas Cage.  Wait, what?  Don’t worry. Nicolas Cage may not be a Jiu-Jitsu master, but he definitely has a black belt in crazy, and sometimes, that’s just what a film needs.

As it turns out, Jiu Jitsu is just what I need right now, too.  Y’all know I love a good martial arts film.  Admittedly, I even love a few not-so-good ones, as well. There are those people whose movies I’ll always rush to watch, folks like Donnie Yen, Iko Uwais, and Tony Jaa, even though I’m still someone mad at him for ONG BAK 3.  I mean, meditation is valuable, but I don’t want to see the action star of an action movie meditate through most of it.  I want to see some fights.  I’m teaching myself self-defense vicariously, and I can’t absorb any self-defense moves if I’m not seeing any.  Despite that disappointment, as soon as I saw Tony Jaa’s name on JIU JITSU, I couldn’t wait to get my eyes on it.  Of course, Alain Moussi on this definitely upped my interest factor, as he is an actual sixth-degree Jiu Jitsu master.    I had the opportunity to speak with creator and director Dimitri Logothetis.  Here’s the interview, slightly edited for clarity.

When you were writing this, did you already have actors in mind for the various roles?

"I don't really pay attention to stuff like that, outside of the lead Alain Moussi, who I knew I was going to use again. I just sort of work on character, and I work on what they're supposed to be doing. I wasn't locked into actors until I got the story to where I wanted it to be.

"You can't approach a martial arts film without authentic martial artists. I was fortunate enough to have Alain come back into the fold to play the lead. And then, oh, my God, I scored Tony Jaa. I've been trying to get Tony Jaa all the way back to the first remake that I did of KICKBOXER. I got Tony Jaa. I got JuJu Chan. And then, of course, the heart of the film, and the one who really sells the story to the audience, is Nic Cage.  I was really fortunate to be able to assemble that kind of cast.” 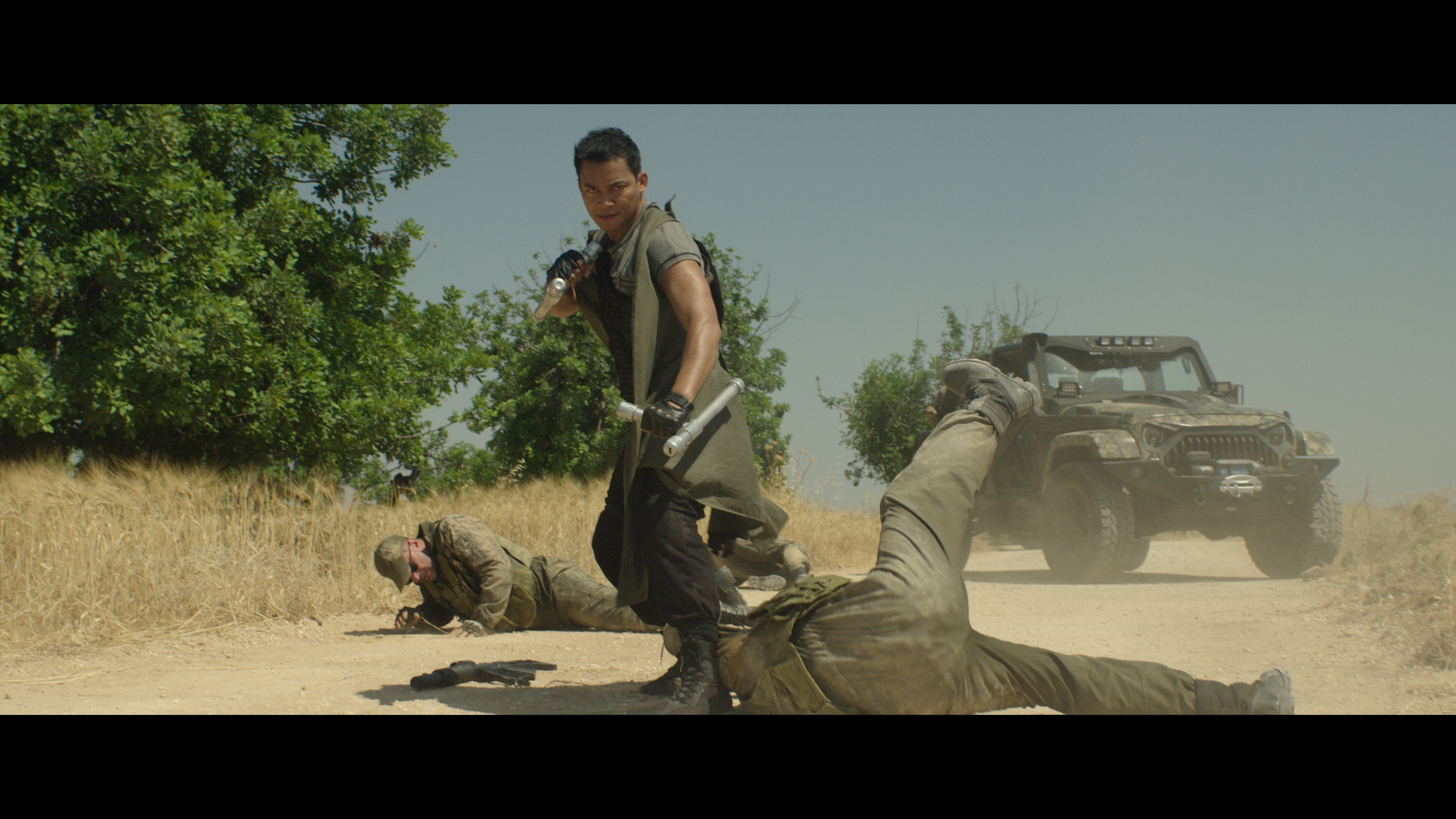 What was Nicolas Cage like on set when the cameras weren’t rolling?

“He's incredible. He's a true consummate artist. He knows about Renaissance art. He embraces music. He really dives into character, and he wants to be as authentic as possible. Then of course he's entertaining. We spent an awful lot of time talking about these movies that nobody else had ever seen, I thought, except for me, because I'm a geek that way. I've seen just about everything that's ever been made. And then I found out that he'd also seen just about everything that’s ever been made, so we had a great time.”

Would you discuss the writing process with James McGrath a little?

“Yeah. Jim and I have been friends for over twenty-five years. We did an awful lot of television shows together. We did independent features together. I was a show runner for some science fiction shows for Warner Bros. and Jim and I had been working together as friends for a long, long time. We have a really good relationship. He knows the kind of stuff that I like to do, and I know the kind of stuff that he likes to do, and so it's really easy. When we did JIU JITSU, I said to him, "Jim, let's write a comic book." And he said, "What?" And I said, "Yeah, let's write a comic book.  If we write a comic book, and I can get somebody to draw it out for us, I'll be able to see the movie." And he said, "Okay." So, we wrote a comic book so that basically I could just see the film evolve. I think once I got the comic book written, I was able to see the script and see the entire story play out.

“It also lent itself to the different styles that everybody had. The one that's a real Jiu-Jitsu master in the whole film is Alain Moussi.  Tony Jaa is obviously Muay Thai, and JuJu comes from China, so you can see that she's got an awful lot of Chinese-influenced martial arts in her background.” 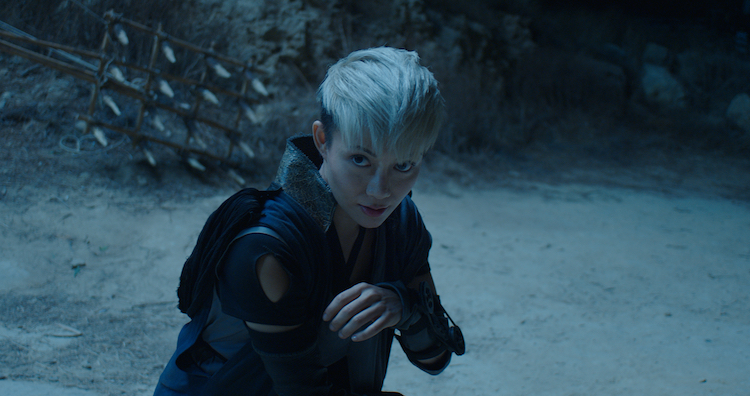 How did you first get interested in martial arts and which styles have you studied?

“Well, I played a lot of football in high school, and when I finished high school, I wanted to continue to do something athletic. I got into Kenpo Karate, which was created by Ed Parker, [who] had trained Bruce Lee. He had also trained Elvis. And then I worked out, at the request of Mr. Parker, with Elvis Presley. I was a teenager at the time.  That was my first style that I got a black belt in. The second style was a style called Tang Soo Do, which is a Korean style.  I was trained by a two-time world champion in that, so those are my two styles that I trained in and got my credentials in.”

Do you have a favorite martial-arts move?

“Yeah, the one where you knock somebody out and you're still standing.”

Do you have a favorite martial-arts film?

“I don't really have a favorite. I mean, I was influenced by a lot of wonderful pictures growing up, obviously Bruce Lee. When I was a martial artist, I think everybody in the schools that I went to, we probably went and saw Bruce Lee in ENTER THE DRAGON nineteen or twenty times. We could probably recite all the dialogue in the film. We were kids, and we had a great time watching him. The storylines were so wild and out there, however, you really noticed the athleticism, and you really noticed how wonderful these guys were.  They were exceptional martial artists and exceptional athletes. I think that was the most stunning thing that probably got me inspired.”

“Well, when I first delivered this script and delivered the concept of science fiction martial arts, everybody thought I was out of my mind. A lot of the distributors that I presented the project to thought it was crazy, and they probably weren't far off, but Highland is the company that ultimately sold the film and picked it up. It was Arianne Fraser who knew that I was out of my mind in a good way. So, I'd say that the fact that I took on science fiction martial arts was one of the craziest things I've ever done.” 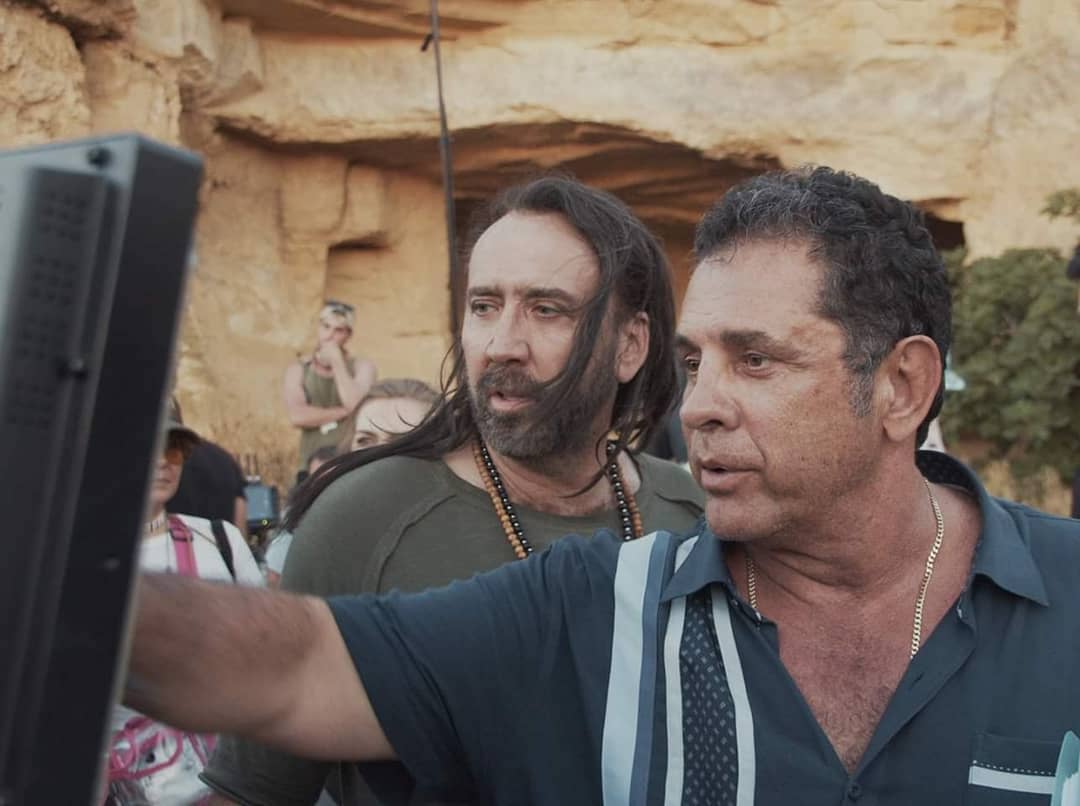 What's the craziest thing you've asked somebody else to do in the name of art?

“Well, if you look at the stuff that Alain Moussi has done in both the KICKBOXER franchise and in this film, I think you'll see that I've pushed the envelope as far as I can so far, although we've got a couple of sequences that we're working on for a couple of future remakes that are going to blow people's minds. We’ve been working those out for the last year.”

Which action sequence required the most rehearsal and why?

“There's really no one action sequence. I designed the action sequences a few months in advance, and I worked with a stunt coordinator in Thailand, and he would actually perform the sequences with his whole stunt team, and he'd pre-edit them. And I'd take a look at them, and then I'd do notes and have conversations about them. By the time we come to set, they've already figured out exactly what they're doing, and I've already shown the sequence in rough-cut form to the director of photography. The martial artists already know exactly what they're going to do with every sequence. The one that was the most complicated to pull off was the one-er sequence where they're running across the top of a wall and being followed by a camera, one single camera. I think I've got five camera handoffs in that sequence. The stunt coordinator and the cameraman had to really sort of do a football handoff to be able to follow the action all the way through.”

What scene are you most proud of in the film?

“I like one-ers and I have a couple of one-ers in this film. I think the audience will really enjoy those, especially when they escape from the army camp, both Tony and Alain. I also really think that the end, one of the end fight sequences, I think that's a pretty wonderful sequence to watch. And I think Nic is excellent, his acting is excellent in it as well.” 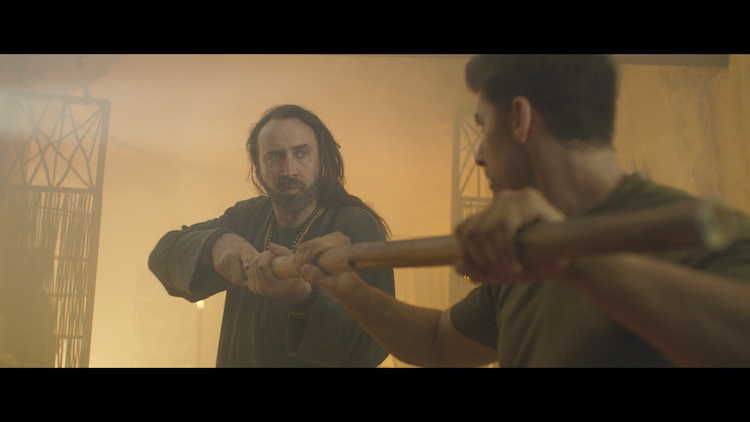 Would you talk a little bit about the aesthetic and the visuals? I mean, were you going for anything specific?

“No. I brought out my same team from Thailand that built all my sets for me in KICKBOXER. I used them and that art director.  The set designer's a wonderful guy, and he really has a wonderful vision, especially since we were supposed to be doing Burma. I think he built a terrific temple for the end sequence. And then, when I was discussing it with my DP, who I worked with for the third time on this, his name is Madrax, I told him that I kind of liked the look of PROMETHEUS.  So, we kind of went for a completely different lighting scheme than we had done before. We've done an awful lot of night stuff, especially near the end. I think we pulled that off. It gives it a kind of a mythic feel to it, which is really what it should be.”

JIU JITSU is available now in Theaters, On Demand and Digital.  I have a ton to do today, so I’m heading out, but I will be back later to share my interview with the film’s lead, Alain Moussi.  Check back later for that.