Matt Mercer and Mike Testin on the Craziness of Making of DEMENTIA PT II! 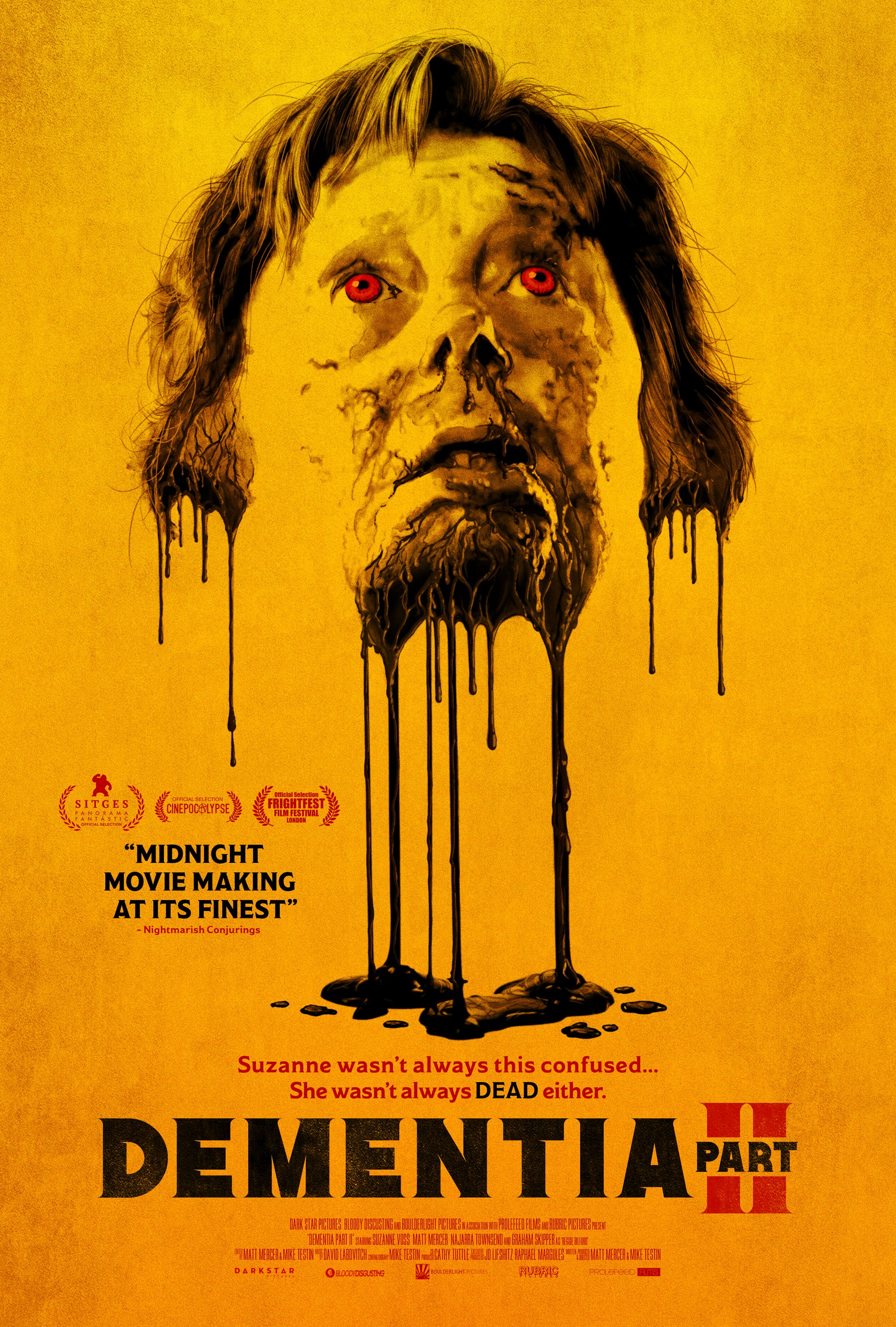 Hey guys, Prometheus here! Ever write, film, and edit a film in five weeks? Well, I recently had the opportunity to chat with Matt Mercer and Mike Testin, the writer/director duo behind horror/comedy DEMENTIA PT II, from Dark Star Pictures and Bloody Disgusting - who did exactly that! The film has been getting a lot of attention on the festival circuit and the story behind the making of it is just crazy. The film stars Matt Mercer, Suzanne Voss, and Najarra Townsend. Check out the trailer, and our awesome conversation below!

JS: Hey guys, how are you doing?

MM - Hey Josh how are you doing?

JS: You have a movie out, DEMENTIA PT II! You co-wrote and directed the film together. How did that come about? I heard there’s quite a story behind it!

MM: I was at a film festival in the U.K. called Fright Fest, which is a great festival, and I ran into a producer that both Mike and I have worked with a bunch named JD Lifshitz. JD had just had a beer with a guy named Josh Goldblum, who runs a film festival, or he used to in Chicago. They devised this wild scheme where Josh reserved a slot at his festival for an unmade film. He asked JD to come up with a project to make in the five weeks leading up to the festival, to fill the slot. So, it was basically a dare. This movie was made on a dare.

JD came to Mike and me to actually make the film, and the only rule was that it had to be called DEMENTIA PT II. Mike had directed the first Dementia, which was a pretty straightforward, psychological, dramatic thriller. So, it made sense for him to direct the sequel.  Because of the speed of the project and how fast we had to make it, Mike asked me if I wanted to make it with him. So, we did everything together and got it done. I think we wrote it in three to five days.

MM: It was fluid. Prepped for about a week and shot it in about five days, and edited in about three weeks. Total it was about five weeks.

JS: That’s quite the turnaround!

MM: Yeah, it’s insane for a feature. It required a very different kind of approach. The prep, everything was obviously pretty sped up.

JS: A lot of pressure.

MM: Yeah. I didn’t want to do it at first and Mike called me and sort of pitched it again to me. Originally, I was just going to act in it. Then Mike talked to me about it and made it sound so enticing. Then it ended up being a great exercise in what you need to really make a film.

MT: It was sort of risk-free.

MM: When everyone knows you made it that fast, there’s nothing to lose. (Laughing.)

JS: Now, what can you tell us - without giving away too much?

MT: It’s generally an unrelated sequel. It has two actors in common, but the storylines, and character-wise, there are no connections. The only connecting element is the aspect of possible dementia…

MM: And the title…

MT: And the title. This thing kind of goes off the rails of what dementia is. It’s got a lot of humor, and gore and all these elements that are not in the first Dementia. We just wanted to have fun with the idea and really take it on a day by basis and kind of make each other laugh, with the cast and the gags. To answer your question, it’s about an ex-con who takes a job as a handyman, and he ends up at this house where this woman is having sort of a… crisis. He’s just kind of dealing with this evolving crisis that keeps pulling him in further.

MM: She misses her husband who recently died, and she’s having issues of her own, and this ever-escalating nightmare for her. My character, Wendell, just wants to keep his parole in order by having a job.

JS: This guy's just trying not to go back to jail.

MM: Exactly. He doesn’t want to go back to jail, that’s it. Every obstacle that gets put in front of him - we wanted to go for the tone of like a Sam Raimi, or Peter Jackson type film, or Roger Corman. We shot it on a Corman schedule, four to five days, one location. Very, very quick.

JS: I’m glad you mentioned that because there were some clear nods to old school cinema and the older zombie films. What would you say your biggest influence was for this film?

MM: We had paid homage to other films, very lightly. There are definitely some references to Friday the 13th pt. 2. The predominant vibe is Dead Alive, AKA Brain Dead and Evil Dead 2.

JS: Now Dementia pt. 1 was full color. What made you guys go with black and white this time around?

MT: For me, with the speed of the production cycle and the postproduction cycle, one element to the black and white was simply the ease of color correction and getting this thing ready for a five-week-later screen debut. Also, I think we both felt that it played into some of the melodramatic elements and the low-budget kind of Corman style things that fed into what DEMENTIA 2 was going to be.

MM: It gives it that Twilight Zone, Corman vibe automatically by being black and white. It has a feel. 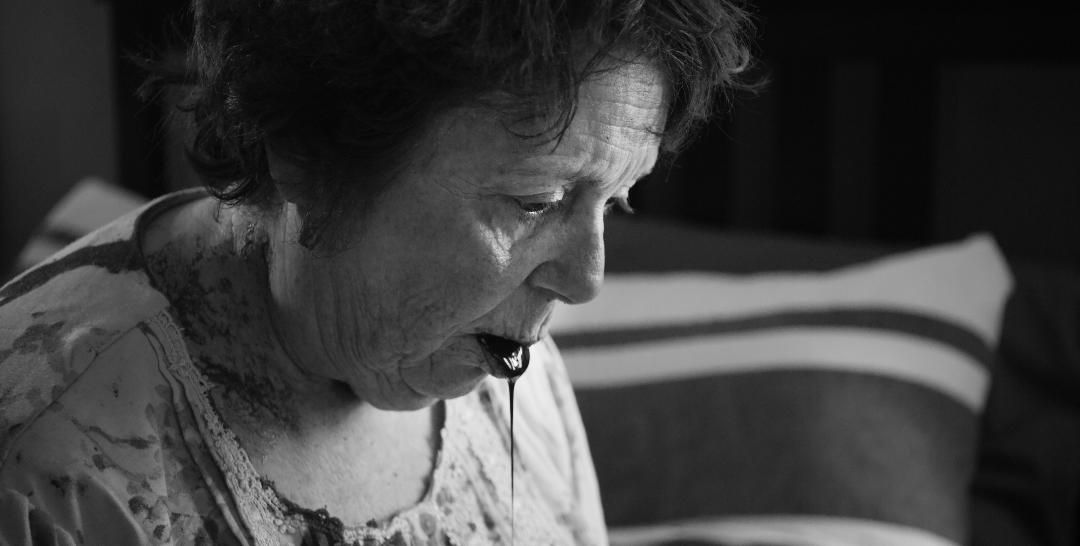 JS: It’s a chilling take on dementia. Where did you guys come up with the idea?

MM: We had three of four ideas. The fact that we had to call it DEMENTIA PT II, we found it funny to have it not have anything to do with the first movie. Then it becomes, what is it if we use that title? We finally settled on, because of budget and time, a single location with this one character. Then it’s sort of like peeling back an onion. The more you get to know her and see the house.

There’s more to her than actual dementia. There’s something else at play here, and it’s much more sinister. As the movie goes on, you’re peeling back those layers, and also the house itself is kind of an onion because my character, Wendell, keeps finding all of these things that suggest things aren’t right. By the time he realizes what’s happening to her, Wendell starts to find extremely distressing things in the house.

JS: The film stars Suzanne Voss, and Najarra Townsend, as well as you Matt. How did they react to doing everything so quickly?

MT: I think the idea that we’re all friends possibly made it easier. It’s a safe space, there’s not really a fail.  It was just, let’s have some fun. When we were going into it, we were going to screen in Chicago for a festival and I don’t think any of us really expected to continue screening… (Laughing.)

MM: We’ve been very surprised by the reaction. Not that we didn’t take it seriously, we tried to do the best work we could, but we thought oh, this will be fun, we’ll get a screening at the Music Box Theatre in Chicago and that will be it - and it kept getting into festivals. People seemed to like it. As Mike said, the reaction from the actors was kind of the same. It was like, let’s have some fun.They all came in very prepared, with great ideas. We’re friends, so it wasn’t hard to get them on board.

JS: I do have one last question for you guys. Any plans for a part three? Maybe going 3D?

MM: I think that would be the way to go! It would have to be Dementia 3D, just shooting hell into the screen.

MM: Thanks, so much!

DEMENTIA PT II will be available on Digital, VOD and DVD on June 1st, from Dark Star Pictures and Bloody Disgusting."