I didn’t realize how much I needed DATING AMBER in my life until I saw it.  David Freyne, who wrote and directed the semi-autobiographical comedy about a closeted gay, first appeared on my radar several years ago when one of his films played at Fantastic Fest.  That film, THE CURED, took place in the aftermath of a zombie apocalypse after the distribution of a cure for the zombie virus.  It proved so much more than your typical zombie fare.  After watching it, I spent days contemplating PTSD, marginalization of certain populations, and other themes addressed in the film.   I enjoyed the unique lens through which David Freyne approached the content, so I couldn’t wait to see his depiction, through a comedic lens, of a queer boy coming of age. 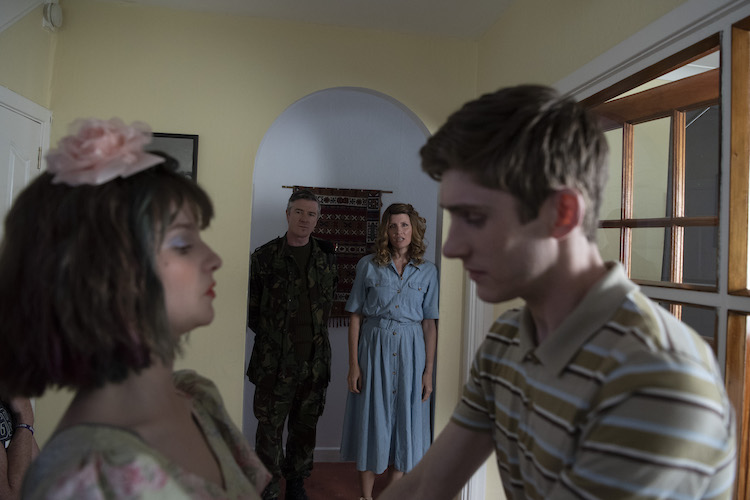 On the opposite end of the spectrum from that film, DATING AMBER proves equally engaging, although in a completely different way.  At times silly, the story beautifully conveys its more serious messages through the well-written story and the wonderful performances.  I eagerly jumped at the opportunity to speak with the Irish filmmaker.  DATING AMBER struck so many emotional chords for me, I experienced a somewhat impassioned symphony.  Becuase I cried so much watching it, I kicked off my questions by asking David if he cried at all while making it.

“I cried at various points, yeah.  I think both through the writing and through the production. I mean, it's quite an autobiographical film. A lot of what Eddie went through is what I went through.  Struggling with coming to terms with who you are is such a difficult thing to experience.

“There were lots of tears from a lot of us. But it was really cathartic to make it, and to write it, because you get to exercise a lot of demons and reevaluate the things you went through. However difficult it was, it was great. It was like a year of therapy.”

How much did the final version differ from your original script, and what were the reasons for the changes that were made?

“What's on the screen is very similar to the script. I think what changed is just the cast made it so much better. I think you can write as many jokes as you want, but you need a very funny actor to deliver that. I never anticipated how lucky we would get with the cast, not just with Fionn [O’Shea] and Lola [Petticrew], who are extraordinary, but with all the secondary actors from the family members to the school yard [kids]. They were all just so brilliant, and they brought jokes where I didn't anticipate there would necessarily be jokes.  That was really the big change.”

I heard that you gave the actors quite a bit of time to rehearse before filming. How much time did they have, and why was that important to provide that?

“It was on and off for about six months. It was quite loose. We would meet up about twice a week and rehearse and get lunch. But for me, this film only succeeded if you bought the chemistry between the two leads, Fionn and Lola.  I didn't anticipate how close they would become. They became really inseparable. They are best friends. They spent lockdown together, they FaceTime about five times a day now. This film, it's platonic, but it is a story of first love. And I think their relationship, it really mirrors that of the script, which was incredible.”

What’s the biggest risk you took on the film?

“The biggest risk, oh, God. I think it’s not the film you often see. When you're talking about coming out stories, or queer stories, I think I grew up seeing them being very dark, very gloomy, and quite depressing. I wanted to show the comedic version of that.  I wanted to show SUPERBAD or LADY BIRD, but with queer leads telling that story. Very often, the notes we would get when we were going out to try and find funding was that it was too funny.  People were hardwired to see a gay film, or gay story, in a certain light, the tragic version.  There were all these notes, "Could the dad be meaner? Could the kids be more aggressive?" And it's like, "Well, no. That's not the film I want to tell, because that's not my experience." Just fighting the notes was the challenge. But I'm really glad we did, because I think we need to start seeing these stories in a different light, and we need to start seeing the queer experience in different ways.”

Of what moment in the film were you most proud?

“I think one of the things I loved the most is around the midpoint of the film when the two leads go to Dublin, and they have their first experience in a gay bar.  Fionn has this one really beautiful, long move with the camera where he goes up and dances with a drag queen on stage.  I really wanted to capture that almost magical essence of what it feels like when you first go to a gay bar, when you're not yet out yourself. There's something just so untouchable and intangible in that experience, but I wanted to capture that. I think it captured that feeling, for a lot of queer people, of what it was like to first enter a gay space.”

The cinematography is exceptional for a comedy.  Would you talk a little bit about how Ruairí O'Brien got involved in the project?

Ruairí is amazing. Ruairí shot some short films of mine back in the day, and I've always loved him; he's a friend. And he then went off to do big TV and stuff in the UK. When I wrote this, I just instantly thought he'd be perfect for it. I think what you need, as well as a brilliant cinematographer, is somebody who has a sense of humor, and who has a warmth to them. And Ruairí is just the funniest man. I think he really connected with the script and the humor in the script.  I think he just brought so much to it. He'd been out of film for a while because he'd done so much TV. I think he was really excited by the challenge. But yeah, he's great. I mean, I want to work with him again and again.” 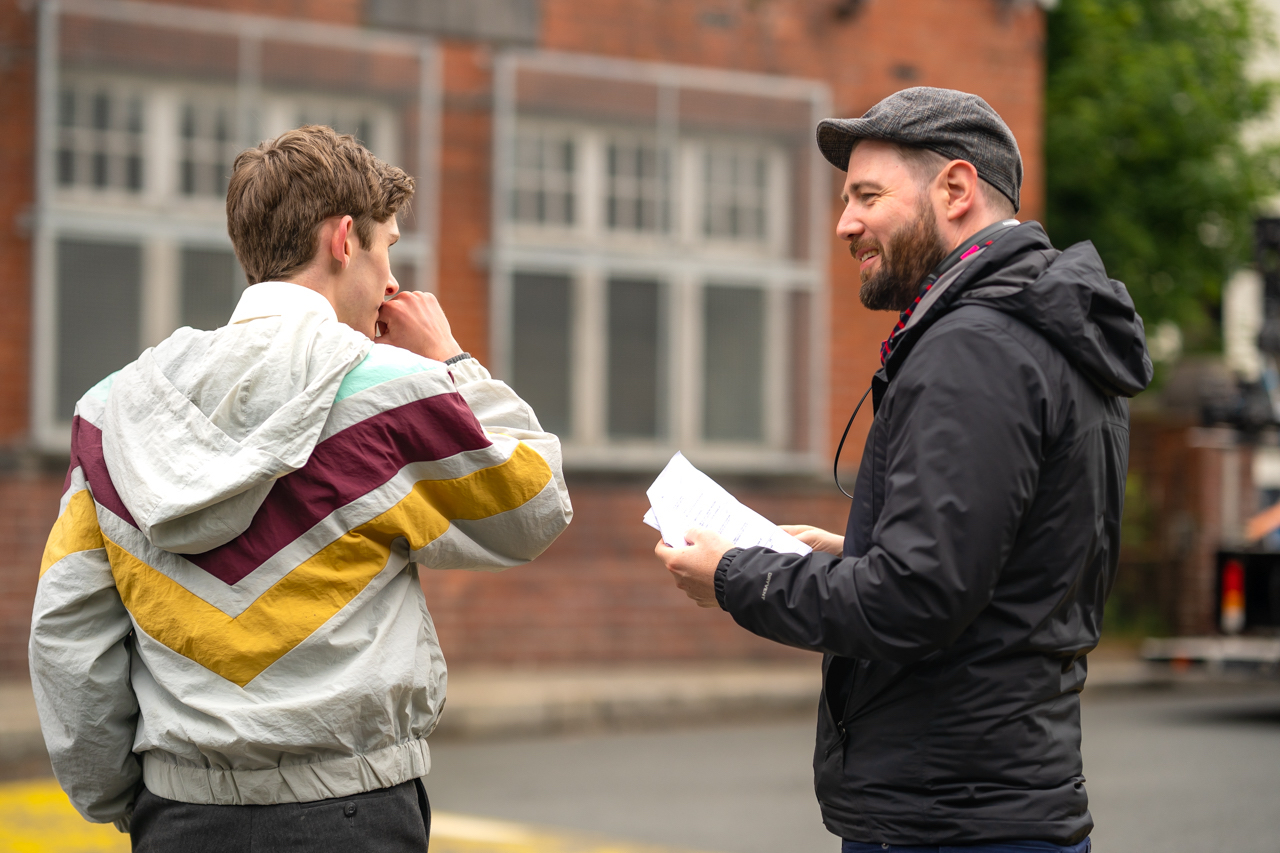 Regarding directing style, are you more hands on and have to make every decision yourself, or are you more about getting the right people on board and letting them do what they do best?

“I think it's both. You have to have your vision, and you have to be able to impart that and describe it to other people. And that's the big challenge. But you also have to, if you want to get the best of people, whether it be Ruairí, or Emma Lowney, my production designer, or an actor, you need to empower them, make them feel a part of it, and make them feel like they can bring something.  They should never be scared to have a suggestion, and sometimes it’s a great idea.

“Filmmaking, at its best, is a collaborative art. I try to be as collaborative as possible. It’s all about that work in pre-production and in rehearsal. It's all about just making sure everyone is trying to make the same film, and everyone has the same film in mind. We ended up having the most incredible cast and crew in this, and everyone put their heart and souls into it. That's why it's as good as it is.”

Would you talk a little bit about the locations where this was filmed?

Yeah. the locations are really fun. It’s actually shot mostly where I grew up, outside Dublin in Kildare.  It’s actually an active military base, so it was really hard to get access. Because my dad was in the army, we used all his contacts, and I lobbied my local politician for months and months and months before we shot the film to see if we could get access. When you write something so specific to a location, it's really heartbreaking when you have to change that. It feels like you're changing the essence of the film. I've been turned down before by the army to shoot there. But I wasn't going to let it happen with this film. The minute we started getting financing, I spent all my time just hounding the military, just trying to get access.

“The fact that we actually got access to that area and that town just meant so much, and it makes the film so much better. It was worth every challenge. It took a good four months of hounding before we got a letter to approve it. And then we had to go in, and do loads and loads of meetings with them, and go through where we wanted to use. Because it's an active military base, they were very specific what we could and could not do. I was just delighted we got any access at all. It's such a beautiful place.  I think we're the first thing that shot there since BRAVEHEART.  So yeah, it was brilliant. It all worked out really, really well.” 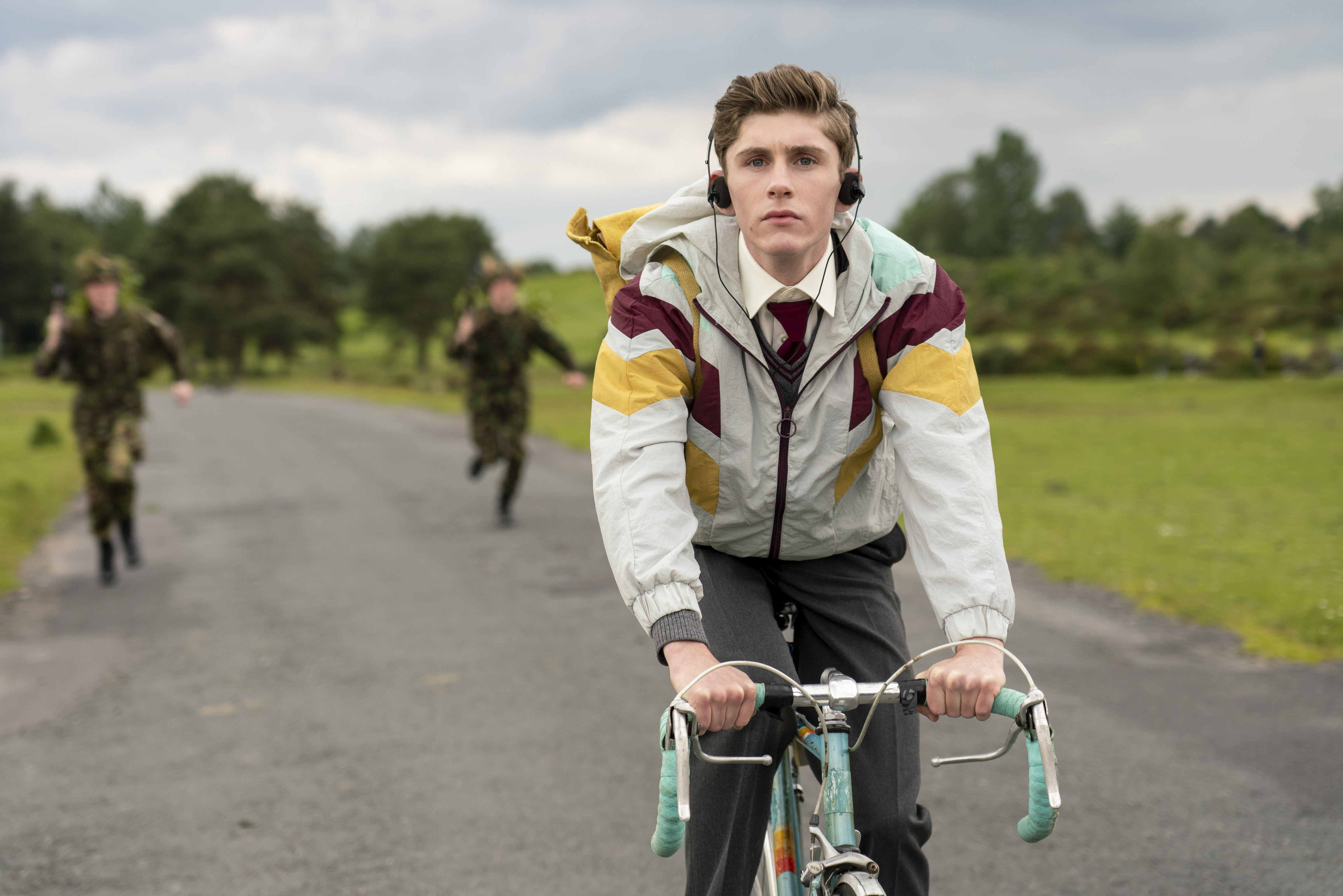 When you write, do you sequester yourself until you've completed something, or do you write a certain number of pages a day for a set duration? What's your process?

“I write a bit every day, or I'll think for a week, and then write in a flurry. So yeah, I'm always writing. There’s no real rhyme or reason to how I do this. I'm not as disciplined as I should be. I mean, I'm getting much better. But yeah, I think it's just by chipping away. I don't have any romantic notions of having a writing retreat for four months, because I'd probably go away and just check Twitter: I probably wouldn't write anything, so I don't do that.”

Starring Fionn O’Shea and Lola Petticrew, DATING AMBER is a delightful and insightful coming-of-age story that yanks at the heartstrings when not eliciting laughter. Samuel Goldwyn Films will release the LGBTQ/comedy/drama/romance film on Demand and Digital November 10.  Check back later this week for my interview with lead, Fionn O'Shea.

Until then, Barbarella out!