Barbarella Goes Off the Grid With Dana Abraham for NEON LIGHTS!

Hey, friends. Barbarella here. Actor, writer, producer, and all-around cool guy, Dana Abraham cowrote and stars in NEON LIGHTS, which comes out July 12, 2022 on demand and digital. In the film that was directed and cowritten by Rouzbeh Heydari, a young tech tycoon attempts to reunite with his estranged family in an off-grid location, but guests begin disappearing. I had an opportunity to speak with Dana, and I asked about the film, working with Kim Coates, and a little about himself, because doesn't everyone want to get to know a little more about the people behind the projects? Or is that just me? At any rate, check it out. 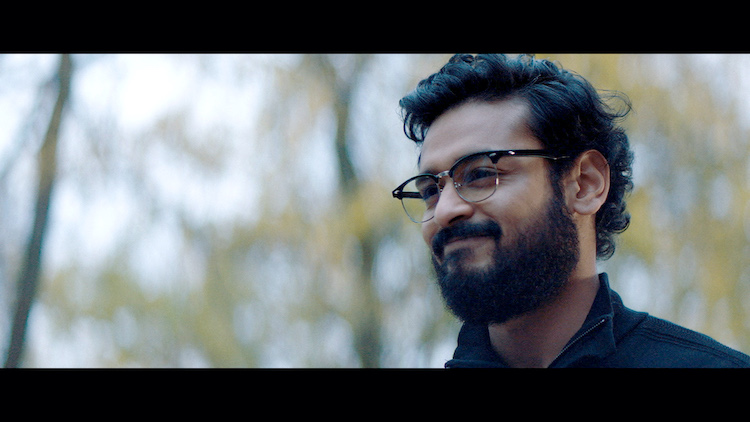 I want to talk a little bit about the writing process. You share a writing credit with Rouzbeh Heydari. How did you guys work on this story?

“NEON LIGHTS is a film that I had already written a couple years ago, but when Rouzbeh and I really started working together, we wanted to create a project around June of 2020. NEON LIGHTS was at the forefront of something that I was pitching him, and we knew that as it stood, the project itself was unaccomplishable during the pandemic with the restrictions and all of the different lockdown procedures and protocols that were in place. So Rouz and I just really started distilling and boiling the script down to what you see now, from everything from the story and the cadence of the characters and the beats to how many characters were in the film, limitations on crew and cast. And so we really started with what the overarching theme in this story was and then really worked from there. He was very hyper-involved from the inception of the brand-new draft all the way down to obviously the film itself and the post, getting through that process.”

Cool. Who determined the nervous laugh kind of quality that Clay had? And how long did it take you to perfect that? 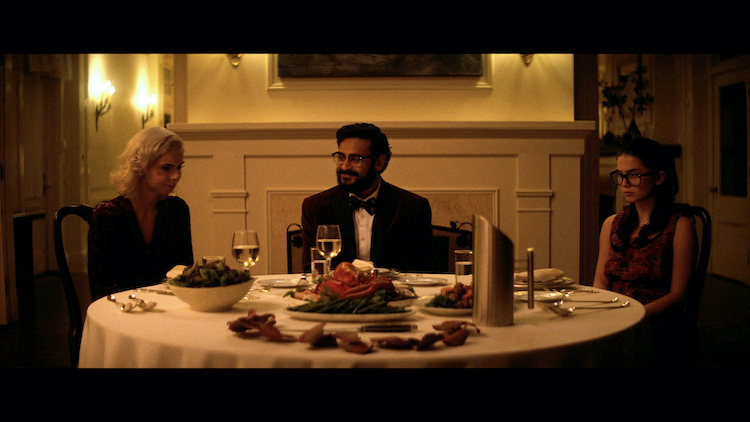 “You know what? Okay, so I had watched a lot of YouTube videos, and Rouzbeh and I worked really diligently on the character. Our big emphasis and focus was to ensure that we wouldn't be disrespectful of anybody with mental health disorders or illnesses. We had spoken to a psychotherapist from the University of Toronto, and she had just said to us, and I'll never forget this, she said that every individual that goes on to that level of spectrum usually develops some sort of tic or some sort of laugh, something that they [use to] help cope. And I acknowledge that for me – and now everybody will know when I do this that I'm nervous – I always hum, or I'll do something of that nature, I'll sing or something any time there's a nervous moment or something that's awkward in my life... For Clay, I felt like it was a little bit of a laugh, something where he was trying to take a breath and couldn't. It's funny you ask how long it took me. I spent pretty much weeks just recording myself on my phone, seeing how it looked, and it started just formulating into something weird anyway, that I just felt like he wouldn't have ever perfected it, so I just worked it towards the character.”

Yeah, I found it really creepy.

This features a socially awkward tech genius and also a therapist. Who do you think has a greater impact on the world, therapists or tech geniuses?

“Well, I would like to say a therapist, but we all know that it's tech geniuses right now.”

With the colored rooms in the house, do the different colors symbolize anything?

“Yeah. Rouzbeh is a really particular person. He's very intelligent, so for him, he wanted to create meaning for everything in the story. Everything from Clay's behavior down to the other cast and the characters' behaviors, all the way down to the production design. But for the lights themselves, in the initial script NEON LIGHTS, I just had lights because it's something that I had seen, and I thought it'd look really good cinematically, but for him, he wanted to be very particular. For each of the characters, we delved into a different aspect of the lights, how it pretty much evokes personality and meaning in relation to emotions, and so all the lights were basically emulating the characters themselves. You have green for James and so have you. It really just boils down to personality traits.” 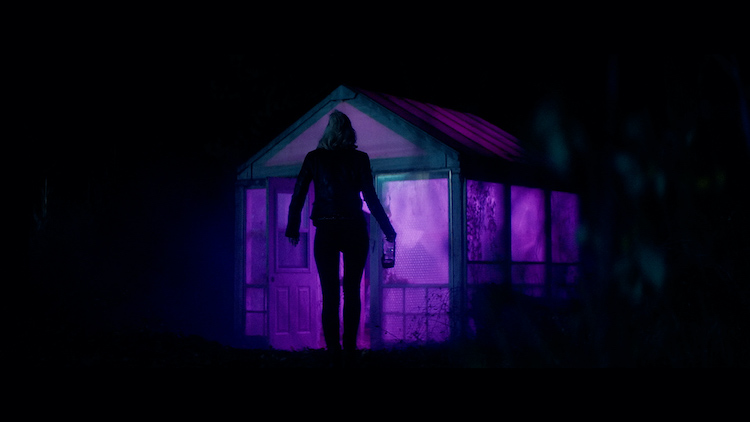 Okay. So much of the film feels very dreamlike to me. Do you remember your dreams? And if so, what's the most interesting dream you recall?

“That's a funny question because the first commercial I had ever done was for a company called Sleep Country. They make mattresses. When I was kind of lying on a mattress when we were shooting the commercial, I looked up in the ceiling. There were clouds, and it had stats, and one of them was “It takes five minutes for us to forget our dreams and thirty seconds to start forgetting different aspects of our dreams.” So, I write some down.

I wonder what would happen if you ever made yourself stop and face them. Instead of running, you just stop.

Oh yeah. Okay, maybe it's good that you run. (Laughs) Where was this filmed? Is it as isolated as it seems?

“It was filmed in Ancaster, which is a suburb of Hamilton, Ontario, the town I grew up in, where we had the world premiere two days ago. But yes, it is very isolated. When it came down to the pandemic, I'm big on logistics when it comes to producing, and we wanted to ensure that we kind of stayed in the same grid, meaning I wouldn't have to pack up trucks and move things around because we were limited on the shooting days, which was fifteen based on insurance, and we were limited on resources. We found a location, which was the Tomahawk Club. It was ninety-nine acres and had three different types of forest and creeks. It had rivers; it had a waterfall, and it had several different housing units and a gun club. We basically parked our trucks, and for fifteen days, we were on that location.”

Okay. “Sons of Anarchy's” Kim Coates is also in this movie. How did you learn he'd be involved in the project, and what was your initial reaction to that? 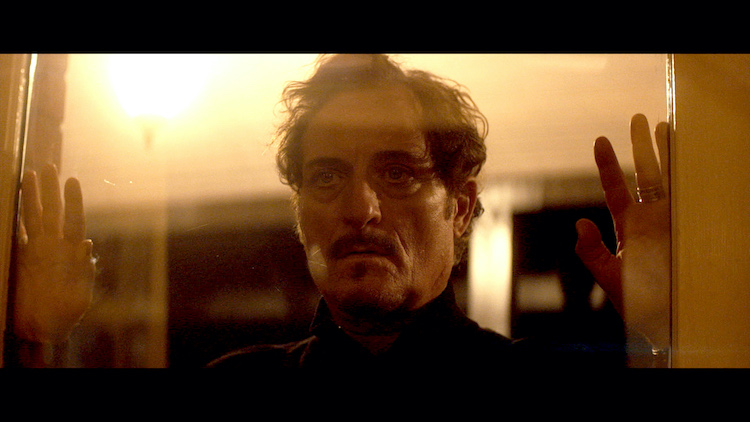 “Well, I actually reached out to his team and his management team, originally, so I pretty much wanted him from the onset. As soon as Rouzbeh and I really boiled down the character Denver, the first person that came to our minds was actually Kim Coates because he's somebody I've wanted to work with for quite some time. “Sons of Anarchy's” one of my favorite shows. It's one of my closest friend's favorite shows. I learned to ride a motorcycle because of “Sons of Anarchy” really early on in my age, and I still ride motorcycles to this day. And then you couple in "Bad Blood", which mob culture, Italian culture is a really big influence in Hamilton, in Stoney Creek in Ontario, so he's just been a primary focus in Hamilton and just this greater horseshoe area for such a long time.

“When he had finally accepted the project and said he wanted to do it in our first Zoom call, honestly I kept it together. Barbara, I looked like I was somebody that almost didn't care it was Kim Coates, but inside, I was just so jittery, trying to keep my words together, trying to form proper sentences. And now that he's almost like a father figure, a mentor, I get geeked up every time he calls me his son, and I'm just a really grateful individual to have worked with him and [get to] call him a mentor and father figure, and I look forward to working with him more and more and more as we kind of go down our careers.” 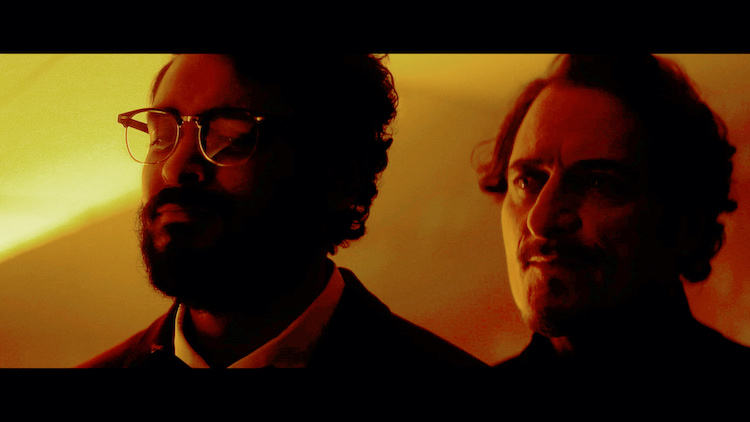 That’s great. What was your favorite aspect of working on the film?

“You know, I would probably say releasing it. It was such a challenging project and something that I'll always remember. I'm really looking forward to getting the movie out there, and I think the world premiere on Sunday just went so well that at this point, I just want the world to start seeing what it is that we've seen when we filmed this project. But it was really, really challenging, to be honest with you. Every day we'd go to set, and we'd worry if we were going to get shut down because of the lockdowns and the pandemic itself. Then on top of that, we just wanted to make sure that we kept everybody safe, and we didn't put anybody at risk because we had our own personal ambitions and endeavors propelling us forward. So overall, I'm really grateful that we made the project, but I'm really more excited to get it out there in the world."

Yeah, that's got to be a great feeling having it finished. 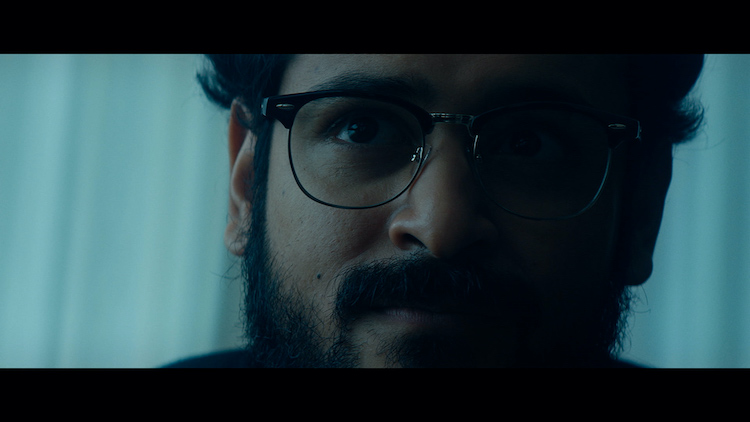 What is your favorite way to spend a day off?

“You know, I adopted Cleo, my dog, November 6 of 2021, and I always wonder who rescued who. She's one being that I don't run from, I actually have to try to keep up with [her]. I spend a lot of time hiking with her. I go to the gym a lot. I read a lot of books. Right now, I'm reading “A Little Life” by Hanya Yanagihara. Brilliant, brilliant writer. And my family. I just spend a lot of time with my mom, my sisters, my nephew just got into go-kart racing, so we're on races on Sundays. So that's how I spend my days off, if I have any some times. But that's how it usually goes."

Awesome. Well hey, it's great talking with you. I've got to head out.

“Awesome. Thank you so much for having me, and I look forward to talking to you down the line.”

You can check out Dana Abraham, along with Kim Coates, Brenna Coates, Brit MacRae, and Erika Swayze, in NEON LIGHTS when it comes out on demand and digital July 12, 2022. Check out the trailer.