Cosmo Jarvis Shares His Experience Working on THE SHADOW OF VIOLENCE

Hey folks!  Barbarella here contemplating why crime family dramas interest me so much.  Perhaps it’s that family life can be challenging all on its own, but when you mix it with mob life, it gets even more dramatic.  While I enjoy a good mobster movie, what I enjoy even more is an Irish mobster movie.  I struggle to put my finger on the reason.  Perhaps it’s just the accent – I do love an Irish accent – but maybe it’s that they take a slightly different angle than the American gangster or Mexican cartel movies that I’m used to seeing.    THE SHADOW OF VIOLENCE is the latest film that has me pondering these things.  Dropping September 1 on Digital and On Demand, the gritty film takes us into rural Ireland, where the Devers family employs former boxer Arm to serve as an enforcer for the family business, drug-dealing.

Cosmo Jarvis (HUNTER KILLER, LADY MACBETH) plays the enforcer who seems to live on the fringes of family, both skirting around the Devers and struggling with an ex and child who is possibly suffering from autism.  I had an opportunity to ask Cosmo a few questions about the movie and his ideas on a few topics. 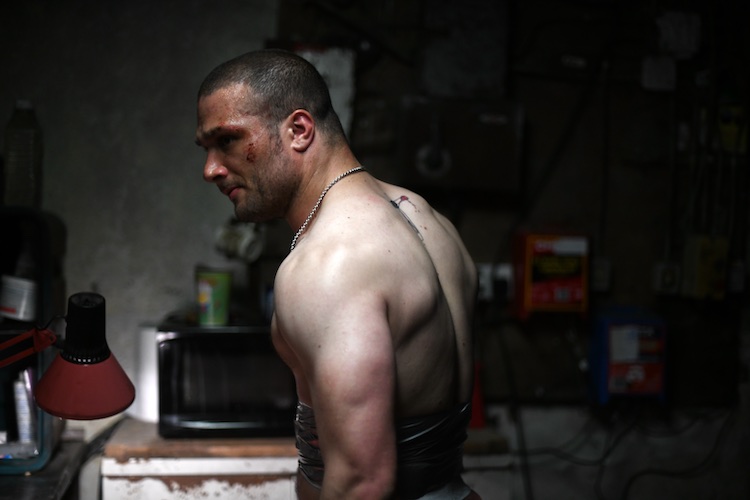 Having heard about the nature versus nurture debate for years, and since the movie focuses on a crime family, I thought I’d find out if Cosmo believed that it’s more likely that violence is inherited, or that environment and upbringing have a greater impact on violent tendencies.

“I have not yet begun to unravel this in my own mind, as it’s too complex, and I’m not properly qualified. In a sense, violence is natural. You need only watch a David Attenborough show. Primates are violent, especially humans, I hear. It is more our skill at being civilized by greater society’s definition, and if that definition and principle have been properly conveyed through upbringing and environment, that affects the level of violence of a mentally healthy individual, I’d guess. So, I guess nurture, if I had to differentiate.”

Speaking of differentiating, Irish accents can differ regionally, and it’s often challenging for one to master unique aspects of a region’s accents.  I inquired how Cosmo nailed the accent.

“I just love the way people talk and vocally express. All people. Fascinating stuff. I love listening to the character in people’s voices, in individual, familial, colloquial, regional, national, continental, global and universal sorts of ways. Voices are just things that I always noticed as being some of the most intimate and wonderful unique things about human beings. I appreciate them. A person has little else which is gut/soul rooted and is as helplessly expressive as a voice is.”

I believe that’s his way of saying that he truly listened to everyone during his month-long stay in Ireland before filming started.  I wondered what he did while he was there.

“Drink. Talk. Wander around and think. Look for clues. Look at the land. Listen to stories. Have interactions. Look for details in the place and people and think about what might have made them and where they came from. Think about the open doors and closed ones. I went to this place they have there, which is like MacDonald’s, but it’s homegrown, I believe, called “Supermac’s.”  Far superior in my opinion as a life-long guilty connoisseur of MacDonald’s. In the morning, you can get a proper sit-down breakfast with proper bacon in there, as well as burgers with proper spud potatoes where you can taste the earth, a sit-down breakfast for a reasonable amount of euros. I used to hang out in there and watch the world go by. Naimh would join me as well sometimes.”

After that, I decided to switch gears from places to people.  Kiljan Tyr Moroney was the youngest cast member, at only age 5.  I was curious how his presence on set impacted the dynamic of the shoot, and what it was like for Cosmo working with him.

“I mean, there is less cursing, in general. Also, as a team, often times we all have to be especially mindful of our efficiency as a unit, as children have a limited window in which they can legally work per day. Other than that, it’s pretty much the same. I mean, everyone wants the experience of a young one to be a good one, a fun and memorable one, one that will encourage a good feeling about working in this industry in the future. Our crew were all exemplary, and our first assistant directors were both brilliant and well-seasoned at working with children.

[Working with him] was, for want of a better word, a laugh. Naimh and I spent a lot of time together messing around, having football kickabouts, going to crazy kid parks, with ball pools and jungle gyms, and getting to know each other. You certainly can’t get any dishonesty past him, as he’s the first one to say, “You did it better on the last one.”  He’s a very confident, outgoing young man with things to say and observations to make. Children are more used to committing to their play ideas than jaded, withered adults, and to be honest, Kiljan set the bar very high.”

In addition to information on working with his young costar, I also wanted to know what he had to say about working with director Nick Rowland.

“What I remember of my experience portraying Arm is that Nick is like a ghost. Not Casper. But friendly all the same. Always with you, appearing and whispering something, always a glance away to answer a question. Committed to the structure of things, but never at the expense of exploration. Hungry to witness, truly losing himself in what he’s doing. Watching and hopefully becoming inspired by what’s happening.  A lot of what he does is about feeling. He’s very calm. Nick is as deep in his feelings as any of the characters, and in striving to be true to them, he helms in a way which only ever encourages the actor to be more true to their character’s feelings. It is Nick’s unbridled love and empathy of the characters and what he feels about the story, which he wants others to feel, that sets this sincere and nurturing terrain for an actor to work on.” 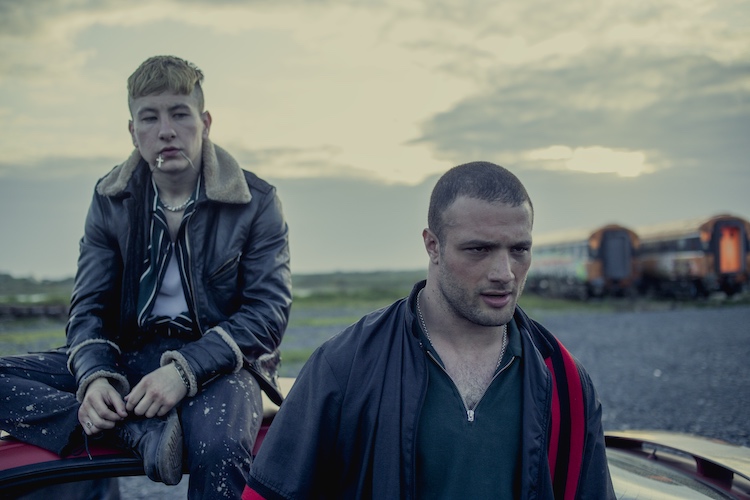 Afterwards, I wanted to hear a little about the stunt work involved and if Cosmo did any of his own stunts.

“The few moments of violence the movie has were carefully crafted by Nick [Rowland] and Peter Pedrero. Norman Kelly did Arm’s driving stunts. Being in a car with him was pretty awesome. Great guys. Brilliant stunt performer Branislav Martinak took the amazing hit for Liam Carney’s Fannigan character when he went through the glass table. Arm doesn’t get smashed up a lot, so I did Arm mostly, always looking to the stunt performers to learn and ask questions - refine the punches, the beats. They are incredibly patient and dedicated and bring to the table so many fine touches that root the happenings of our story. They put in so much effort to create and, if need be, adapt a fight on the day. Although Paeder Cox, our wonderful dialect coach, was who actually brought attention to how much a connecting punch can actually smart the puncher’s knuckles.”

Sadly, I didn’t have an opportunity to follow-up on that question to get the story behind how the dialect coach knew that, but life teaches us that we can’t always get what we want.  Maybe one day, I’ll get to hear it told with an Irish accent by Paeder Cox, himself.  For now, I was happy to get Cosmo’s perspective on his character, Arm.

“Arm is doing right the best way he knows, as we all are.  I recognized his already barreling down his trajectory before it started to bleed into his attention - and what that meant for the others around him. I noticed his sincerely being unable to back-pedal from where he is after peddling forward for so long just to stay alive, busy, and useful. The encouragement and advice Arm receives is rooted in sentiment – sentiment so fractured and eroded by the time he hears it, the language and logic used to convey it can simply not be understood by him.”

We all have things we don’t understand, and I believe continuing to seek understanding and learning through experience proves essential to living a good life.  I wanted to know what Cosmo learned while making this film. 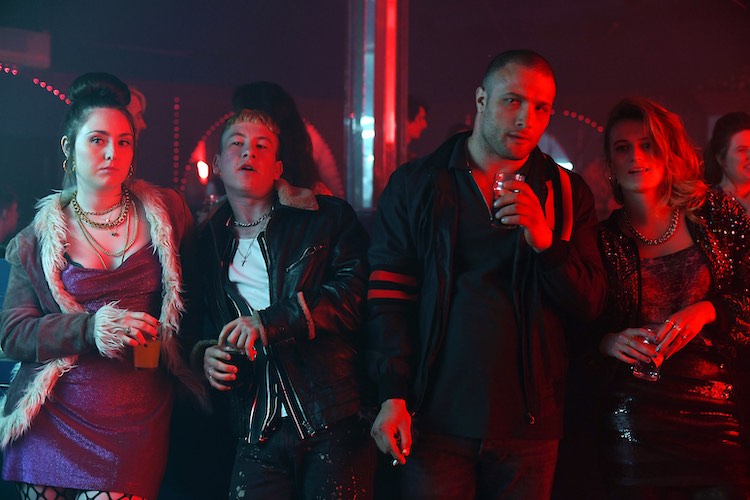 “Many things, but I’m still processing it all and will likely continue. Ned Dennehy is a genius. Celtic Soul Food catering company are top notch catering. Ireland is the real deal. Instead of saying, “He hadn’t a clue,” I met someone who said, “He hadn’t a bull’s notion.””

That may be my new favorite expression.  Watch me use it in a sentence. Cosmo believes not watching his performances may mean he wouldn’t have a bull’s notion on how to improve them.  I know this from the following response to my inquiry about whether or not he watched his own work.

“It’s just necessary sometimes. It’s always odd, and yes, part of me would rather stand outside and maybe smoke a cigarette or two and maybe leap from a tall building, if I can find one.  But then if a man, blinded by a dark room, paints a picture and then strives to paint a second, improving on the errors of the first, well…  he just wouldn’t be able to. I dunno. It’s weird. It’s just comforting knowing any faces you see in movies are just artistic components of a larger piece of art, which has nothing to do with the owners of those faces.”

If you want to see Cosmo Jarvis’ face, along with Barry Keoghan, Niamh Algar, and Ned Denehey’s, you can check out the thriller, THE SHADOW OF VIOLENCE, starting September 1 on Digital and On Demand.