Hey, friends. Barbarella here. THE FRIENDSHIP GAME is available now in theaters, on digital, and on demand, and it stars Peyton List, Brendan Meyer, Kelcey Mawema, Kaitlyn Santa Juana, and Dylan Schombing. You may recognize Brendan Meyer from The OC or Color Out of Space, and his latest project looks at what happens when friends test the strength of their friendships with a game. I had an opportunity to speak with the charismatic, young actor about his involvement. Check it out! 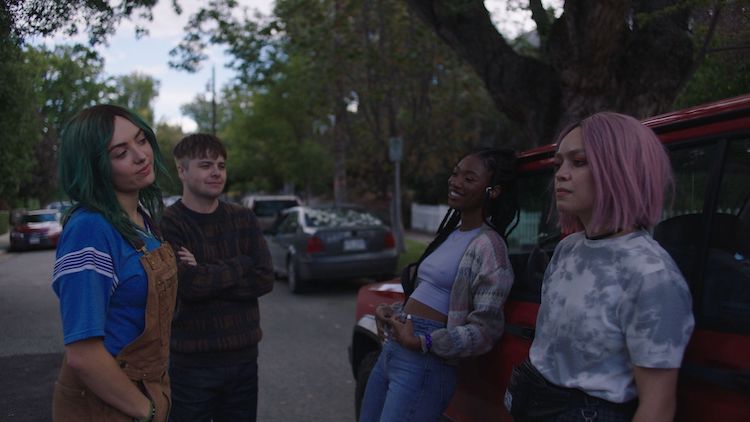 If your deepest, innermost desire came to fruition, what kind of impact do you think that would have on your friendships?

“Well, hopefully it would still be good. I mean, it probably would involve doing a ton of acting, even more, for a very long period of time. Maybe I wouldn't see my friends as much if my deepest desires came true. I don't know. I also have desires about maybe having a family one day and all these things; that would also take me away from my friends. I don't know, maybe I'd lose some time with my friends. That's why I've got to soak it in now."

Get that time in now, for sure.

How did you get involved in The Friendship Game, and what was it about the story that appealed to you?

“I did audition; I sent a tape out. It’s actually kind of an interesting experience because I sent the tape in late 2020, and then I didn't hear anything, and I was like, “Well, another thing, tape sent off, not going to think about it anymore.” Even though I thought the script was really, really cool, and I was really kind of drawn to the character, I kind of forgot about it because it was many months. But I guess, the shooting got pushed a little bit. They were originally going to do it at the beginning of 2021; it wound up happening more like August.

“It was in the summer. They were like, “Hey, I think they're interested in you for The Friendship Game. I think you're going to get it.” And I was like, The Friendship what? Didn't that already shoot? Then I zoomed with Scooter, the director, and really, really liked him. Then it all came together pretty quickly. Kind of went from me forgetting about it because it had been so many months, and then I was doing it. So it was exciting.”

In what ways are you similar to and different from Robbie, I mean, Rob?

“I think he was not too far off from me, actually. I think he's a fun-loving guy and hopefully a good, solid friend. I've definitely had a lot of female friends in my life at different times. That was fun, forming all these immediate kind of new friendships with the three actresses in this. It's kind of funny because almost immediately the four of us kind of bonded, but there I was in the Rob role, so that was fun.

"I would say, big picture, he is actually pretty similar to me. He's probably a little cooler than I am, not much cooler, but a little bit. [There were] just little things that I changed about myself to portray him in a way that he fit. I mean, he's maybe more of an outcast, oddball type with his vibe and his style than I am. Maybe not in personality, but in style anyway, so that kind of informed subtle changes. So yeah, it was kind of fun. I feel, overall, I connected to him pretty quickly, but there were little things for sure.” 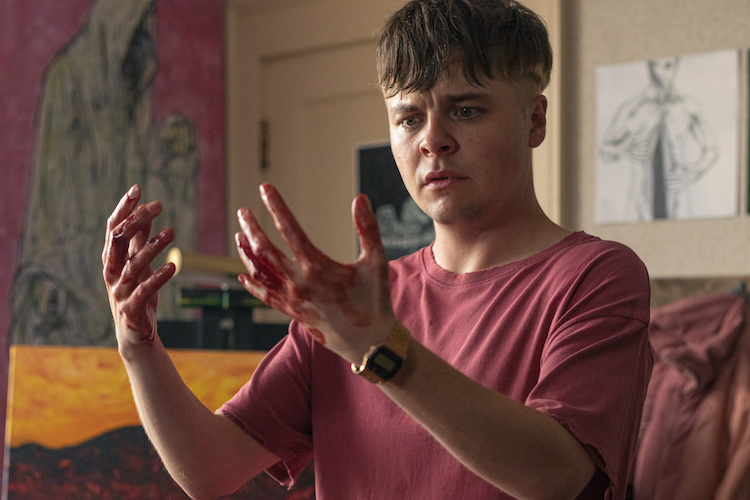 I liked the sets. What was your favorite set to work on and why?

“Yeah. Well what was cool, the set that I thought was really interesting was where the big party happens, because in the initial script there was a great atmosphere set by the script, but it was at a house. I think once we got to this shooting location, and that was an old hospital that was basically abandoned, and I think it maybe is set to be demolished at some point, if it hasn't [been] already. They got that location, and then they had local graffiti artists come in and do all the graffiti. They really transformed this space. It’s such a key centerpiece of the movie, what happens at the party and the vibe of that and the sort of danger and fun of that, to be inside something that was not just a typical house party, but had this sort of iconic, weird vibe added so much. Even when filming, it was like, “Oh, this feels like a maze of rooms and anything could be happening.” And that really informed both the shooting of the scenes, and I think, turned out really well in the final edit.”

If you had to be trapped in an elevator with one other person from the cast, whom would you want it to be and why?

“Oh no. All right. I love all of them. I think Kelcey is so on it. She's so smart. She would know how to get out. I think she would get me out the fastest, and I don't want to be stuck in the elevator. I'm going to say Kelcey. I think Kelsey seems to be the one that would snap into action the best in a crisis situation. But I don't know.” 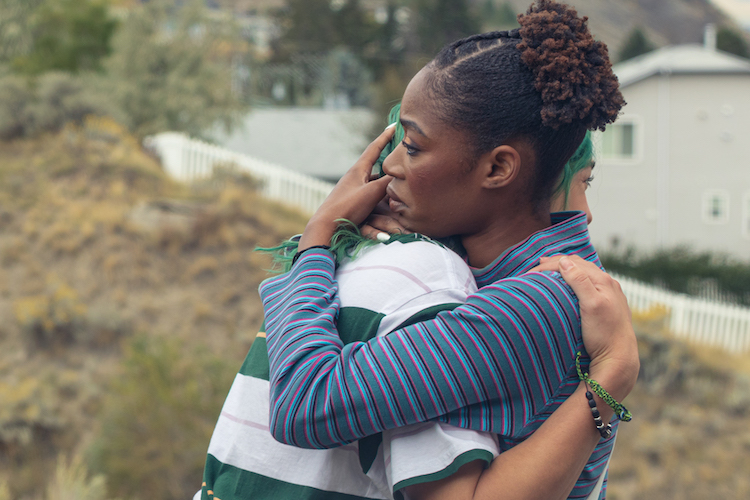 If someone made a Muppet movie about your life, which Muppet would play you and why?

I think Kermit would be a good you. That's just my take on it.

You’ve directed some shorts. How would you compare your directing style to Scooter’s?

“Ooh, that's interesting. How would I compare my directing style to Scooters? I think the good thing is, I think it was actually pretty similar in terms of how he…I would say one of the things that he did that I always hope to do when I direct, is he kind of had that mix of being focused, but being emotionally available and caring about it. You don't want to just show up and be like, “Hey, we're all here to have fun. Who cares?” You’re the director. You have to have a vision. You have to sort of have plans for these things. Everyone in the crew feels comfortable when they feel the director actually has a plan that he's following. It's important, especially with actors and really with all departments, to create that sense of that play, that sense of fun. At the end of the day, it's supposed to be creating art. It's supposed to be playful. It's supposed to feel a bit like summer camp or something. I think Scooter always kind of made us feel like we were comfortable in that way. 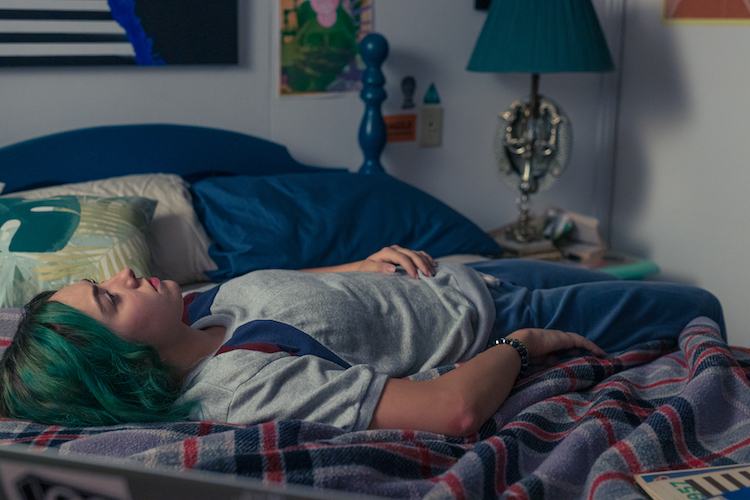 “I know for me, when I've directed stuff, I've directed stuff where the actors have to be in some kind of dark places, and you need to make them feel supported and make them feel like you are watching with a critical point of view so that hopefully you're not noting people to death, unless they really need it, I guess. But I've never done that thankfully, and neither did Scooter. If you come in, and you say, “Hey, maybe do this or maybe try this,” as an actor, you're really feeling like, "Okay, this is getting us closer and closer to the final product." Those are some of the things that I saw in Scooter that I try to emulate, as well. And yeah, he's just a rad dude. He's a buddy. I still hang out with him when we're in town, same city. That kind of even happened later. He was really focused on the set, in a great way. I think he balanced all the balls in the air really, really well, so I learned a lot.”

Cool. What's the most interesting thing that happened behind the scenes while making the movie?

“We were filming in Kamloops, which is maybe two hours outside of Vancouver. When you film on location like that, and especially a smaller – not that it's a small town, but smaller than a Vancouver or a major city hub – you're all in the same hotel; you're all next to one another. We filmed right around Halloween, actually, so we had a Halloween party.  One of the hotels was a motel style where they opened up all the different rooms, so we went over to that one, and you kind of go from room to room to room. That was a really, really fun day.

“It’s interesting when you're in those hotels, because I've had this happen a couple times in my career, when you're staying in the town where a lot of people are staying in the hotel for one night or for a sports' tournament. We were there for three weeks, and it's just weird when you see the different people kind of move in and out of the hotel. You get a whole kid's soccer team, or it is just kind of weird when you are in that zone for so long when most people are moving through hotels in those kinds of areas quicker. There's always little colorful characters, interesting things going on.” 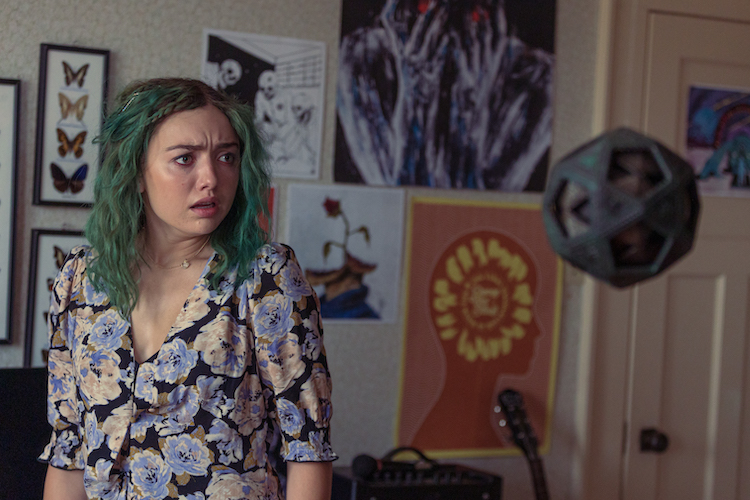 There’s a movie in that. I think that people learn something from every project that they work on. What did you learn while working on this one?

“I think the biggest thing that I remember, just as an actor, there's so much intense, heavy emotional stuff towards the end. I remember one of the scenes, it's like it was late at night, and I had to have my hands in the specific situation to be in the right look of the shot. I remember just thinking, “I just have to try my best,” because there's so many factors. You can read a script and see intense emotional moments, and you can go, “Oh my God, okay, this is going to be a big scene. This is going to be a big scene.” You try not to think that, but you can't help it. I think, this has happened on other shoots, and I maybe hadn't learned the lesson, which is, just by the nature of filmmaking, there's just no way you're going to be in the perfect situation all the time to deliver that kind of stuff.

"Learning to continue to give myself over to the process and not be too precious about the circumstances, and also try to use that as a kind of empowering for the next time I have to go to some of those darker places. You're not in the perfect setting. You just have to do what you can in the moment. That was very freeing, and I felt like it kind of took the pressure off a little bit, kind of the right amount. You don't want to take all the pressure off, but that's one of the nuances of acting, really, is figuring out how to take the pressure off when it's going to be conducive to you giving your best performance and when you want to apply a little pressure and go, “Okay, I got to work. I can't have too much fun.” It’s an interesting balance, always.”

You can catch Brendan Meyer in The Friendship Game now in theaters, on digital, and on demand. Here’s the trailer.