Hey friends!  Barbarella here.  I’ve been spending my time in lockdown speaking with actors and directors from around the world.  One such conversation takes place with Brandon Christensen, a filmmaker following up his last onscreen parental nightmare, STILL/BORN, with another film seemingly designed to freak out parents.  In the film Z, a family is terrorized by their eight-year-old son’s imaginary friend.   Having a short call with him, I jumped right into the questions. 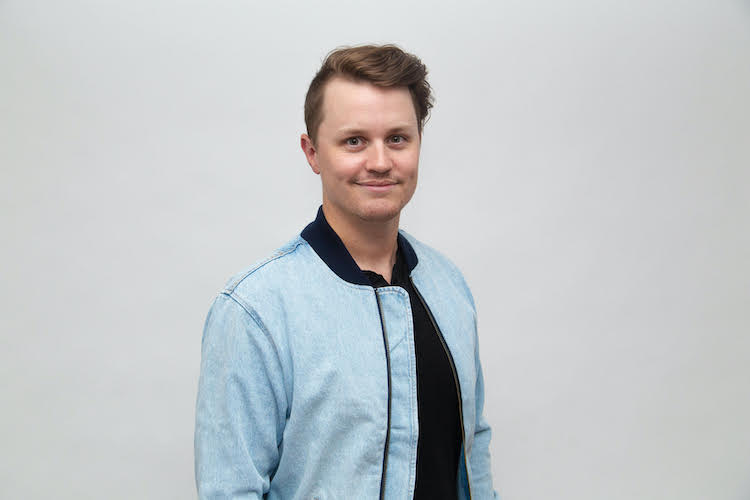 To me Z represents the kind of damage that can be done when one is trying to resurrect the past.  Is this at all what you were going for, or am I just creating my own narrative?

“No, I think you nailed it.  I mean, I think the film is definitely leaning in that direction.  I think you just look at the way the two houses juxtapose each other.  The Parsons’ house is very sparse and contemporary.  There’s not a lot of memories on the walls, but then when you go to the grandma’s house, it’s just cluttered.  It’s basically a time capsule from her childhood.  Everything was still where it was, and there’s all this stuff packed away.  It’s just a place that no one really likes to go anymore, so I definitely think that this forgotten history that she has as a child is all about bringing back these past traumas so she can actually, finally deal with them.”

You have children.  What did you draw from your own parental experiences when writing Z?

“The biggest thing was just my oldest son at the time, he was in kindergarten when we came up with the idea.  It was the time where we kind of let him out into the world, and we didn’t have control over him for the majority of the day, so he would come home and would have all these new ideas and drawings and things like that.  Things that we were just kind of surprised by, and he’d be like, “Oh, I’ve got this interesting fact.” We’re just like, “Oh that’s weird.  Where did you learn that?”  So, my wife and I started talking about this idea about what if this kid, or our kid, brought home something that was just potentially evil or could tear our family apart.  We started talking about what he could bring home, and my wife threw out the idea of an imaginary friend, and it was just like a snowball effect.  We started throwing ideas out back and forth, and eventually we came up with the idea of Z and this imaginary friend, who might not be imaginary and might have ties to the history of this family.  It was a very organic process that just came from the experience of having a kid going through kindergarten.”

What is the significance of the name Z?

“Honestly, it’s a really bad answer.  The very first night, when my wife and I were talking about it, we didn’t know what his name would be.  We didn’t know anything about him, so we just gave him a letter, kind of just a variable right now.  We just called it “Z,” like x, y, z, and that night when I was on my computer just writing down some ideas for the film, I kept thinking just the letter Z, and we started talking about an alphabet toy, a little kid toy that would have the alphabet letters in it that we could play with, and the name just ended up sticking. It was just kind of the first idea that popped up.  We totally thought we’d change it, but it just never happened.”

I think it works.  What inspired Z’s look, and would you talk a little bit about going from the concept to the effect?

“Sure.  When you’re doing a super-low budget film like this, you don’t really have those concept artists that they might have in Hollywood or something like that, where you go, “Hey, I need something terrifying by noon tomorrow.  Give me thirty drawings.”  It's basically the crew going, “Brandon, what does Z look like?” And you’re just like, “Uhhhh, I’m not entirely sure.” So, you start looking at the horror movie staples, and you find the tall skinny man, you make him naked, and that ends up being pretty creepy.

"The biggest thing that we were kind of struggling with was just figuring out how can we make something scary yet accessible enough for a kid to want to play with it.  We came up with the idea of having a big smile on his face so a kid could potentially see that under the right light, and it could appear friendly, but if you see it with adult eyes, it looks a lot more horrifying.  That was kind of the big design aspect, and then Brittany Allen, who did the score as well, she sent the charcoal drawing to us right when we started production, and we gave her some ideas like the tall and skinny and the big smile, and she kind of added her own little artistic flourishes.  We tried to use a little bit of VFX on the actor that we had for Z to kind of match her charcoal drawing a little bit just because it was such a creepy and foreboding thing.  We ended up putting it on the wall, so it’s just kind of another very organic process.  We had limited resources and used what we had.”

Do you think your kids would have played with something that looked like Z?

Are your kids too young to have seen this movie yet?

“Yeah, my oldest is almost nine, and my youngest is a year.  They’ve seen the poster on my wall and stuff like that.  They’ve seen little bits of it, and they were even on set a couple of times as people were filming.  They’re scared enough of stupid things, so I wouldn’t want to give them something really scary.”

Would you talk a little bit about the casting process? What qualities were you really needing from your actors that drove your decision on whom to cast?

“Well, with Keegan we got really lucky.  It was like a week and a half before production that she jumped on board.  We had an initial discussion with her, and she just sort of had this maternal vibe about her, which was super important.  I really wanted to find somebody who just could embody this maturity of a mother that’s kind of had a kid for a while.  She’s not a new mom anymore; she’s been dragged down from sort of the daily ritual of parenting where you get up, you make breakfast, you make dinner, you put them to bed, and then you have a little bit of time for yourself.  It was really kind of a big deal that when we talked for the first time, she was able to say she got it.  She had kids of her own, so she totally understood that process and sort of the full-time job that it is to be a mom, and so I thought that that was going to be a ton of fun.  She’s done so many different things like the Blue Fairy in ONCE UPON A TIME that shows she has this super imaginative side, where she can play these very strange characters, and I thought for the last act of the film, we definitely needed to capture some of that.  She was a big get.

“Sean Rogerson we actually had in mind when we wrote the part because I worked with him before on STILL/BORN, my first film.  He was just someone who is such a delight to have on set, so I knew that getting him in there would just be a ton of fun.  He’s always so great to work with.

"Jett Klyne was just like a total fluke.  You’re casting a little kid for a creepy kid film, and so much of the weight of the film goes on this little kid’s shoulders.  That’s always terrifying, especially when you don’t have the money to cast a wide net, so we put up a Facebook post asking just randomly if we could find anybody that was interested.  The very first person was Jett’s mom reaching out like, “Hey this is my son, and we want to apply him for this role.”  We cast him basically immediately.  He was the first person we cast on the film, which was really crazy.”

Wow, I didn’t even think Facebook would be an option for casting.

“We didn’t either.  It was a total fluke. I couldn’t believe it.”

Are you going to do more of these family-type horror movies in the future?

“I definitely think I’ll return to it.  I think I’m still in the phase where I’ve got kids in the very beginning part of elementary school.  There hasn’t been anything too new to inspire me yet.  I’ve got another film that I’m going to camera on in October, and there’s zero mothers being terrorized in it.”

You wear a lot of hats on this film what was your favorite and least favorite part of each: writing, directing, editing, creating effects?

“The hardest part about the writing was just figuring out why Z was doing what it was doing.  My wife and I wrote the first draft, and it was always missing the why.  We had the idea of it being this imaginary friend.  We had this past trauma that she was trying to get over and all these things, but it never really coalesced into anything.  When Colin Minihan joined on the second draft, it was definitely just a huge struggle to try to figure out how we make the story kind of wrap up in a way that makes sense.  That was the hardest part of that.  [My favorite part], writing things that actually scare me as a parent is always really fun.

“The production was crazy.  You’ve got 20 days to shoot 180 plus scenes, a lot of them don’t even make it to final cut.  It’s just this vortex of insanity where you’re just hustling each scene, trying to get it in a way that’ll function for the story.  You don’t really have time to really play with each scene, so that’s always a challenge. I mean shooting the last week of the film was basically all just Beth by herself in the house which was really fun because we got to put Keegan through hell for four straight days.  That was a blast.

“The edit was tough.  This is the first film that I edited completely by myself, and I did all the visual effects as well.  I mean, it was just a long time of just sitting there and kind of working on one part of the film and going to visual effects and trying to polish other parts.  I don’t really have any good memories from the post production of it.  It was satisfying at the end of the day when we had our world premiere at Overlook Film Festival and you have the audible gasp of everyone seeing...(redacted).  It all ended up being worth it.  At the end of the day, I’m talking to Ain’t It Cool News, which I grew up on, so it’s just kind of an honor for me.”

The honor was mine.  I'd be interested to see what Brandon's kids inspire once they hit middle school.  I guess we'll all have to wait for that.  In the meantime, Z, starring Keegan Connor Tracy, Jett Klyne, and Sean Rogerson comes out on VOD, Digital HD, DVD and Blu-ray today, September 1.  Check back tomorrow for my interview with Keegan Connor Tracy. 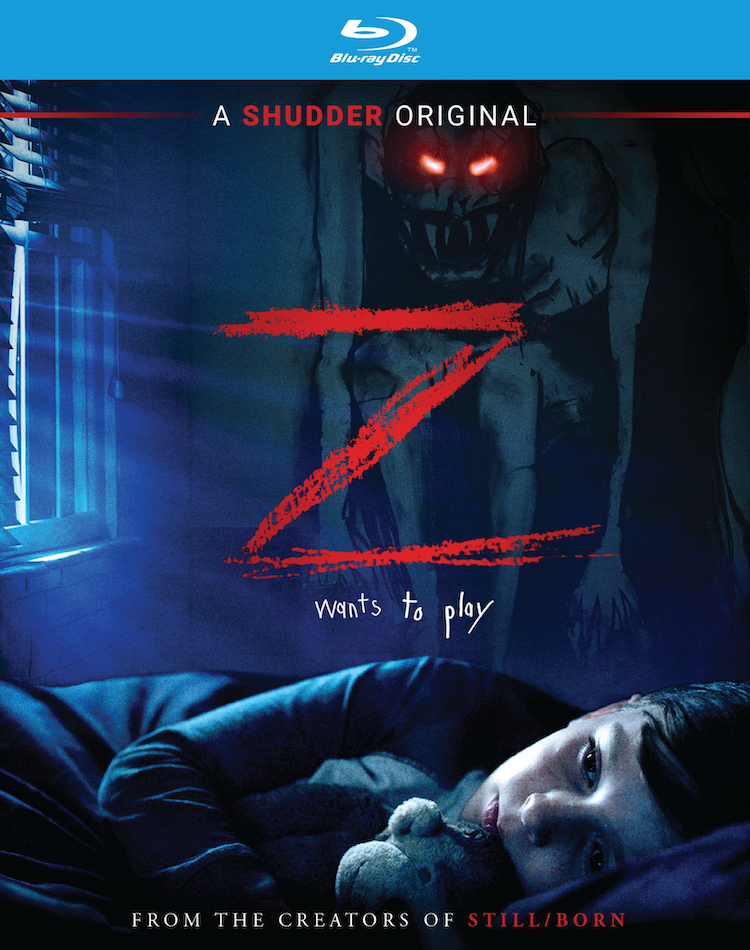