As you may recall, I recently reviewed a short story that Bob Freville published on Godless.com, THE PROUD & THE DUMB, so of course I asked him what we could await from him coming up next. Well, as it turns out we didn't have to wait long at all, as THE FILTHY MARAUDERS is out today on Evil Cookie Publishing! As you know, nothing says Happy St. Patrick's Day like hedonist bikers fighting rats, beavers, and giant chickens. 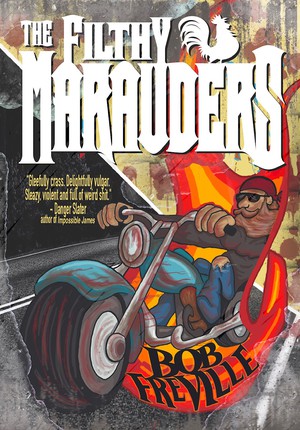 The Filthy Marauders motorcycle club is heading down South to steal some loot, drink some hooch, and have themselves a hoot at the Annual Hilljack Games, but their rivals have another game in mind. After a night of partying hard on the muddy banks of Delacroix County, these surly bikers will find themselves in a sticky situation, as friends and enemies conspire to pit them against a pack of ferocious animals in the grossest bloodsport ever conceived by man.

When he first told me about this book, he described it as "splatterpunk," which is a word I'd heard but wasn't truly familiar with. Oxford languages defines it as "a literary genre characterized by the explicit description of horrific, violent, or pornographic scenes" and after reading THE FILTHY MARAUDERS, I'd say it definitely fits into that category. The Marauders themselves are motorcycle maniacs of the worst sort, whom, for lack of any other characters of note, are the protagonists of this particular tale. We are introduced to them in all of their immoral glory, with brief vignettes of backstory strung in along the way, and soon find them locked in a death trap for the amusement of their enemies. What unfolds is a blood-soaked fight for freedom as many fall to the gauntlet of death thrown their way. The violence is comically over the top, and the victories, though gut-wrenchingly rendered in the poorest of imaginable taste, are sweet, nonetheless. After reading THE FILTHY MARAUDERS, you'll manage to convince yourself that people like this shouldn't and can't exist, though you may look at that biker outside your windshield a little differently at the next stoplight. If you like your fiction free from self-censorship, second-guessing, and language-aversion, you'll appreciate THE FILTHY MARAUDERS for its willingness to go as far as it can to shock you out of your doldrum tedium. Dickens it is not, but the dirtiest of limericks is still poetry, and Bob Freville is a bona fide poet. 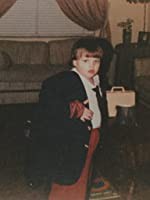 My favorite part of the whole experience are the two short stories included after the novella, itself. Both efficient studies in gross-out humor, "Stuffing" and "The Pink Sock" are lean little adventures that press up to the boundaries of good taste and then plunge through like an index finger through cheap toilet paper. Their titles alone tell you all you need to know, so you've only yourself to blame if you read on and find yourself disgusted. To be fair, Bob warned you, and now so did I.

If you're looking for a little gross treat this holiday, The Evil Cookie Publishing company has you covered with THE FILTHY MARAUDERS, freshly released today and still steaming. Scoop it up with both hands and gobble it down!

Until next time, have a wee dram for me!