BLOOD FROM STONE is a Vampire Flick with Teeth! 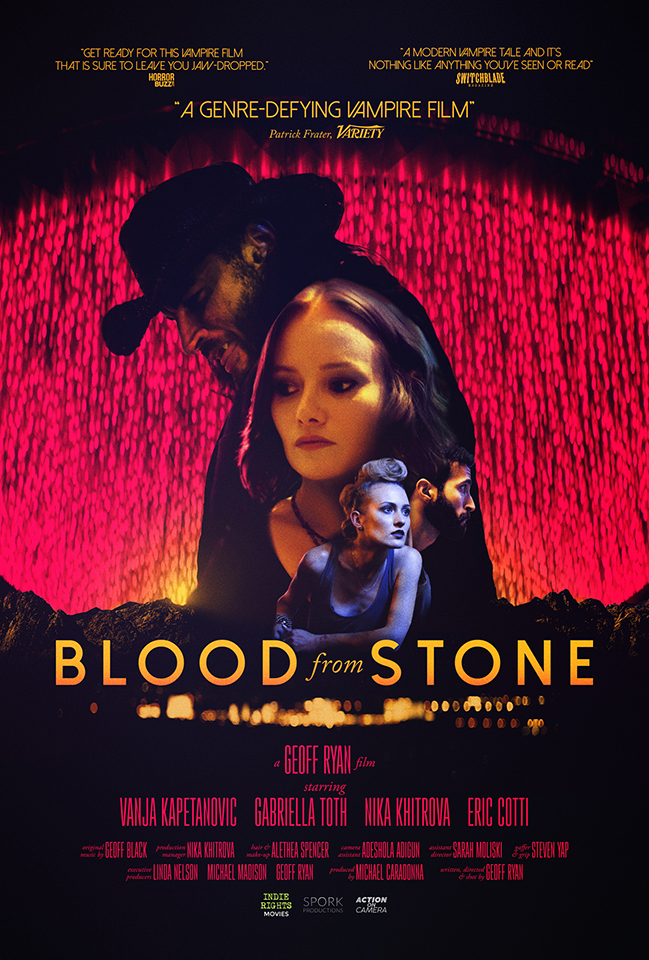 Hey there, fellow horror geeks and monsterphiles! Geoff Ryan's BLOOD FROM STONE is set to release soon, and it looks like an interesting take on the vampire story. Plus, who doesn’t like vampires? (Besides Lycans.) Check out the trailer!

WRITTEN AND DIRECTED BY: GEOFF RYAN

BLOOD FROM STONE starts off great. The beginning doesn't explain what's going on. Instead, it drops you into a scene at a bar, a few friends are out partying, and they meet a man who seems very intent on helping them get wasted. Said stranger invites the four friends out back to do some cocaine, but one declines and stays back. Our stranger quips, "there's always that one guy," and there is. Isn't there?

Things go downhill fast when, after enjoying some of his coke, the man attacks the three and subsequently drinks their blood. It happens fast and brutally. Of course, the fourth friend comes looking for his pals and gets himself killed as well.

This left me with a feeling of intrigue. I needed to know who this party animal vampire was! What was his story, and why did he have all this cocaine to give away? It slows a bit after this to build upon the story and characters but manages to keep things interesting enough to keep you invested.

The stranger turns out to be a vampire named Jure, AKA Joe, played by Vanja Kapetanovic. Vanja is, I shit you not, basically a Serbian Joe Manganiello - and he’s my favorite part of the movie. His nonchalant attitude toward killing, and his way of speaking to his victims, is highly entertaining. The supporting cast does a good job, for the most part, but Vanja is the clear star here.

I won’t give the story away, but what I like about this film, is that it doesn't shy away from the brutality of vampirism. Joe isn't some glittery vampire, full of elegance and grace. No, Joe is a savage, physically intimidating killing machine, obsessed with his next meal and tormented internally.

Overall, I recommend giving BLOOD FROM STONE a watch, especially if you like vampire tales. It’s violent, it’s intriguing, and it has a nice little spin. BLOOD FROM STONE releases world-wide on VOD October 31st! Just in time for Halloween! There will be an advanced screening in L.A. at Cinalounge on October 30th, pandemic permitting!

Until next time, keep on geekin’ on my friends!