Barbarella Roars About THE LION KING! 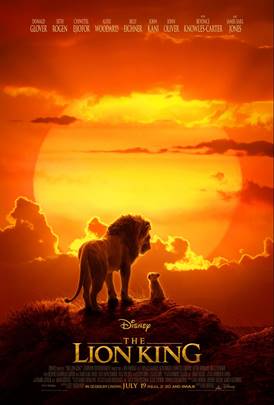 Hakuna Matata y'all, Barbarella here to share some thoughts on Disney’s upcoming release of a new take on an old story.

Disney’s “live action” THE LION KING brings a reimagining of the beloved film to theaters this weekend, and if you’re at all curious about it, I advise you check it out.  I could spend a few paragraphs raving about how watching it in IMAX made me feel as though I were watching highly trained animals hitting their cues phenomenally well. When lions, hyenas and birds started talking, my mind jolted back to the reality that this was just human innovation and technology giving us these magical cinematic moments.  At times, I found myself looking for flaws, and sometimes finding them, but more often than not, paws hitting water or a lion brushing against another looked so incredibly real.  There’s also some dynamic camera work that created a more in-the-moment feel, and the landscapes, full of life, just immersed me into this world.

We could get into a big debate whether or not this should be called “live action” though.  I think it’s a bit crazy to call it that.  I mean, it’s not as though the lions from the cast of ROAR reunited to star in this film.  Just about everything seen has been created through software, technology, and, I assume, hours and hours of manpower.  The visual effects and animation teams did remarkable things here.  Calling it “live action” is a disservice to all those behind the effects.  It’s animation, and we should call it that.

As much as I appreciate the visual accomplishments, I never want visuals at the expense of the story, character development, or emotional impact.  Luckily, THE LION KING has all the elements I wanted.  I didn’t get all misty when any of the main emotional beats hit, but rather, for me, the emotional impact succeeded through its humor.  And the characters who deliver the most laughs are all supporting characters.   There’s a hyena (voiced by Keegan-Michael Key) who just wants his personal space.  Warthog Pumbaa (voiced by Seth Rogan) and Meerkat Timon (voiced by Billy Eichner) bring the majority of laughs and provide at least one quote that I will definitely use in the future.   Another supporting character that leaves a mark is Rafiki, a mandrill (the thing that sort of looks like a baboon).  He holds lion cubs over the edge of a cliff like Michael Jackson once held a baby over a balcony.  Are all the animals who gathered getting excited about a new future king?  No!  They are freaking out because who holds a baby over a cliff?!  John Oliver also makes an appearance, or at least his voice does, as Zazu, but he doesn’t go into a humorous in-depth exposé of what hyenas really get up to.  You’d have to watch him on HBO for that type of thing.

This version of THE LION KING has the familiar songs we know, but these are sung by different, arguably better (in some cases), voices.  Elton John’s “Circle of Life” is sung beautifully by Lindiwe Mkhize.  Beyoncé voices Nala, but oddly, Nala doesn’t sing much, and she doesn’t solo at all.  I’m not sure who thought it’d be a good idea to cast her and not give her more songs.  It seems such a waste of her talent.

I enjoy Donald Glover voicing Simba, and while I wouldn’t have thought of him if I were casting the film, I think it was a great decision and I’m glad casting wasn’t up to me.

I want to mention one last thing before I step away from the computer.  I would caution parents against taking very young kids to see this because some of the fight scenes, while not bloody, are quite intense.  Realistic-looking animal fights with gnashing teeth may not be something the kiddos need to see.  But hey, they’re your kids.  I’m not telling you how to raise them.  I just want you to be aware that there are two fight scenes with lions and hyenas that may be a little too grim for the really young ones.

I hope you have a great weekend everyone.  Barbarella out!