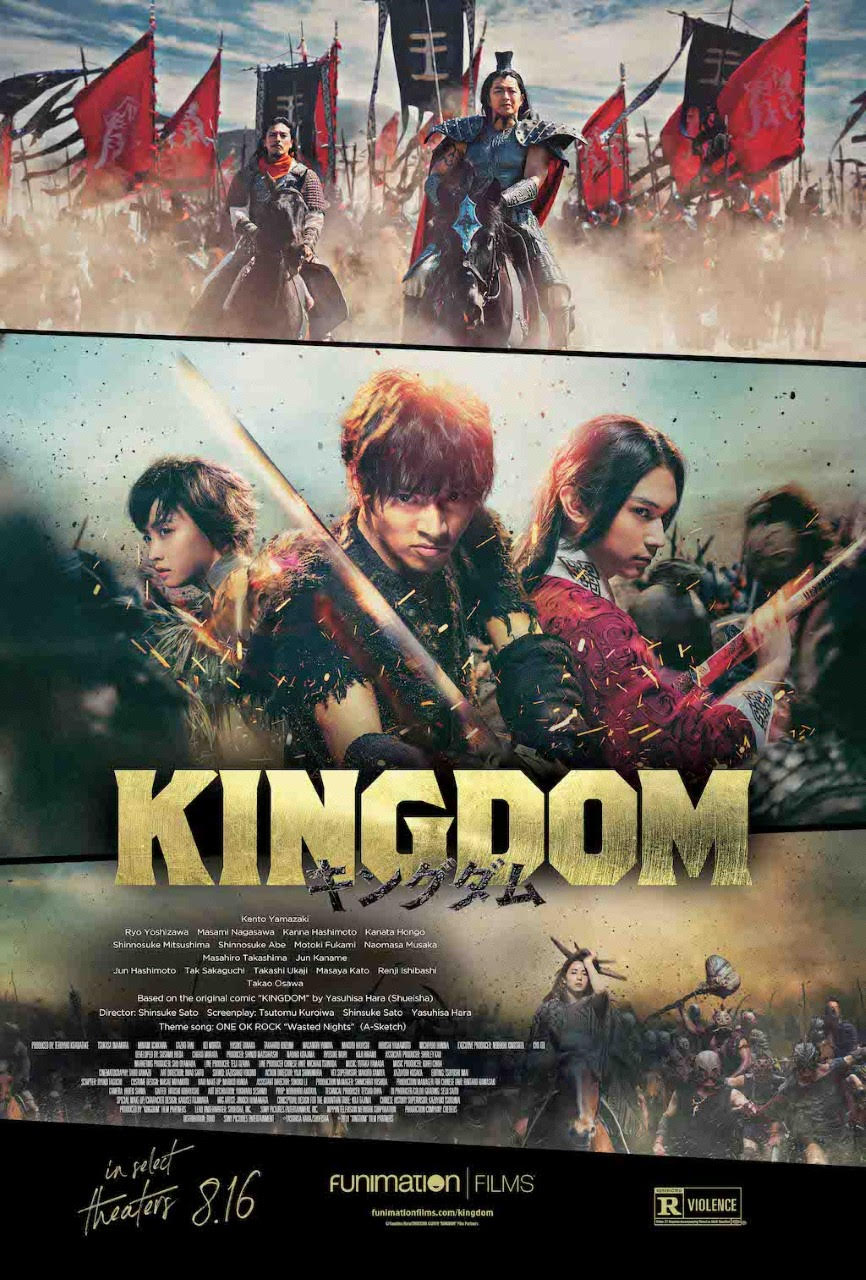 It’s not that I didn’t like KINGDOM, one of Japan’s highest grossing films of 2019.  I really did like it.  It’s that I didn’t love it, and I expected to love it after watching the trailer.  I mean, it looks amazing, right?

The film is pretty great, but I just don’t think it lives up to amazing.  Before I go into why, I should share some information that may have factored into my reaction to it.  As you know, things unrelated to the quality of the film itself can often impact one’s enjoyment of it.  I want you to understand what impacted mine.

First, a film like this needs to be seen on a big screen, and I did not see it on a big screen.  In fact, I saw it on a laptop because the screener I had would not play whenever I tried to cast it to my big-screen television.  I found it difficult to fully engage all my senses when crouched over a small screen on a laptop that doesn’t even have adequate sound.  Seeing it without the glory of stereo or a larger image that would allow me to fully take in and appreciate Taru Kawazu’s beautiful cinematography most likely impacted my reaction to the film.  Had I seen it theatrically, it may have been breathtaking and this review may have had a whole other tone.

Second, and this is always a big one for me, my expectations were incredibly high.  I generally try not to let my excitement for a thing ruin my experience of that thing, but I still allow myself to get all giddy about something upcoming.  Then when I experience it, it almost never lives up to my unrealistic expectations.  I think KINGDOM fell victim to this.  In my defense, the trailer was amazing so I’m just going to blame the film’s marketing for setting my expectations too high.   Okay, let’s talk about the film.

KINGDOM brings to life Yasuhisa Hara’s award-winning manga of the same name in this live-action adaptation directed by Shinsuke Sato (I AM A HERO, THE PRINCESS BLADE).  Taking place in Ancient China during the Warring States Period (475-221 BC), KINGDOM tells the story of two war orphans who long to escape the bonds of slavery and become the world’s greatest generals.

I love a lot about the story, but the film wasn’t without its problems.  I’m all for flashbacks where necessary, but some of the flashbacks were of things that literally just happened.  I think audiences would remember the scene and know why the character reacted the way he did.  Audiences don’t need to be spoon-fed every little motivation for a character’s behavior.  If films keep doing that, people will stop learning how to think analytically altogether.  It’s like how having GPS has impacted people’s ability to navigate.  If you’ve ever seen a teenager whose phone died and is panicked because they absolutely have no idea how to get from where they are to anywhere else at all, then you know how taking away people’s need to think critically will hurt them in the long haul.

The other issue I had with the film was Lin Xin (played by Kento Yamazaki).   Everything he said and did felt so over-the-top.  While that may have been exactly what he was directed to do, it was problematic for me.  I get that he was the rash and quick-tempered guy, and possibly even some version of comic relief, but I simply couldn’t get on board with the character as believable because it was just too much.  Imagine if Jim Carrey played a serious role in a serious film, but he played it exactly like he would play Ace in ACE VENTURA PET DETECTIVE, crazy expressions, loud talking, and all.  At times, Xin did not feel like a real person to me and that bothered me through much of the film.

Aside from that, KINGDOM offers a lot to appreciate.  As I mentioned, it’s beautifully filmed, utilizing everything from gorgeous scenery to effective camera angles to brilliant costumes.  Speaking of costumes, the mountain tribes have interestingly bizarre ones.  They are clearly the Ancient Chinese version of the MAD MAX FURY ROAD characters.  I also really dig the wickedly cool beard that General Wang Qi sports.  Why don’t bearded guys wear their beards in more creative ways like that everywhere?

In addition to the visual elements, the fights look great, and a variety of camera angles enhance the feel of the choreography.  I especially love some of the mountain tribes’ unique fighting techniques.  KINGDOM features some nice wirework as well.  Believe it or not, once upon a time, I thought wirework in martial arts films seemed weird.  I didn’t like it.  But, after seeing so many incredible Hong Kong action films utilizing wires in their fight scenes, I developed an appreciation.  It can be beautiful and compelling to watch people magically drift through the air.

KINGDOM also flows well, not taking too long to set up the next fight or exciting moment.  Another aspect I appreciate about the film is its unique song selection.  KINGDOM features the kind of music not generally associated with period pieces.  I find that refreshing, and I applaud the choices made there.

As I said I really liked the film.  It’s great in a lot of ways, but I expected a masterpiece, and it wasn’t quite that.  Still, it’s probably worth checking out in the theater.  On August 16, KINGDOM gets a limited theatrical release in the US and Canada.  For more information or to get tickets, here’s a link: https://www.funimationfilms.com/movie/kingdom/

Thanks for reading.  I hope you have a great weekend and see some great flicks.