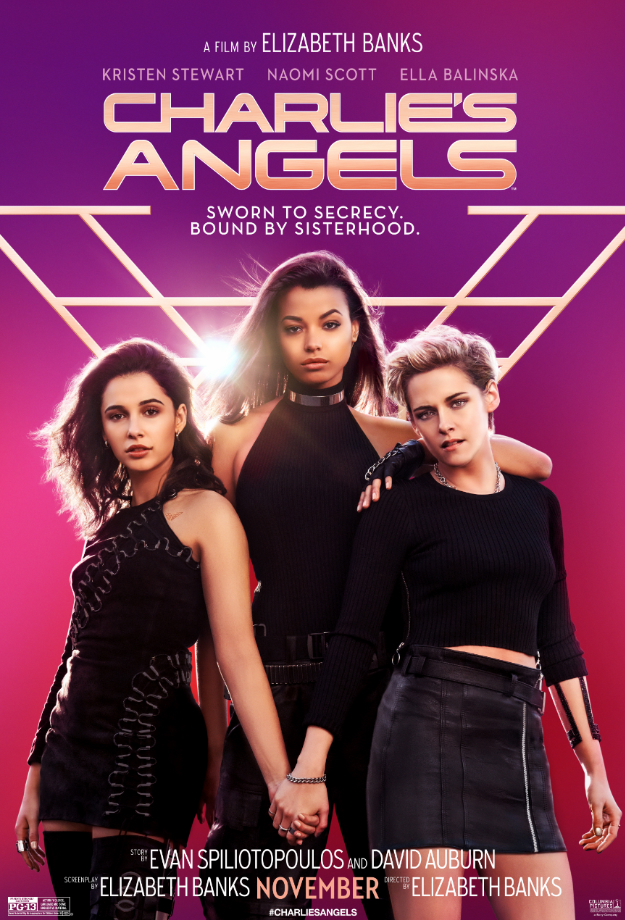 Hey everyone, Barbarella here feeling a little angelic. Okay, not really, but I do want to talk about CHARLIE’S ANGELS. For those of you who remember the last attempt at making a film based off of the television series, I’m sorry.  Around nineteen years ago, Drew Barrymore, Lucy Liu, and Cameron Diaz drew lots of people to the theaters, but left most disappointed.  The filmmakers seemingly targeted the super-hormonal teenage-boy demographic, with lots of scantily clad women doing things really just designed to arouse.  It wasn’t smart or sexy, and I have fortunately managed to erase most of it from memory.

Flash forward to Elizabeth Banks’ CHARLIES ANGELS which is superior to the previous film, although since that one set such an exceptionally low bar, I don’t know how much of a compliment that actually is.  I went into the film after a couple margaritas, which may have led to my enjoying it more than I would’ve otherwise.  I can’t say how much the alcohol and company contributed, but I suspect it factored in somewhat.  I laughed at lines nobody else did, and I wonder if I would have found them funny if I had been completely sober.

I actually appreciate what Elizabeth Banks is trying to do here, although her ideas seem to hide behind the often glossy, magazine vibe I get from the film in general.  Parts of this film flash style and fashion as if flipping through the latest Vogue, and while I appreciate the notion that this is supposed to appeal to women, I’m just not a girl who shops the latest fashions, or even really cares to understand them.  This focus on apparel bugs me somewhat and creates a sense that one is watching a clothing commercial.  It seems a bit pandering to fashionistas, and feels completely unnecessary.

Speaking of unnecessary, there is a ridiculous scene with an angel wasting time trying to pry open a door on a submerged car to get someone out of the back seat.  What makes that unnecessary?  Well, the entire rear window had been shot out only minutes before the car goes into the water.  All I think while watching the scene is, “Why can’t she just swim out the huge gap where the rear window used to be?”  It often boggles my mind when you have so many people collaborating on a film and nobody notices that the entire premise for a sequence is faulty.  There’s absolutely no reason at all a person in a back seat with no rear window has to wait for the door to be opened to escape.   This is not the only gap in logical thought in the film, but if I told you all of them, you wouldn’t want to see the film.  You may not want to see the film now, but it’s not all bad.

For example, I kind of love Kristen Stewart as Sabina.  She displays a quirkiness similar to Kate McKinnon’s Jillian in GHOSTBUSTERS.  Somewhat of a weirdo, her character charms.  Even though I enjoy her character, neither she nor any of the other angels feel particularly real to me.  I get that these angels are supposed to be a special breed, but they don’t feel like real women the way the television show’s angels did.  That’s a problem.

Another problem stems from Elizabeth Banks apparent effort to unite women using a global scope.  I like the idea of a global sisterhood, but I don’t need that idea crammed down my throat periodically throughout the entire film.  At times, it feels like this is just another way to pit women against men, and do we really need more of that?

If it is really men against women, I think the men win because their characters feel a little more real to me than the female characters.   It may have to do with the fact that I love a lot of the actors that were cast. The inclusion of everyone from Patrick Stewart to Noah Centineo delights me.

While it offers some fun content and surprises, if you’re a person who only sees a film in the theater a few times a year, this probably isn’t one you’ll want to catch, unless you want to see all the pretty clothes in cinematic glory.  I had fun with it, but great company and cocktails make a lot of things fun that might not be otherwise.