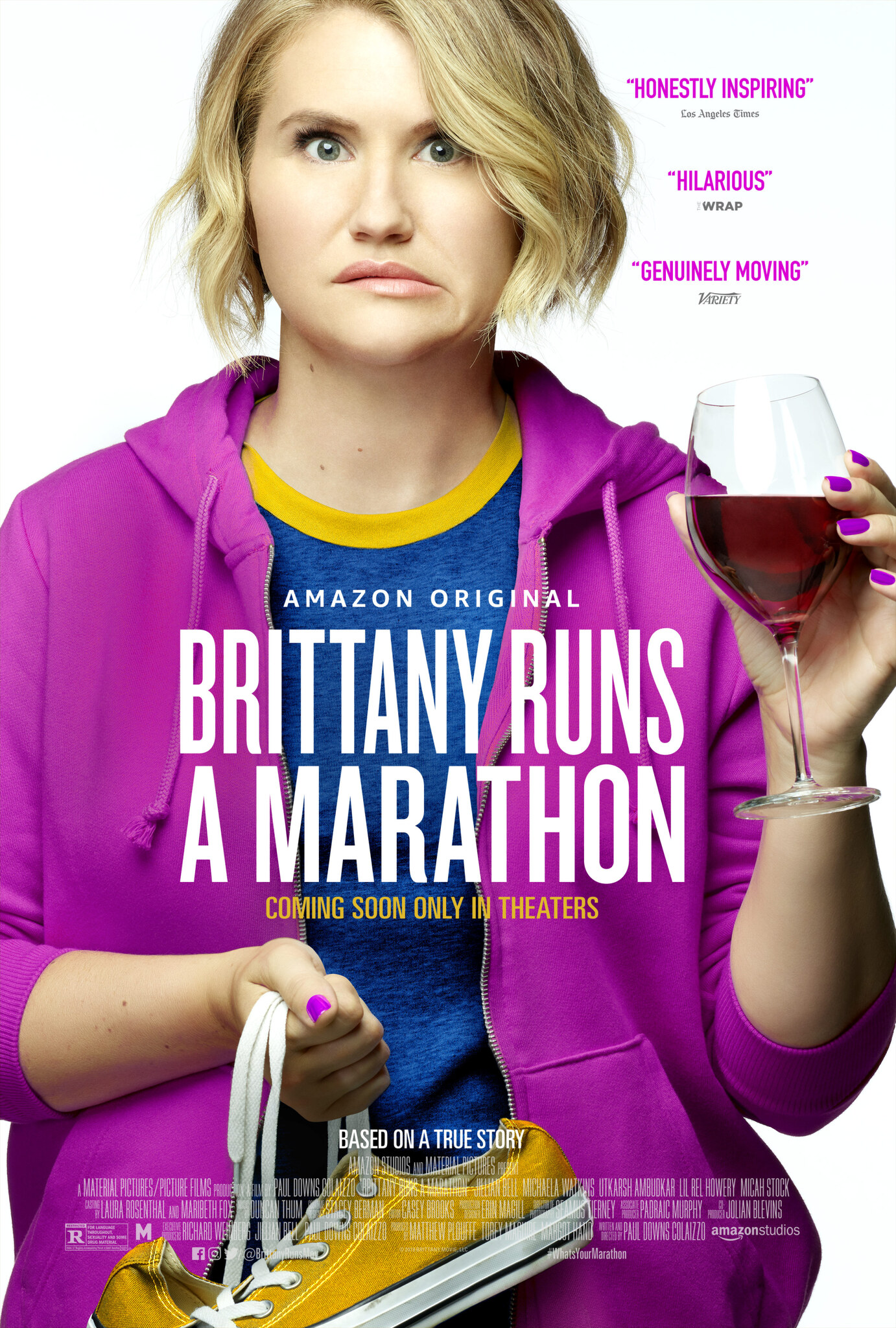 Barbarella here contemplating how long it’s been since I’ve donned a pair of running shoes and hit the trails.  After much abuse on my knees, I stopped running years ago at the recommendation of my doctor.  I miss it, and watching anything about running often makes me a little sad.  Luckily for me, BRITTANY RUNS A MARATHON isn’t a movie about running.  I mean, not really.  It’s about self-discovery and the struggle of changing.  Award-winning playwright Paul Downs Colaizzo creates something insightful here with his directorial debut.  Written by him, the story infuses humor as it picks at the scabs of those emotional injuries that we endure, the most painful being the ones we inflict on ourselves.

When a doctor informs party-girl Brittany that she needs to lose a substantial amount of weight for health reasons, she must decide how seriously to take the diagnosis and his recommendations.  She had only gone to see him in an attempt to get a drug prescription, after all.  Self-medicating is her go-to way of dealing with her issues.  However, that’s all about to change.  If you somehow didn’t gather from the title, she decides to train for and run in the New York City Marathon.  She reaches this decision gradually, and what happens along the way proves far more interesting than the outcome spoiled by the title.

When we first meet Brittany, she comes across as if she desperately wants to be Rebel Wilson.  Yet she takes her comedic jabs in a more abrasive manner, which makes her far less likable than someone like Fat Amy.  However, Brittany doesn’t have just one mode, and as we begin to discover what makes her tick, her behavior makes far more sense.  Actress Jillian Bell (22 JUMP STREET) expertly navigates Brittany’s nuances and extremes as Brittany faces a variety of challenges while battling her insecurities and the scale.  At times she’s relatable and likable, but at times she’s that annoying person with whom you can’t stand to be.  This is a film that addresses change and its consequences, both anticipated and unexpected.  It challenges first impressions, and although the characters aren’t necessarily deep, it still reminds us that people and relationships are complicated.

BRITTANY RUNS A MARATHON starts off a little clunky, but once it hits its stride, it’s an entertaining jaunt.  While the main plot points are easily predictable, the film gets its potency from delving into Brittany’s mindset.   I expect that many people, particularly women in their mid-twenties, may relate to her in one way or another.  Obsessing about one’s weight, searching for a relationship online, and not having a clear path towards one’s future can be things most have encountered at one point or another.  Her experiences involving these areas make her far more relatable to the masses than her experiences training for and running in a marathon.  The meat of the story centers around exposing her flaws.  Both comical and tragic, her story feels authentic.

Some of the supporting characters induce some laugh-out-loud reactions, but none of the characters are particularly well-developed.  That may very well be intentional, as this is Brittany’s story, and spending too much time on other people would only detract from the introspective quality of the film.  We learn so much about how Brittany thinks and feels through the way she reacts and communicates in a variety of circumstances.  I appreciate learning about her in this manner and not through a series of voiceovers.

While I didn’t leave the theater with anything resembling a runner’s high, I certainly enjoyed my time spent with Brittany and her friends and family.  Witnessing her journey proved entertaining, thought-provoking, and even a little inspiring.  Don’t’ get me wrong.  I’m not going to go out and run a marathon – I already did that once – but it did get me thinking about making a few minor changes.