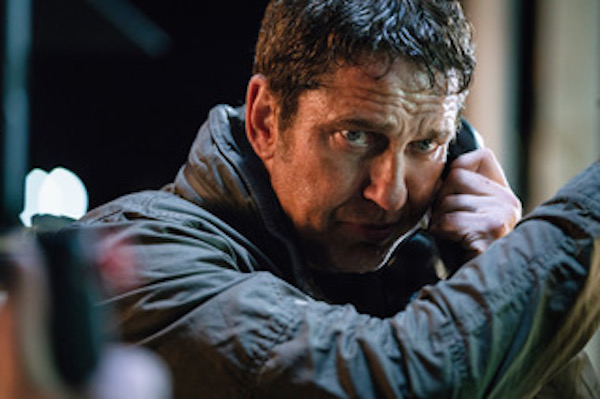 Hey everybody!  Barbarella here, and I just saw ANGEL HAS FALLEN.  In it, Gerard Butler plays Mike Banning, a secret service agent who gets framed for an assassination attempt on the president.  If you’re looking for something realistic, skip this one; it’s ridiculous.  If you’re looking for something fun, definitely don’t miss this one; it’s ridiculous.

The film wastes no time getting into the action with an opening scene containing handheld footage.  Unfortunately, it’s shot too closely to really be able to see much of anything transpiring.  I’m not against handheld camera work, but I would prefer it in shorter bursts, or done in a way that I can at least tell who’s doing what.  The sequence is choppy, frenetically edited, and a little annoying to watch.  Based on this as a first impression, I worry the film isn’t for me.

The introduction to some character backstory doesn’t do much to alleviate my concerns.  We get to learn a little about Mike, his friends and family, and the president, who is played by Morgan Freeman.  ANGEL HAS FALLEN credits Robert Mark Kamen, Matt Cook, and Ric Roman Waugh for writing the screenplay.  Most of the storyline offers nothing too atypical for this type of film.  There’s an investigation and a manhunt.  We’ve seen most of this type of thing play out in any number of films covering wrongfully accused people or presidential security detail.

Having seen Ric Roman Waugh’s SHOT CALLER starring Nicolaj Coster-Waldau, I expected more interesting characters overall, but ANGEL HAS FALLEN gives us mostly clichés, which in turn makes the film a lot more predictable.  I do love aspects of Mike Banning, particularly some physical ailments with which he deals.  They make him feel more like a real person and less like some kind of superhuman agent, so I appreciate that.   I also find one character so enjoyable that I don’t mind the pitfalls elsewhere.  Played by Nick Nolte, he doesn’t appear until midway through the film, but when he does, it really turns up the enjoyment factor.

While the story isn’t particularly special, the action generally is.  Although we have more close shots using the handheld camera, most work really well, with only a couple bothering me like the opening scene did.  In addition to shooting and fighting, we now get explosions.  This is the stuff that brings me joy.  I’m generally a gal who prefers fight sequences to pyrotechnics, but this film showcases some rather spectacular explosions, and lots of them.  I believe explosions must be like the stress dolls for filmmakers, so I assume Ric Roman Waugh’s been stressed and really needed to blow some stuff up.  He blows up so much stuff, which is part of the reason I find ANGEL HAS FALLEN as much fun as I do.

As I said, it’s ridiculous and at times over-the-top, but sometimes that’s exactly what you want in a film.  It often feels like the story tries to exist in the realm of realism, but the action doesn’t seem to let it.  Sometimes a scene would pull me right out of the moment.  For example, I had an issue when investigators walk among a number of bodies that appear to still be intact after being in an explosion.  I would have expected mostly body parts and unrecognizable bits strewn about.  I understand that when the goal is to make a fun film, it’s probably a smart move to avoid venturing into the gruesome territory of a more realistic aftermath.   Still, it makes me wonder who these people are that could blow up and still look pretty much the same as before with just a few burns, and a little more dirt, ash, and blood on their faces.

Despite my criticisms here, ANGEL HAS FALLEN is legitimately entertaining.  As long as you’re not looking for a deeply substantive story or a lot of surprises, it’s a really fun time in the theater.  We all need a little fun these days, so maybe go in expecting to not think too much and just have a good time.  If you do see it this weekend, be sure to stick around for the mid-credit scene.  It’s pretty funny.