I have to start with a small confession, and I’m embarrassed to say this but it hit me like a ton of bricks when their names lit up the screen: I had forgotten about Don Simpson and Jerry Bruckheimer.

I was a young man when BAD BOYS came out in 1995, and I loved it. I had been a fan of Will Smith since before his television days, when he was still just a rapper. Martin Lawrence was one of the biggest comedians in the world, and I loved his television show “Martin” as well. (My favorite episode is the one where he won the lottery and got all big in the head only to discover that multiple tickets had won that particular drawing and his cut was nominal, at best.) The two actors leapt to the big screen with explosive energy and true chemistry, filling the buddy-cop action-comedy roles as though they were born to do so. I do have one nagging complaint, though, that has surfaced in the years since the film’s initial release.

Forgive my tangent here, but I’ve been given a soap box and this has been bothering me for years, so here I go: every frame in a film is important, and expensive, so it should serve the greater film. Ideally, it should serve the story, but at the very least it should garner some kind of reaction from the viewer, be it shock or laughter or any varied form of titillation. There is a scene in the original BAD BOYS that does no such thing and I demand to know why it’s there.

At the beginning of the third act, the villain, Fouchet, is threatening his lead chemist because he’s “fucking with [my] time table.” He’s asking why the drugs are taking so long to cook, and the chemist responds by saying the humidity in the room is too high and the chemical processes are affected. The camera cuts to a punk tech in the corner who exclaims, in a rather timely Keanu impression “Yeah, it’s totally fucked.” Camera back to Fouchet who snaps “You shut up!” and then it goes BACK to the tech punk who wiggles and shakes in embarrassment as he scolds himself under his breath. 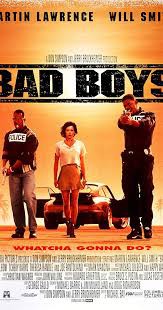 What the fuck was that? Who is that guy? Who is he fucking? What does he have on Michael Bay? I want to know; it bothers me. It fucking bothers me!

Phew! Thank you for indulging me that. Moving on.

BAD BOYS II hits in 2003, which at the time was a long gap between a successful film and its sequel, though similar long gaps would soon become the norm as Hollywood ran out of ideas and found itself streaking back to the well for revenue. Though I loved the original, I liked the follow-up. (Michael Bay’s cameo was a delight, and I would never scoff at the opportunity to see Gabrielle Union (BRING IT ON) do anything.) The sequel saw the two coming back to the franchise that made them bankable stars after each achieving success of their own since. Smith returned as an actor of gravitas, having secured an Academy Award nomination in the interim. However it seemed Lawrence’s character, Marcus Burnett, was given the most growth to work with as he started down a spiritual path of personal betterment in light of his relationship with thrill-junkie and eternal playboy Mike Lowrey. Whereas the first film used Lowrey’s bachelorhood as a major plot device, in the second it served as a lead weight, minimizing his personal risk and driving a wedge between the buddy cops’ romance. I liken it to Martin Riggs’ disregard for his own life between LETHAL WEAPON and LETHAL WEAPON 2.

With that comparison in mind, we now come to BAD BOYS III, or BAD BOYS FOR LIFE. As a film-conscious viewer who has seen LETHAL WEAPON 3, and understands why there is no LAST BOY SCOUT 2 or 48HRS, PART 3: YET ANOTHER 48HRS, I was anxious going into this film. To see that the directorial duties had been passed off to a new duo, Adil El Arbi and Bilall Fallah, was curiouser. I had never heard of them before, and a little research shows that they’ve made a few successful films and a couple of episodes of the acclaimed series “Snowfall”, but after seeing the film I can see that they are graduates of the Michael Bay School of Directing. With Honors.

While this film does openly and repeatedly reference the aging of its leads (the film opens with Marcus becoming a grandfather, resurging his spiritual awakening and rediscovering his Christian faith), it is much more glib about it than LETHAL WEAPON 3, and relies on none of its consequential characters to extend its life as a franchise. (Sorry, Pesci; we love you in THE IRISHMAN, but we’d had enough Leo Getz by the end of LW2.) No sign of Union, Imperioli’s JoJo the Tire Guy, or Leoni. Joe Pantoliano (BOUND) is back as their put-upon Captain Howard, and Theresa Randle (SPAWN) returns as Theresa Burnett, and we even get Reggie back from his brief appearance in the sequel (one of the standout comedic moments of that installment), but the core focus is once again the titular Bad Boys. This time around, again, Burnett is making a plea for them to be “Good Men”, to varying degrees of success. 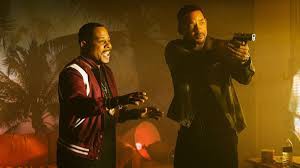 This film ticks all the boxes of the buddy-cop genre, and this franchise particularly, with the family man’s values clashing with the playboy’s emulation of all things youthful and careless, the casual profanity, the wanton disregard for human corpses, the copious amount of bullets, and the flaccid threat of bureaucracy interfering with our principles’ need to get the job done no matter the cost. (Seriously, you can’t stop a Bad Boy from being a bad boy.) Adil and Bilall have borrowed many camera angles, tricks, edits, and framing from Bay, who appears once more in a cameo that lit up the audience in attendance.

What this installment does differently is give Lowrey a bit of room to stretch and grow, and adds another layer of gravity to the overall proceedings. There are true stakes in this film; actual mortality, whereas the others felt a tad more BOONDOCK SAINTS in terms of the leads’ eternal nature. This go around, we believe we could lose a Bad Boy. This could actually be the last ride. Much in the way STAR WARS: THE RISE OF SKYWALKER had an opportunity to really button up the franchise and take some huge risks, BAD BOYS FOR LIFE feels like a film where literally anything can happen. And unlike STAR WARS IX, things actually do.

The best thing going for this film is its villains. Fouchet and his longer, yet paler shadow, Tapias, were paper tigers. The latter was given a sliver of dimension by having a daughter he cared for, but they were otherwise target silhouettes on the Bad Boys’ shooting range. This time, we have real villains with real motivations and personal connections to the principles. They are flawed, intelligent, and intimidating. By giving them further dimensions the filmmakers were also able to blur the lines of the narrative, establishing redeemable foes that could attribute their darkness to the misdeeds of our heroes. It’s a challenging dichotomy that this franchise hadn’t seen before and it elevates the drama of the story above its predecessors.

Which is not to say that this film isn’t a fun action romp, because it is. If you appreciated the first two films in this series, you will enjoy this movie. I know I did. I saw it in a packed theater and everyone was having a great time. Everything you’re expecting is here, but in a good way: car chases, investigative mishaps, gunplay, fistfights, a gigantic third act gunfight with explosions aplenty, and no shortage of cursing and laughter. Some new cast members have been brought in to excellent use, particularly Alexander Ludwig (THE HUNGER GAMES, TV’s “Vikings”) as “the guy in the chair” who realizes his full potential in the third act to crowd acclaim. 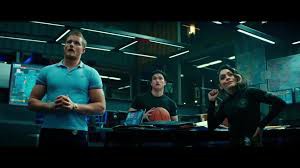 For drawbacks, I will say I missed Trevor Rabin’s score and the classic “Bad Boys Theme”, as well as the early influence of West Coast Hip Hop throughout the original. (I know the film is set in Miami; no one said it had to make sense.) DJ Khaled serves as musical director, and also has a cameo in the film. This is where I’d complain about a flash-in-the-pan stepping in and firmly placing the film in a time frame, but let’s be honest: It’s BAD BOYS. We’re not concerned about its longevity. And to his credit, he doesn’t insist on being a badass in his small role; it’s actually quite emasculating. So good on you, Khaled.

To be true, quite a bit of this film is fan service, but fuck it; I’m a fan, so Thank You for Your Service. I had a great time watching this film, and if Smith and Lawrence are truly Bad Boys for Life, than I expect to see them again, as this film has proven that there is plenty of life left in these Bad Boys.

BAD BOYS FOR LIFE opens in theaters tonight across the country.