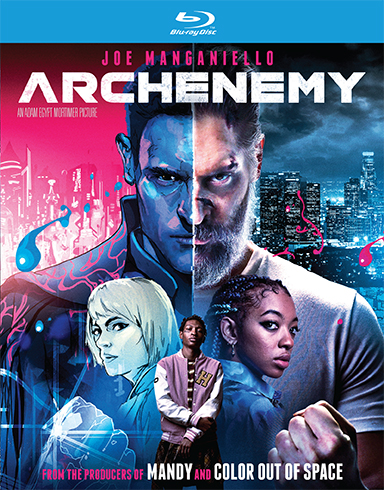 Who wants to see the producers of MANDY and COLOR OUT OF SPACE take their turn in the superhero genre? Me! Me!

ARCHENEMY follows “Max Fist (Joe Manganiello) is a local drunk who claims to be a superhero from the planet Chromium. He tells anyone who will listen that he was pulled into a wormhole, falling through time and space, and dropped to earth without any of his powers. No one pays any attention to Max except a teenager named Hamster (Skylan Brooks) who can’t get enough of Max’s stories. When Hamster and his sister (Zolee Griggs) get in trouble with a vicious drug syndicate led by The Manager (Glenn Howerton), Max takes to the streets as a brutal vigilante hellbent on proving himself as the hero no one believes him to be.”

This one looks like a blast! Who doesn’t love a good story about a down-and-out superhero who teams up with a couple kids to kick some ass? If you’d like to check out ARCHENEMY and own a Blu-ray copy for your own library, email me at annetteaicn@gmail with the subject line I WANT TO BE ANNETTE’s ARCHENEMY! Please include your mailing address in the email. Continental U.S. residents only. Winners will be chosen randomly by 2/10 at noon. Good luck!