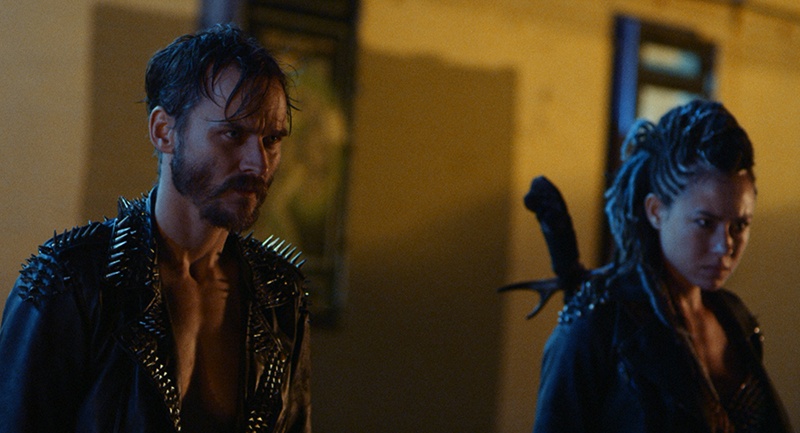 I am in love with the current crop of simple yet wildly violent throwback films to hit screens over the past few years. Harkening back to a grind house-like vibe, recent skull crunchers like BONE TOMAHAWK and BRAWL IN CELL BLOCK 99 have recaptured that hardcore B level grit in a shiny new A+ caliber. Though not all of these films manage to hit it completely out of the park, I appreciate stories that are unapologetically dark and even a bit on the mean side. With a subtle nostalgic Cannon-ish tone and brooding visuals (brought to us by the producers of TOMAHAWK and BRAWL), Joe Begos' VFW is another worthy addition to this current renaissance in genre fare.

VFW takes place at- you guessed it- the local Veterans of Foreign War post that has survived decades in the face of sprawling urban decay. Fred (Stephen Lang) runs the joint where he is joined nightly by the same ragtag group of fellow veterans. There’s the lovable drunk (William Sadler), the silver-tongued used car salesman (Martin Kove), and the slightly unhinged total badass (Fred Williamson) among others. When a troubled teen takes refuge in the men’s clubhouse, they unexpectedly find themselves defending their turf against a group of drug-addled homicidal thugs.

From the get go director Joe Begos sets the bloody scene with a series of hyper violent kills- and that’s before the bad guys even begin their siege. So when battle commences, be assured that Begos doesn’t hold back on the increasingly splattery fun. This is the type of film where the violence carefully straddles that thin line between horrific and ridiculous, thankfully emerging as much more than just schlock.

As yet another recent project to feature a synth-heavy music I was delighted by the overall versatility of composer Steve Moore’s score. There’s a lot going on visually in VFW, and Moore manages to punctuate different chapters while still maintaining that menacing Carpenter-esque vibe throughout.

The casting in VFW could not be more solid. As if seeing such legends sitting around chewing up the screen and playing off one another isn’t fun enough, we also get to see the relative old-timers kicking total ass together. As they each take their individual knocks (literal and figurative) through the developing story, each actor has a chance to really show their stuff, endearing themselves to the audience even more. So when the shit seriously hits the fan, you are truly rooting for the group of aging heroes who have never forgotten the meaning of true honor.

It just so happens the context for all of this sensitive yet macho ensemble goodness is a balls to the walls blood soaked siege. I need to see the film again just to get an accurate kill count, because it is a total bloodbath, and as the ante amps up, the assaults become increasingly innovative and brutal. While Begos dark palate no doubt aids in pulling off some of the more complex gags, special effects Bob Trevino and his team are very successful in making the gorey stuff gruesomely authentic.

Kudos to writers Max Brallier, Matthew McArdle as well as Begos for crafting a story that so cleverly melds such craziness with a truly heartfelt story. While VFW is miles away from highbrow cinema, sometimes a bit of unrestrained  fury among honorable men is just as worthy as the award winners.

No word yet on a release for VFW, but you should most definitely be on the lookout for this one on a screen near you soon!