Barbarella Enjoys Chatting with Annabelle Wallis About THE SILENCING

Barbarella here to share another brief chat I had with a talented actor.  Have you ever spoken with someone, and right off the bat, you think how much fun you would have just hanging out with that person?  That’s how I felt speaking with Annabelle Wallis.  Immediately, her playful nature became apparent in her tone as she addressed my questions.

You may be familiar with Annabelle through her television roles of Grace Burgess in the BBC series, PEAKY BLINDERS or Jane Seymour in Showtime’s THE TUDORS.  Perhaps, you remember her from THE MUMMY, ANNABELLE, or one of the other movies in which she’s performed.  Her latest undertaking, THE SILENCING, comes out in theaters and on VOD and Digital this Friday, August 14.  In the film, a reformed hunter becomes involved in a dangerous game of cat and mouse when he and the local sheriff cross paths in their search for a serial killer who may have kidnapped his daughter years prior. 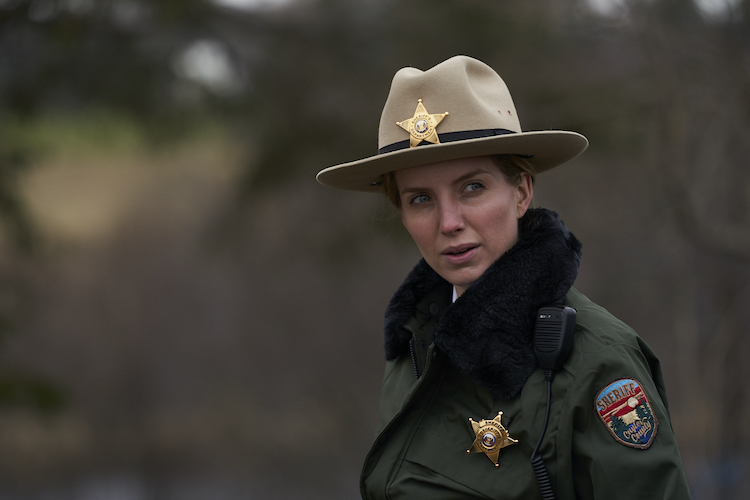 What first inspired you to go into acting?

“You know, for me it was such an instinctual choice.  It was like there was nothing else for me.  I remember seeing Billy Connolly, the comedian, and it was an interview, and someone said, “What would you do if you didn’t act and do comedy?”  And he looked at them like they were speaking Chinese, and I was like, “That’s it!  I get that.  I get that.  Oh, there’s nothing else for me.” So, I guess I just kind of always knew it was going to be very hard to do, but you know, that was all that was meant for me, so I went and tried it out.”

And it worked out very well for you.

In 2015 you won the highly coveted “Best Scared as Shit Performance” at the MTV Movie and TV Awards.  What was it like winning that award, and do you have it displayed in your house?

“Well, I think I was very shocked. ANNABELLE, we made that movie for $5 million, and it was like us and GONE GIRL at the box office.  It was only by a margin that GONE GIRL beat us, and so it was all really such a mind-blowing – kind of like, “Oh wow, I can’t believe that happened.”  Just to win that award, I was like, “I must have quite an annoying face because people really must enjoy me being completely petrified.”  That’s what I thought.  But I have it in my house, and it’s a pretty funny one to explain to people.”

How did an award-winning actor such as yourself get involved with the independent film, THE SILENCING?

“Well you know, I had just come off THE LOUDEST VOICE.  I had played a Fox News staffer who was sexually abused by Roger Ailes, and I found that it was such a great character to play, then I got sent THE SILENCING.  You know, I love foreign films, and I love [Robin Pront’s] film THE ARDENNES, and I read [the script], and I thought this is something like – when do you get to play a sheriff? I love that she is wholly different to a character I just played.  I love that he (Robin Pront) is a foreigner coming to do his first English-language movie, and the idea of opportunity and wanting him to have the opportunity to come and do that.  And it was just such a great script.  I love a thriller, so that was it.  That was how it happened.” 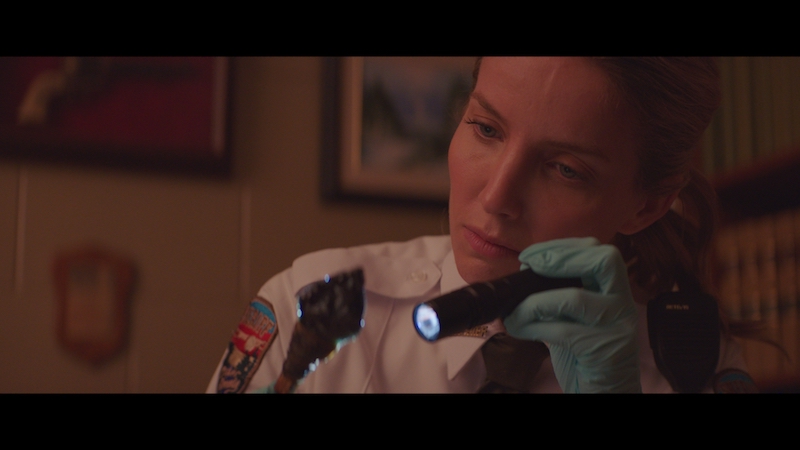 What appealed most to you about the script?

“I love the flawed characters.   I love that there isn’t a classical hero, per se.  I love that the female character is equally as flawed as the male, and that the decisions that she makes are ones that I found really truthful.  I think all humans when confronted with overwhelming pressures in life make very bad decisions, and then it’s how you redeem yourself.  I’m all about kind of trying to push the boat out with where the audience will go with you.

“The scenes, as well, which I think are really important.  You’re presented with this mining town, and the opioid addiction, it’s rampant.  There were so many amazing scenes that I thought were really important to show on screen, and it felt like a forgotten part of America, which is a very real part of America.  I think you have more than forty-million people here under the poverty line. So, I like the setting in an America you don’t see often.  Yeah, so that’s why.  There you go.  Long answer.”

What do you feel is the most important thing to know about Sheriff Gustafson, and how did you prepare for the role to ensure that you adequately conveyed that?

“I guess the thing that I learned about her was that she didn’t have to explain herself.   I feel like I’m so fed up of reading scripts and having female protagonists overly explain why they need to make a decision or why they are there.  I love the stillness in her.  I love that she’s not trying to please, she’s not trying to even please the audience.  That was a real risk.   I don’t know if I got away with it.  I’m a bit like, “Ooh, she’s a bit uptight.”   I just found that was her truth. There’s a deep-rooted sadness, I think, that is the through-line to the audience.   When you have deep shame or deep upset in your life, you kind of go inward, you go quiet and then she starts to erupt.  So, yeah, did I answer your question?  I don’t know.”

Yeah, how did you prepare for that role?

“Ah yes.  Well, I did an American accent.   I did a lot of research.  I had to learn about the way sheriffs do this.  And gun training.  You know, we were out in Northern Canada.   I went out there early to get kind of a sense of the place, and it is a mining town, and it does have an opioid addiction, so I was just kind of immersed in the reality of what it is to live in a place like that.  You’re not waking up and skipping out in the street.  It’s heavy.  The weather is heavy.  The environment is heavy.  These are people who are oppressed, not only in societal terms, but are oppressed by nature, and so yeah, that’s how I prepared.  But really, I was trying to focus on stillness.  There’s something about when an actor is very still, and again I don’t know if I got away with it. I just loved the power that you can convey with very little.  That’s how I prepared.”

Do you think Sheriff Alice Gustafson is good at her job? Why or why not?

“I think she wants to be good at her job.  I think she’s probably bit off a little more than she can chew, but she’s not going to let anyone know about that.  I think that she is willed by the desire to do good, and that means that everything she does and tries to do is for the right reason. I think that’s very important, but clearly she stumbles, not in her job, but in her emotional self because of the circumstances she’s put under, and then how she tries to build it back up again.  I think it’s important, as well, to shine a light on the power that you have in that position, whether you agree with it or not, whether I agreed with it or not.  The decision-making that she puts herself under applies to being good at your job, if that makes any sense.”

While I don’t know that I agree that Sheriff Gustafson is good at her job, I do know that I enjoyed the brief time I spent talking with Annabelle Wallis.  You can see her as Sheriff Gustafson and decide for yourself.   THE SILENCING, also starring Nikolaj Coster-Waldau, comes out in theaters and on VOD and Digital tomorrow, August 14. 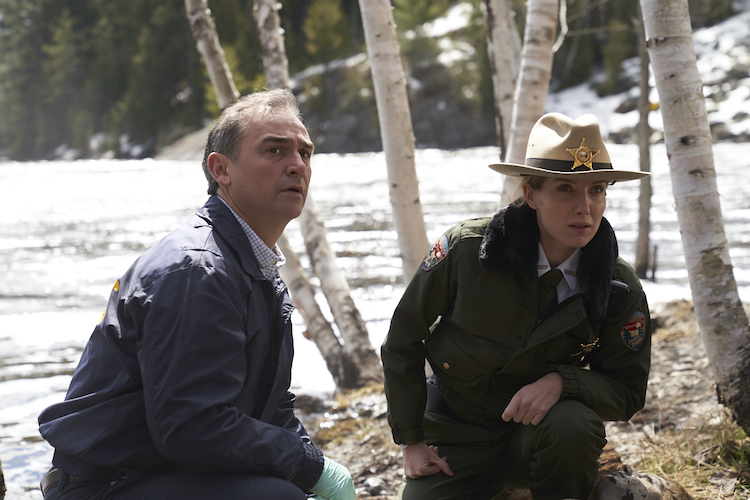