Howdy, y’all! McEric here with a review of the new horror film ALONG CAME THE DEVIL II. Check out the trailer:

The film continues the story from the first film, following the demonic possession of members of the Winbourne family and the horror unleashed upon the small town in which they reside. Mark Ashworth (THE MAGNIFICENT SEVEN) is the true standout in the cast, evoking sympathy and terror throughout the film’s runtime. 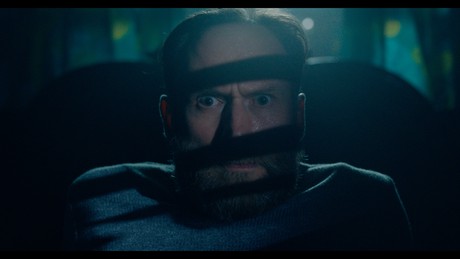 I had the chance to chat with returning castmember Bruce Davison (X-MEN, TV’s “Harry and the Hendersons”) about his role as Father Michael and working with the whole Devan Clan.

Eric McClanahan: Good morning, Bruce. How are you today?

EM: I’m well thank you. I just finished watching ALONG CAME THE DEVIL II and I have to admit I had not seen the first one, however I was easily able to infer what occurred in the first film, and I’ve got to say right off the bat: looking at the ending, I think we’re set up for a third.

BD: [laughs] Well, we’ll see about that. I don’t know – I haven’t seen the film. I’m kind of weird. I have a tendency not to watch what I do anymore, for the most part. It’s just weird.

EM: Now, why do you think that is? Are you just too busy?

BD: Well it just comes from doing so much all the time and just getting old. I just remember Katherine Hepburn saying “No one wants to see themselves rot.”

EM: That’s fair. So speaking of getting older, you’ve been in the industry for over fifty years, you’ve had such a storied career. I’m seeing a lot of horror films recently; is that a passion of yours?

BD: Well you know I always loved Vincent Price (HOUSE ON HAUNTED HILL, THE RAVEN). I loved him in his later years when he took on that mantle. I got to meet him at Roddy McDowall’s (PLANET OF THE APES) house one time and spent some time with him. He’s the sweetest man. He said he loved doing that more than anything – all the Hammer Films and stuff. He said he really enjoyed that and I thought about that often and when the opportunities have come along I just think about having the opportunities that Vincent did at that time of his life.

EM: So, tell me about what you bring to your character, Father Michael, in the ALONG CAME THE DEVIL films.

BD: Oh Gosh, I don’t know what I bring to him more than being the mystery of the religious connection to this film. Father Michael, does he know what he’s doing? Do we believe in him? Is he a psychopath? Is there something else going on? I get the feeling that maybe, at some point, I thought that this was all in his twisted mind. That’s another way to look at it. But, you know, it’s this interesting, typical character of the exorcist going after the demon, and he’s just sort of the tennis net.

EM: I noticed the scenes where he has conversations with the upper-class clergy did seem rather one-sided; like, did that even happen?

BD: Right? They could play as though he’s talking to himself.

BD: I did too. Like I said, I don’t know which way they went with the end of the film but that was part of what I was trying to do with him, to dance with him, while working on it. I love doing little independent films. They’re really fun and creative in a way that with the bigger ones you don’t get an opportunity to do. When you’re caught in the corporate structure. With the little ones you can wing it and come up with stuff. I always thought that Father Michael, or Reverend Michael, should be a mystery. 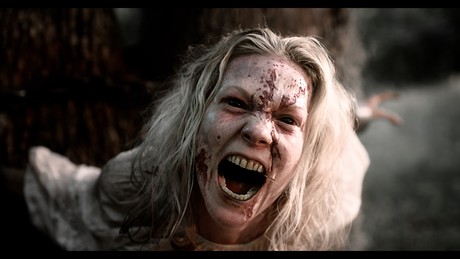 EM: Yeah, I think with these Independent Films there’s so much more creativity because there has to be.

BD: Yeah. It’s kind of like in the fifties when these people used to make one-hit-wonder records in their garages, you know? You could be Jan & Dean. The opportunities are so great now with these open markets. There’s a lot more opportunities to do stuff and some succeed, some fail; it’s sort of a Wild West right now.

EM: I agree. With the advent of digital film, that cuts the cost of filmmaking by almost 75% so, literally, just about anyone can make a movie. It helps if they get good talent, as in this case.

BD: Well, that’s the trick, isn’t it? Finding stuff that works. You throw enough stuff against the wall, you know… They say a million monkeys, a billion monkeys, and infinite number of monkeys typing out the world’s great works on computers.

EM: Still waiting for that one. Tell me about writer/director/producer Jason Devan.

BD: They’re a great family. Jason and Heather and their son Cassius are all a family out of Georgia and it’s a real Mom-and-Pop organization. I love working for them. They’re delightful people. Relatives cooking for lunch. All kinds of things like that. It’s a way I really love to make films, in which, like I said, some of these smaller independent people getting the opportunity to make their own kinds of film, which just really didn’t exist before.

EM: Yeah, I was watching the credits roll and seeing all the Devans showing up and it felt great. A real family affair.

EM: So diving into your storied career, what are some of your personal favorites?

BD: Personal favorites of mine? Oh Gosh, like who are your favorite children? I’ve almost got three hundred to pick from now. Ones that streak to mind are ULZANA’S RAID (1972) which I loved, you know - chasing Apaches with Burt Lancaster. That was a childhood dream come true. Working with Robert Aldrich, that was great fun. LONGTIME COMPANION (1989) I felt was a great opportunity to do that film. SHORT EYES (1977) was one of the more difficult ones but one that people haven’t seen that I was most proud of when I was younger. Now it’s just sort of whatever comes up next. There are a number of shorts. I did a short this last year called THE LIGHTKEEPER that was really good. And the films I made with Randal Kleiser; he made his first student film, a film called PEEGE (1973), which is now in the Library of Congress, and he made it as a student film when he was at USC, which launched his career. Of course, he went on to direct GREASE, BLUE LAGOON, SUMMER LOVERS. Yes, PEEGE is one of my favorites.

EM: When I told my wife I’d be interviewing you today she mentioned you appear in one of her favorite films, GRACE OF MY HEART (1996).

BD: That’s interesting, because I was one of the lesser lovers of Ileana Douglas (GHOST WORLD, STIR OF ECHOES). I got to spend some time with her just last week. We were at Ed Begley, Jr’s birthday party. Got see her.

EM: Nice! I’ll let her know that. So speaking of everything that’s going on now what have you got coming up next? What can we look forward to from you?

BD: Oh gosh, let’s see. I’m starting a film this week called CRONES. And beginning of next year, probably, I’ll be working on a miniseries in Europe about St. Francis of Assisi, playing Pope Urban III during the Crusades. I’ve got a film coming out on the 17th with Treat Williams (THINGS TO DO IN DENVER WHEN YOU’RE DEAD, THE PHANTOM) and Henry Thomas (E.T. – THE EXTRATERRESTRIAL, SUICIDE KINGS), THE GREAT ALASKAN RACE, about the, uh…

BD: Yes, the Iditarod. The first one; it’s about the original one with the diphtheria and Balto and sled and everything. The dog races to save the children.

EM: Well that’s definitely something to look forward to.

BD: Yeah, we got a bunch. There’s also something coming out called MORE BEAUTIFUL FOR HAVING BEEN BROKEN, which is a nice little independent film, which I’m looking forward to. And we’ve got ITSY BITSY which is out now, which is another horror film; a spider movie. And another real creepy one called ALONE, so you’re right: I have been doing a lot of horror lately. That and Christmas films. You know, I’ve got THE GIFT OF CHRISTMAS. So all of that will be coming out shortly.

EM: Well it sounds like you’re living Vincent Price’s dream and I couldn’t be happier for you. Thank you so much for talking to me today. 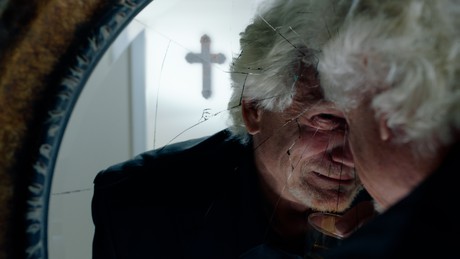 As for the film, writer Jason Devan has crafted a tale of demonic horror that plays mostly by-the-numbers with a few stylistic choices that help it to stand apart from similar titles in the genre. “Stylistic choices” like frequent beheadings, patricide, and necrophilia, to name a few. Yes, this is most certainly not a big studio picture, and there are scenes that could disturb some sensitive viewers. However, if you’re a horror aficionado and don’t really get bogged down by the actual liturgy of exorcism, you may enjoy the blood-soaked climax of this film.

ALONG CAME THE DEVIL II releases in theaters, on demand, and digital tomorrow, October 11, 2019.