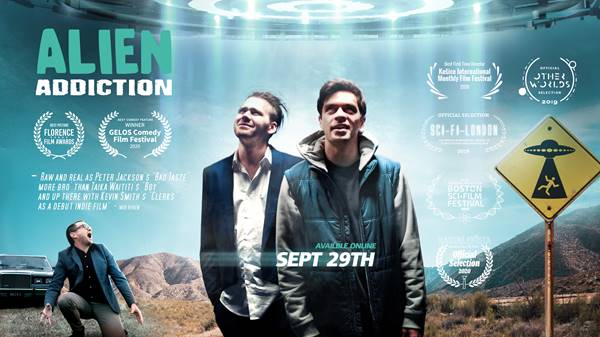 Not All Life is Intelligent…

Hey there, fellow horror geeks and monsterphiles! Prometheus here with something a bit different for you. I pose a question. Do you believe in intelligent life beyond Earth? What about not so intelligent life?

We’ve all watched the movies where aggressive alien species come to Earth and try to take it over, but what if those aliens just wanted to hang out and do funny shit?

Well, then you’d be watching ALIEN ADDICTION, of course!

Okay, let’s talk about that trailer for a moment…

First of all, THOSE ALIENS’ CONCAVED FACES! My only explanation for why that made me laugh so hard is this: Special effects can set (or kill) the tone of a film. The special effects in this trailer are good, but not good to the point of being taken too seriously, and that’s perfect!

My point is, this isn’t Independence Day, or some other blockbuster film about aliens that’s here to wow you with insane special effects and CGI. This is a film that has only one job, and that’s to make you chuckle while you smoke a fatty before bed. If that’s your thing, enjoy!

So, Smoke one for me and watch you some aliens on September 29th, when Gravitas Ventures’ ALIEN ADDICTION hits VOD, DVD and Blu-ray!