Hey everyone!  Barbarella here wanting to talk with you about independent films.  I get that sometimes you just want to see some explosions and car chases or watch Chris Hemsworth or Charlize Theron on a big screen.  However, if those are your only movie experiences, you’re missing out on a great deal of original tales told from different perspectives.  Independent films often don’t have the polished look of a studio film, but sometimes they can surprise you with what they are able to accomplish.  Sci-fi film AFTER WE LEAVE does just that.

Science fiction is a genre that allows for diversity because one could create a world populated with whomever or whatever and approach current issues in a way that is otherworldly.  Doing so could make any topic more palatable to those with different opinions on the subject.  Sadly, independent filmmakers seem to avoid the genre because the studios already do such a great job with flashy effects and mind-blowing world-building.  But Aleem Hossain proves that sci-fi can be done on a ridiculously low budget, and done quite well.

The futuristic elements are minimal in his feature film debut, AFTER WE LEAVE, but they are remarkably well done.  Sure, it helps that his brother, Blaise Hossain, who worked on effects for STAR TREK INTO DARKNESS, did the visual effects for him. He also made the wise decision to enlist the talented cinematographer, Julie Kirkwood.  Her work on Nicole Kidman’s DESTROYER earned a substantial amount of praise.    I’m certain their involvement played no small role in its many awards at festivals last year.  There were downsides to having such talent working for basically nothing, though.  Whenever a big project came their way, Hossain would have to table his film to allow them to go work on the paying gigs.  Because of this flexibility, the film took much longer to complete than originally planned, which makes it feel even more successful to me.

Set in the not too distant future, the rich and lucky escape Earth to live in off-world colonies while minorities and the less fortunate get left behind, struggling to survive on a planet that has squandered most of its resources.

Jack Chaney’s visa to emigrate with his wife, Vanessa, to the off-world colonies has finally been approved.  The problem is that in order to use the visa, he must find Vanessa, whom he abandoned many years prior.  Desperate to start anew and in order to locate her, Jack must seek help from old friends whom he also abandoned.  Brian Silverman deftly plays the part with an interesting blend of drive and defeat.  He carries the aura of a man who’s made mistakes and wrong choices throughout his life, wearing a hint of anguish at all times under the façade he shows to the world.  As the story progresses and we learn more about this man, he starts to understand more about himself and the impact his past actions have had on those around him. 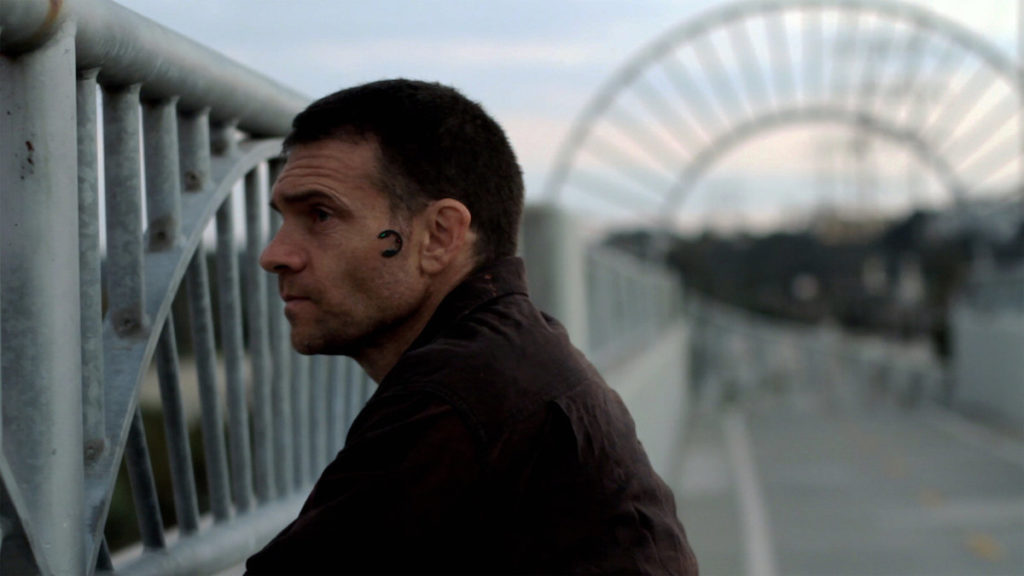 Although science-fiction, the film conveys a human story.  It asks questions about one’s ability to change, how our mistakes weigh on us, and what it means to start over.

I appreciate much of what this film does so well.  Visually and tonally the film hits all the right marks, accentuating the storyline but not distracting from it.  The futuristic vision feels more destined than one with flying cars and holograms everywhere.  I love that, as depressing as it is, this is a believable future for this world.  We see the rich with the opportunity and everyone else stuck scratching and clawing to make ends meet or hopefully getting a ticket via lottery.  Occasionally, I find some of the plot elements a little too familiar.  I could have done without the old if-you-do-this-one-last-thing-for-me-I’ll-help-you scenario.  I also feel that some of the supporting characters could have benefitted from having additional layers to their personalities.  It would have allowed for some more potent interactions and could have made them feel more like people who’ve lived though some things and less like props.  The performances add a little here to offset that somewhat.

While Brian Silverman skillfully traverses the emotional landscape, Aleem Hossain navigates this dystopian world adroitly, ensuring that we not only see what we need, but that we also feel the essence of this era.  Smart choices regarding camera work, music, and futuristic elements guarantee the appropriate ambiance is maintained.

AFTER WE LEAVE gets a limited theatrical release this weekend and will be available on a variety of digital platforms on February 25.  If you’re at all interested in seeing how science fiction can be done for around $30,000, you should check it out.